The Hungarian prime minister has promised a hefty tax on refugee aid organizations as he vies for a third term in office. He warned in his annual state of the nation address that Muslim immigration would destroy Europe. 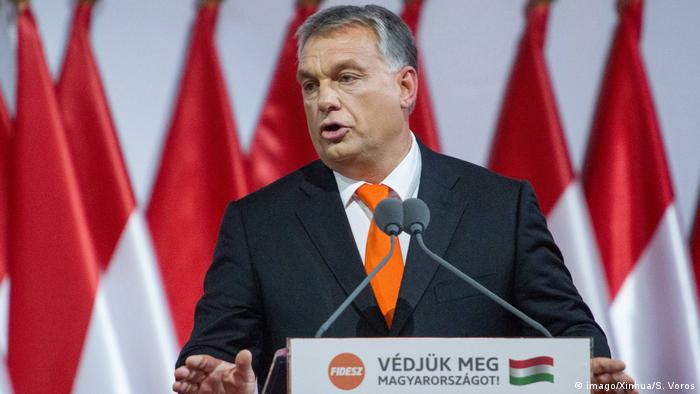 Hungarian Prime Minister Viktor Orban amped up his anti-migrant rhetoric on Sunday as he geared up for national elections on April 8. To that end, Orban's party has proposed new legislation that would penalize NGOs that assist refugees.

"If they do not stop their dangerous activities, we will simply expel them from the land, no matter how powerful or rich they may be," he said during his annual State of the Nation address.

The new law would levy a 25 percent tax on all foreign funding for asylum seeker aid organizations, and bar their workers from entering settlement camps near the country's borders.

Although the prime minister's Fidesz party does not currently have the two-thirds majority in parliament needed to pass the bill, it will likely make significant gains in April's vote.

'The West will fall'

Orban also used his yearly address to suggest that the increase of Muslims in Europe is a harbinger of the fall of Western civilization.

"Dark clouds are gathering over Europe because of immigration," said Orban, who is hoping to be elected to a third term in April.

"Nations will cease to exist, the West will fall, while Europe won't even realize that it has been invaded," he ominously declared. "Christianity is Europe's last hope."

Since Europe's refugee crisis began in 2015, Orban has emerged as one of the most high-profile nationalist voices in the European Union. During the height of the crisis, Hungary enacted some of the most draconian responses to the influx of people fleeing war and famine, such as constructing a razor-wire fence along the border with Serbia.

Orban's time in office has also coincided with a clampdown on foreign influence in the country. Last spring, a bill was introduced to parliament that could potentially shut down foreign-funded universities such as Budapest's Central European University (CEU). Written under the auspices of putting Hungarian universities on a level playing field, many see the legislation as unfairly targeting CEU because it is largely financed by Orban critic George Soros.