Speaking to tens of thousands of his supporters, Prime Minister Viktor Orban used emotive language as he focused on immigration. He has been branded as a racist, xenophobe and bully by the UN's human rights chief. 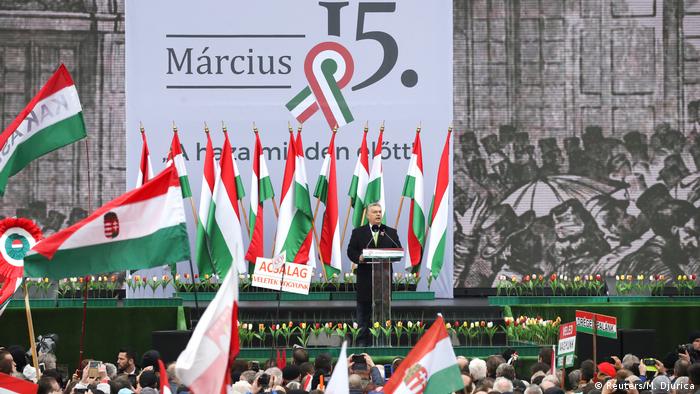 The rally in front of the Hungarian parliament building during a national holiday on Thursday was a large one: Up to 100,000 Orban supporters came to hear the prime minister make a 25-minute speech on what has become the main theme of the elections: immigration.

"They want us to voluntarily give [our country] to others, to foreigners from other continents who don't speak our language, don't respect our culture, laws or lifestyle," Orban told the crowd. "They want to exchange ours for their own. There is no exaggeration in this."

The elections are to be held in three weeks time, on April 8, and Orban has a significant lead in the opinion polls. His policies to block immigration have been the main focus of his campaign to gain the premiership for a third time.

Banners with the words "Homeland before all" and "God protect Hungary and Poland from left-wing ideology!" were prominent in the rally. 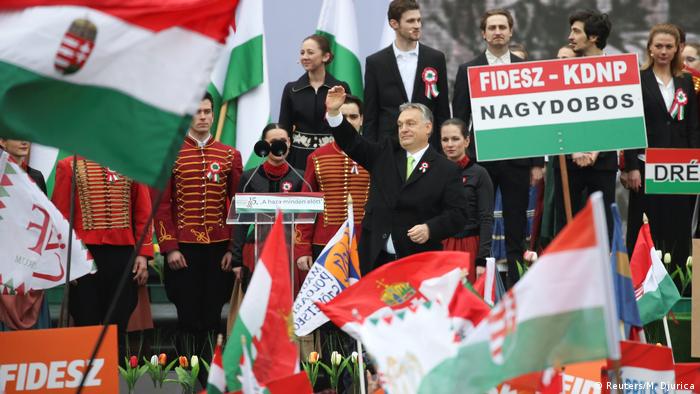 "The situation is that those who don't block migration at their borders will be lost. They will slowly but surely be digested," Orban told the crowd. "The youth of Western Europe will still live to see when they become a minority in their own country and lose the only place in the world to call home."

Buses brought in supporters from towns across Hungary and several thousand Poles traveled to the Hungarian capital to support the rally.

"Large western European countries bit by bit are losing their own countries, they want to force us to do the same," he told the crowd. "Africa wants to kick down our door, and Brussels is not defending us."

Warning for the opposition

Orban also had a warning for the opposition, who he claimed were working with foreign powers to remove the fences his administration had built on the southern border three years ago to prevent migrants coming into Hungary.

"We will take moral, legal and political revenge after the elections," he said, in what some opposition politicians have interpreted as a threat. He also criticized the Hungarian-American billionaire and philanthropist George Soros, placing him among Hungary's historical enemies: The Ottoman Empire, the Habsburgs and the Soviet Union.

Inside Europe: A setback for Viktor Orban

The rally was held on the 170th anniversary of the outbreak of the revolution against the rule of the Austrian Habsburgs in March 1848. A year later, combined Russian and Austrian forces defeated the Hungarians.

There were small counter-demonstrations held in Budapest on Thursday, but the opposition remains fragmented.

In February, Orban's ruling Fidesz party lost a by-election, giving impetus to the idea that the election could be closer than the opinion polls suggest.