Hungary and the EU: Viktor Orban′s battle with the rule of law | Europe | News and current affairs from around the continent | DW | 12.11.2020

Hungary and the EU: Viktor Orban's battle with the rule of law

Hungarian Prime Minister Viktor Orban has threatened to veto the EU budget and coronavirus recovery package and refuses to agree to a proposed rule-of-law mechanism. 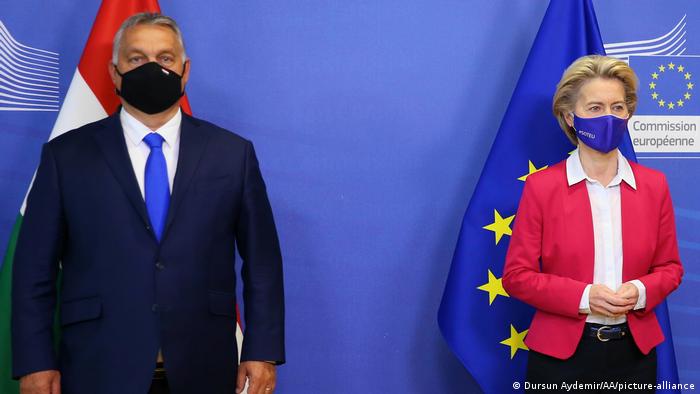 After months of debate, the European Union had finally come to a compromise regarding a mechanism linking EU budgetary funds to respect for the rule of law, an initiative launched by German diplomats. The idea was to create a means of sanctioning member states if they violated EU legal norms and values. The plan was to introduce a new rule-of-law mechanism alongside the EU budget and the pandemic-linked recovery package.

But Hungary and Poland, whose political situations are effectively the reason why the EU launched a debate about the rule-of-law mechanism in the first place, were against it from the start. As a result, most EU member states have agreed to a weaker mechanism, which stipulates that a qualified majority of 15 member states and at least 65% of the EU population is needed for the Commission to be able to impose sanctions on a country, which is by no means an insignificant hurdle.

But even this is too much for Hungarian Prime Minister Orban, who has threatened to veto the EU budget and coronavirus recovery package. In a letter to European Council President Charles Michel, European Commission President Ursula von der Leyen and the German Presidency of the Council that was published last Sunday, he said that the agreement did not meet Hungary's requirements and he could not support it. He added that the mechanism was "defined vaguely " and therefore open to political manipulation.

Orban had made a similar statement just two days earlier in his weekly radio address, once again accusing Hungarian-born US billionaire George Soros of being behind the mechanism. Three years ago, he said that politicians "who ate out of Soros' hands" had agreed to implement his idea to penalize EU states that did not accept migrants.

Orban's Polish counterpart Mateusz Morawiecki has also said that he will not vote in favor of the mechanism but has not gone so far as to suggest he might veto the budget or the recovery package.

If Orban goes ahead with his threat, the whole bloc will enter another serious crisis with consequences that are difficult to predict in the midst of the coronavirus pandemic. It is not yet clear whether diplomats in Brussels and Berlin will continue to seek a compromise with the Hungarian leader, but the budget cannot be passed without his consent. The recovery package, on the other hand, does not require unanimity from all members of the bloc.

The fact that Orban and his government are neither interested in compromise nor in changing their anti-democracy stance is now very clear. On Tuesday, the Hungarian parliament once again granted the executive special powers to rule by decree in an attempt to curb the spread of the coronavirus.

Parliament had already done so in the spring, but this time there is a 90-day limit, which is why most of the opposition also agreed. Earlier this year, Orban made the most of the state of emergency to introduce decrees that had nothing to do with the pandemic but were either detrimental to opponents or beneficial to his close business allies.

Not long after parliament voted, the government announced another constitutional amendment – the ninth in nine years – which has provoked public outrage. It would effectively prohibit LGBT+ couples from adopting children, by saying that in a relationship between parents and a child, "the mother is a woman and the father is a man."

Orban and his cronies are known for their offensive homophobia. In the past, they have likened homosexuals to pedophiles and have denied them equall status to what they called "normal" citizens.

This time, however, Orban might be trying to distract from a proposed political change, which would stipulate that all regulations regarding public foundations and their assets have to be decided by a two-thirds majority in parliament.

It could be a safeguard mechanism for the government's opaque decisions regarding foundations such as the Mathias Corvinus Collegium, an elite training institution, which recently received billions from the state in the form of shares and real estate.

Read more: With Trump out, EU nationalists are down a US ally

On Tuesday, just one minute before midnight, the government also proposed a change to Hungary's electoral law, which would strengthen Orban's ruling Fidesz party and further weaken smaller parties. If it is passed, parties will have to put forward individual candidates in 50 constituencies instead of 27, as is currently the case, in order to be able to appear on a party list.

This would confirm what critics have long been saying: Elections in Orban's Hungary might be free but conditions are increasingly unfair.