The European Court of Justice has ruled that a law on foreign universities operating in Hungary breaches EU law. The measure forced a Budapest university founded by US-Hungarian billionaire George Soros to move abroad. The EU's top court on Tuesday ruled that a Hungarian law that forced the relocation of Central European University (CEU) out of the country was not in line with EU law.

The European Court of Justice (ECJ) ruled against Prime Minister Viktor Orban's government, saying "the conditions introduced by Hungary to enable foreign higher education institutions to carry out their activities in its territory are incompatible with EU law."

Part of the law required foreign universities operating in Hungary to strike a bilateral agreement between the country's nationalist government and the universities' country of origin, and also to offer teaching services in its home country.

The government had rejected a claim by the George Soros-founded CEU that it complied with the controversial law requiring foreign-headquartered universities to operate a campus in their home country.

The ECJ said this infringed on World Trade Organization rules on fair market access and acted contrary to the provisions of the EU's Charter of Fundamental Rights, which protects academic freedom and the freedom to conduct a business.

The CEU — which is registered in the United States where Soros lives but has its main campus in Budapest — said it had complied with the law after opening a facility in the US state of New York. 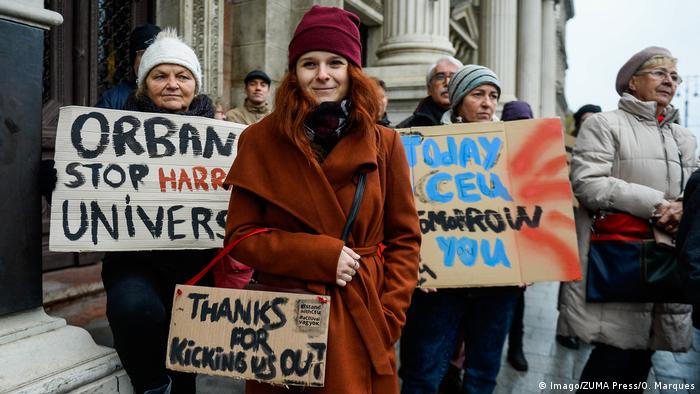 But a Hungarian government spokesperson called the American site "a Potemkin campus" [a reference to the fake villages reportedly set up in imperial Russia to impress the visiting Empress Catherine II — Editor's note] that failed to satisfy the law.

Attracting students from over 100 countries and offering US-accredited master's programs, CEU, founded in 1991, had long been seen by Orban as a hostile bastion of liberalism.

CEU moved largely to Vienna in 2019 in light of Orban's legal challenges.

Orban's government has clamped down on academic freedom more broadly in recent years, for example, by banning universities from teaching gender studies.

Soros has said his support for refugees is part of a larger humanitarian mission to back open societies around the world.

In May 2017, a Soros-backed non-governmental organization, Open Society Foundation, was forced to move its staff and offices to Germany from Hungary after Orban's government instituted new regulations against foreign-funded NGOs.