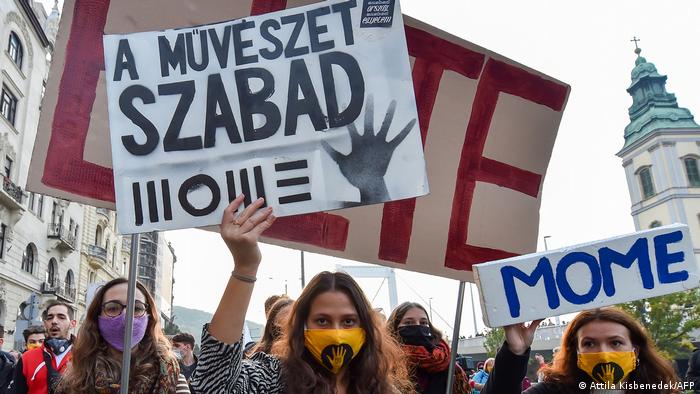 Some 10,000 people marched through the Hungarian capital of Budapest on Friday, expressing their frustration at moves by the government to undermine academic freedom, and in particular over the lack of autonomy for the University of Theater and Film Arts (SZFE).

The demonstration, named "For all of our freedom!" by organizers, took place intentionally on October 23 to coincide with the anniversary of Hungary's anti-Soviet uprising in 1956, a student-led revolution designed to fight back against oppression.

Speakers on Friday accused Prime Minister Viktor Orban of limiting academic freedom and pushing through an overhaul of SZFE's structure without consulting students or staff.

The participants in the protest marched mainly in silence while brandishing placards and banners with slogans such as "Art is free" and "Enough!"

On September 1, Orban's ruling Fidesz party withdrew the autonomy from what is Hungary's most significant training center for theater people and filmmakers.

A board of trustees set up by the right-wing government has since assumed control of practically all management functions while disempowering the elected senate.

The most recent rule-of-law report by the European Commission expressed serious misgivings regarding judicial independence in Hungary, as well as the increasing dismantling of the country's independent media.

The EU's executive branch also aired its unease over corruption in Hungary, highlighted by "tight interconnections between politics and certain national businesses."

Germany's Academy of Arts is forging an alliance in Berlin to fight Europe's biggest enemy of democracy: nationalism.

It's the most visible step by Prime Minister Viktor Orban's government against "gender madness," but it's also part of a broader ideological offensive — one that takes aim at moderates in the ruling Fidesz party, too.

Prime Minister Viktor Orban has come under fire for the removal of a statue of a politician executed by the Soviet Union in the 1950s. Opposition parties accuse Orban's right-wing government of historical revisionism.