Amid whistles from the opposition, Prime Minister Viktor Orban has marked the 60th anniversary of Hungary's 1956 uprising that was crushed by the Soviet Union. Scuffles broke out between his supporters and protesters. 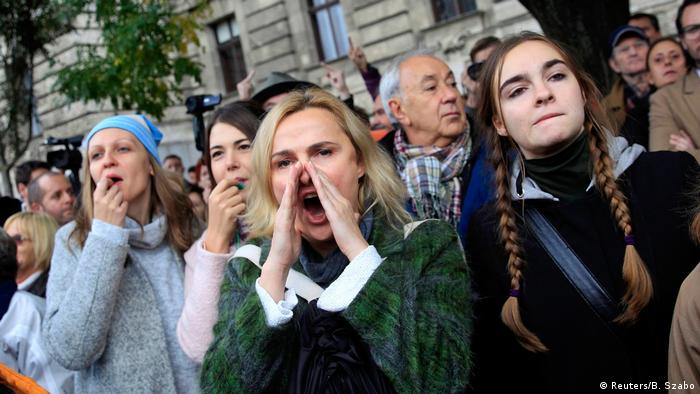 As protesters booed and whistled, Prime Minister Viktor Orban recalled a student march 60 years ago that marked the start of Hungary's uprising on October 23, 1956, describing it as "a revolution against the communist world."

Hungary will reject EU migrant quota plans despite the low turnout that invalidated Sunday's vote, Prime Minister Viktor Orban has said. Playing up his democratic credentials, Orban's move is another swipe at the EU. (03.10.2016)

Speaking in front of several thousand people packed into Budapest's closely guarded Kossuth Square, Orban marked the 1956 revolt that was squashed when the Soviet army sent in 100,000 troops and thousands of tanks. Some 200,000 Hungarians fled, and dissidents including the-then premier Imre Nagy were executed.

Orban's remarks were interrupted by several hundred members of the opposition party Egyutt (Together), which had distributed hundreds of whistles and symbolic red cards for supporters to sound and wave at the gathering.

"Viktor Orban's policies are exactly the kind Hungarians rebelled against in 1956," said Peter Juhasz, a Together vice president.

"Back then, Hungarians stood up to Soviet domination, while today Orban has committed Hungary to Russia for decades," said Juhasz, referring to Orban's deal with Russia to build new nuclear reactors in the Hungarian city of Paks.

Laszlo Barta, an Orban supporter, told the Reuters news agency that Hungary could not establish freedom "while this despicable leftist opposition exists."

Orban, who has led the resistance to the EU's policy requiring all member states to take in some of the hundreds of thousands of mainly Muslim migrants seeking asylum in Europe, also brought up the subject on Sunday. 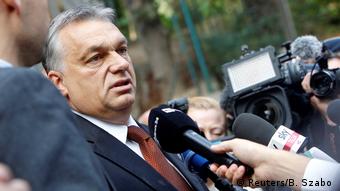 "There is no free Europe without nation states": Orban

"As heirs to 1956 we cannot allow Europe to cut the roots that made it great and helped us survive the Soviet suppression. There is no free Europe without nation states and thousands of years of wisdom from Christianity," he said.

Polish President Andrzej Duda, a guest at the Budapest commemoration, assured Hungarians of support from Warsaw.

"You can count on Poland, we march together in the toughest moments," Duda told supporters. "Two
countries which were built on Christian foundations and are now free in the unified Europe."

Orban's critics have long accused him of weakening Hungary's system of democratic checks and balances, curtailing media freedoms and trying to turning Hungary into an "illiberal state."

According to Jörg Baberowski, who has intensively researched Stalin's reign of terror in Eastern and Central Europe at Berlin's Humboldt University, Central European nations like Hungary and Poland "only joined the EU to safeguard their national sovereignty, not to give it up.

"That's often forgotten and comes from the painful experience of repression and the curtailing of national sovereignty rights," he told Deutschlandfunk public radio on Thursday.

"I wish that at some stage this will be grasped in Brussels and Strasbourg - what significance this had for these countries."