Journalists from Hungary's leading daily have been facing up to the demise of the country's only newspaper of record. They expressed skepticism the closure was motivated by economics, reports Dan Nolan from Budapest. 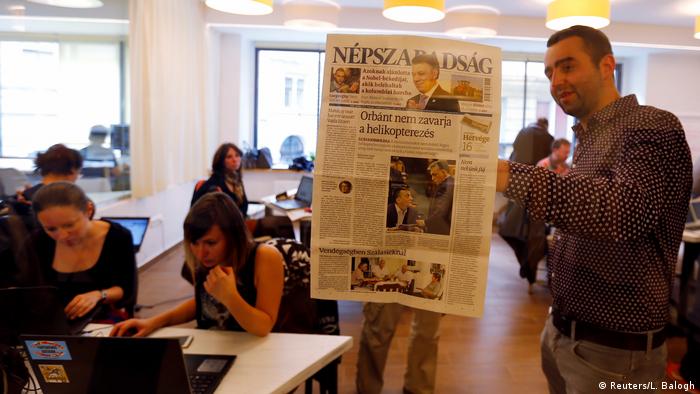 Hungary's government faced renewed accusations of attacking press freedom this week in the wake of the sudden closure of Nepszabadsag.

Having been promised a party with pizza, beer and champagne on Friday, by the following morning the employees of Hungary's leading daily were being refused access to their office and personal possessions. As well as suspending editorial operations, the liberal daily's owner Mediaworks had also closed its servers and shut down the website.

"We weren't told anything and we didn't anticipate this," Nepszabadsag deputy editor Peter Peto told DW.

Readers of nol.hu, the paper's website, were equally astounded to see only a message from owners Mediaworks that production had been suspended while Nepszabadsag found "the best future business model … on a completely new footing."

Meanwhile, Peto said, Mediaworks was employing "psychological terror" on his colleagues on Tuesday. "Staff members were told that our severance payments can be collectively rescinded whenever our employer sees fit - and this restricts our options for action," he said.

"There are a lot of people in economically challenging situations," added Gabor Horvath, a foreign desk journalist at Nepszabadsag. Mediaworks had also "infringed on Hungarian law by not letting the union know in advance of their plans," he noted.

By the time Nepszabadsag got to meet Mediaworks management on Tuesday - Monday's meeting was cancelled, when the acting CEO pled ill health, before resigning - the journalists had already decided to carry on publishing on an alternative online platform. They hoped to negotiate a deal that would allow the daily's 70 journalists and 30 other employees to continue to work under the same name. Instead, they learned that the Nepszabadsag brand was not legally available because it had been used as leverage against a loan from the government-friendly MKBbank in August. Since MKB was privatized, its new owners have been unknown, but local business press suspect them to be proxies of National Bank Governor Gyorgy Matolcsy, a confidante of Prime Minister and Fidesz party leader Viktor Orban. 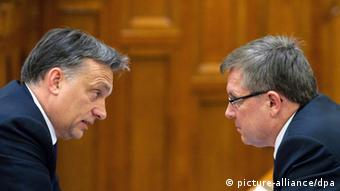 Since 2014, the owner of Nepszabadsag has been Vienna Capital, which is controlled by Heinrich Pecina.

"Pecina is a 'trustee,' or professional straw man," Antonia Radi, a journalist who has reported extensively on the Orban government's media acquisitions for the investigative website Atlatszo, told DW. "Stories of Pecina acting as a proxy for Fidesz oligarchs have circulated for years, but no one has proved them yet. But I think that closing Nepszabadsag was one of the last steps," Radi said.

Orban's alleged proxy, Lörinc Meszaros, a former pipe fitter who has rocketed up Hungary's rich list since becoming mayor of the premier's childhood village in 2011, was reported by local business media on Monday to be planning to purchase Mediaworks.

A journalist at a pro-government outlet told DW that his colleagues had been anticipating a media shake-up. "Then on Friday our boss said that something big is going to happen," said the journalist, speaking on condition of anonymity. Noting that "there are no pro-government newspapers which aren't actually loss-making," the DW source added that the pro-OrbanMagyar Hirlap "has been a sinking ship for years." As an oppositional voice, however, Nepszabadsag has not enjoyed the cushion of lucrative public advertising bestowed on pro-government papers since 2010.

Radi told DW that "If they had had any economic motives, they would not close the paper and the online edition - and they wouldn't delete its archives; a closed daily does not cost any money. They could also have tried to sell it," she said. "Within two days of each other, two CEOs of Mediaworks resigned. There must be a reason beyond economics for that," she added.

In the week after the Hungarian referendum against EU migrant quotas, Nepszabadsag exposed how Hungary's propaganda minister Antal Rogan took a helicopter at huge expense to travel from a wedding on referendum day. Another revealed how Matolcsy had given his girlfriend a string of highly paid jobs. Six days after the invalid referendum, Nepszabadsag was closed.

Nepszabadsag may have also been caught in the crossfire of a battle for Hungary's county newspapers, as Mediaworks recently bought PLT, the editorial board of numerous daily newspapers, from the German media company Funke (previously WAZ), Radi said.

"Government circles really want those newspapers before the 2018 election," Radi said. "Along with the national newspapers of Mediaworks (including the market leading Nemzeti Sport) they will have the print media in 12 of Hungary's 19 counties.

"Most of the Hungarian media knew that Orban oligarchs wanted to buy the county papers," Radi added. "However Fidesz did not want to do the job themselves, so they got Pecina to do their dirty work.

"For Fidesz the referendum was top priority - they did not want any news except about migrants."

The week following the anti-migrant referendum saw Fidesz achieve all-time highs in the polls, and according to the pro-Orban journalist, Fidesz has "waited until after the referendum" to close Nepszabadsag. 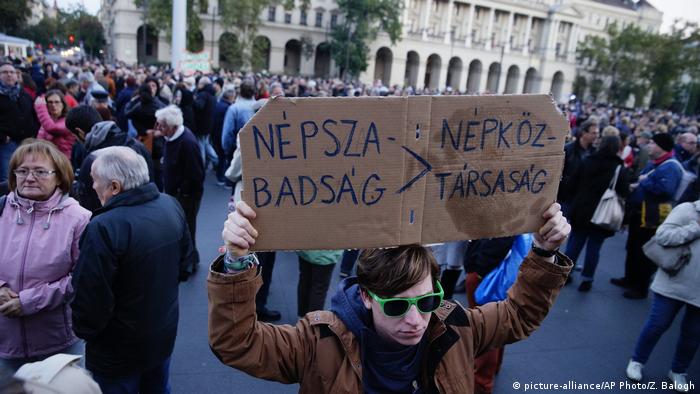 'Power has no limit'

Government politicians have repeated Mediaworks' claim that Nepszabadsag's closure had been economically motivated, noting that it had incurred losses of five billion forints (3.3 million euros/$3.6 million) since 2007.

While Fidesz said it regards the closure as a "reasonable business decision," Nepszabadsag Zrt. (Ltd.) officially made a profit of 139 million forints in 2015, after distribution and advertisement matters had been taken over by Mediaworks. Overall figures are unavailable, however, as Nepszabadsag was swallowed up by the Mediaworks holding company, which made a profit of 500 million forints last year.

Originally founded during the Hungarian uprising against Soviet control in 1956, Nepszabadsag was the official paper of the state communist party but took a left-liberal editorial line in the 1990s and became Hungary's sole newspaper of record. A foundation of the Socialist Party still owned more than 27 percent of Nepszabadsag until 2015, when they sold this to Pecina.

"What we can see with this conflict is that the power has no limit," Peto told DW. "It's unbelievable. There is no Hungarian media landscape now, it's a media desert."

The abrupt closure of Hungary's largest opposition daily has prompted concerns over media freedom in the EU member state. Critics say the Nepszabadsag daily was closed for political reasons. (10.10.2016)