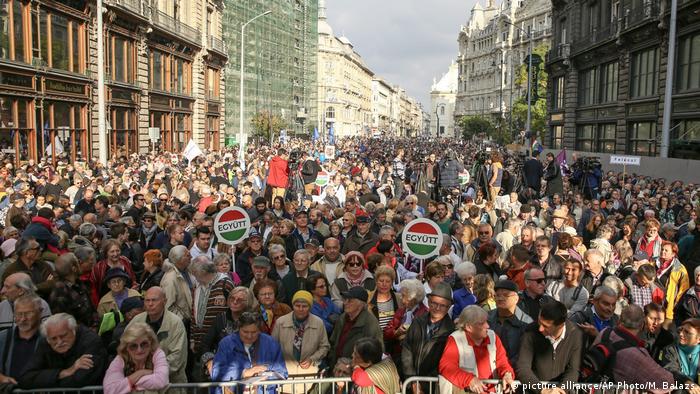 Speakers at Sunday's march - organized by the Together and Dialogue parties on Free Press Road, a traditional location for protests - said the government's aim in shutting down the largest opposition newspaper, "Nepszabadsag," was to cover up corruption and other potentially harmful issues for the ruling party. 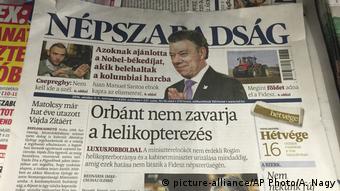 Miklos Hargitai, a "Nepszabadsag" journalist, told the Associated Press that Prime Minister Viktor Orban's government has been the only one since the end of communism in 1990 "which doesn't tolerate any control or criticism, not even questions." He noted that Orban hadn't given an interview to the paper in 10 years.

"We are now contemporaries of a thieving regime, but we don't have to be its accomplices," Hargitai said. "We always have another choice."

"'Nepszabadsag' is a political challenge to the power of Orban and everyone knows that," its deputy editor-in-chief, Marton Gergely, told foreign reporters last week.

The abrupt closure of Hungary's largest opposition daily has prompted concerns over media freedom in the EU member state. Critics say the Nepszabadsag daily was closed for political reasons. (10.10.2016)

Independent media in Hungary have gradually been bought by government-friendly oligarchs, a fate widely expected for "Nepszabadsag." Since Orban came to power in 2010, many print and online publications as well as radio and television stations have come under the control of Orban's inner circle and adopted a largely unquestioning pro-government stance.

For example, some 95 percent of airtime on the recent refugee referendum endorsed the government's position, according to the research group Democracy Reporting International.

"Nepszabadsag" - whose journalists are still under contract, though there's little chance the paper will reopen - was closed down last week without prior warning. Its Austrian owner, publishing company Mediaworks, said the paper's "considerable" losses and falling readership had led to its closure.

Employees, meanwhile, said the daily was part of a deal to purchase several regional newspapers that a media tycoon close to Orban is supposedly buying from Mediaworks.

Officials from Orban's Fidesz party, however, have insisted the paper's closure was purely a financial decision and blamed the Socialist Party, one of whose foundations sold its minority stake to Mediaworks in 2015.

"Contrary to the opposition's claims, the closure of 'Nepszabadsag' was a market, financial and competence issue," the Fidesz press department said in a statement.

"The future of 'Nepszabadsag' was stolen by the current and past Socialist Party leadership, who were incompetent not only to govern the country but also to take care of their party's newspaper."