A province in southern Poland near Krakow has overturned its symbolic anti-LGBTQ designation. The EU held up recovery funds because of the discriminatory declaration. 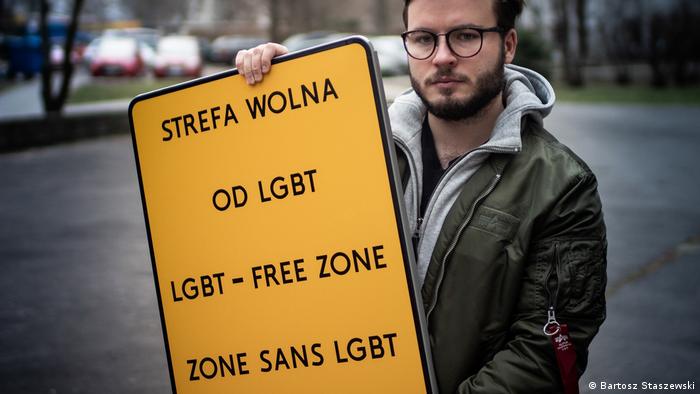 Polish activist Bartosz Staszewski, holding a removed sign, said it was a 'great day for Poland'

The Swietokrzyskie province in southern Poland has repealed its resolution declaring itself to be an "LGBT ideology free zone" in an extraordinary session of the provincial assembly.

The 2019 declaration in "opposition to LGBT ideology" was scrapped after the European Commission suspended negotiations on providing post-pandemic funding to the province. Switeokryzskie was part of a wave of 100 cities and regions that declared themselves "LGBT free" on the urging of the ruling Law and Justice party.

While no councilors voted against the repeal of the designation, three abstained and 25 voted to support the repeal.

"The European Commission has stressed that it is against Article 2 of the European Treaties to define areas, workplaces or services as LGBT-free," Andrzej Betkowski, head of the Swietokrzyskie provincial administration, made clear during the extraordinary session.

In its place, the assembly supplanted the legislation with a new resolution stating the Polish Constitution guarantees families the right to raise their children in accordance with their beliefs but also provides "a guarantee of equality and fair treatment for all.''

Wednesday's vote overturning the "LGBT ideology free zone" designation in Swietokrzyskie dates to mid-July when the European Commission launched legal action against Poland and Hungary for discriminatory laws against the LGBTQ community.

In the Polish case, the European Commission was acting against the proliferation of "LGBT ideology free" cities whereas in Hungary, it was an anti-pedophilia measure that conflated pedophilia with homosexuality in banning the "promotion" of homosexuality and transgender individuals to those under 18 years of age.

LGBTQ rights activists in Poland have welcomed the move and expressed gratitude to the EU, which had reacted to the Polish anti-LGBTQ designations by declaring the entire 27-nation bloc a "freedom zone" for LGBTQ people.

Activist Bartosz Staszewski told The Associated Press it was a "great day for Poland and great success of activists and civil society."

Polish newspaper Gazeta Wyborcza hailed the repeal, calling it "a good day in the fight against discrimination."