The resolution seeks to ensure freedoms for the lesbian, gay, bisexual, transgender, intersex and queer communities across the bloc. The move is seen as a swipe at conservative authorities in Poland and elsewhere. 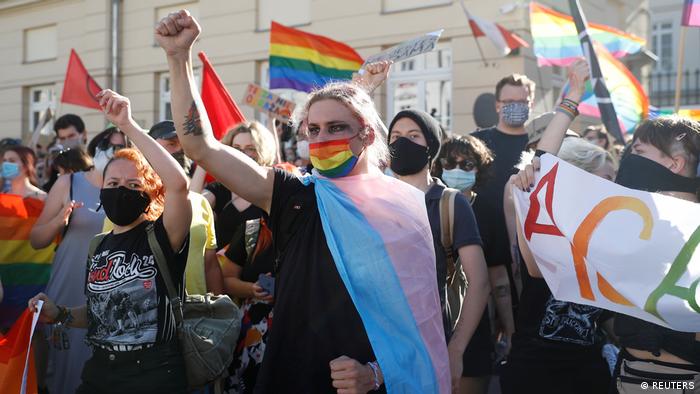 The European Parliament passed a resolution on Thursday declaring the European Union a "LGBTIQ freedom zone."

The measure seeks to ensure protections for the lesbian, gay, bisexual, transgender, intersex and queer communities across the bloc, while also pushing back against member states with anti-LGBT+ policies.

"LGBTIQ rights are human rights," the resolution reads. The measure passed with the support of 492 lawmakers, while 141 voted against and another 46 abstained.

The cross-party measure targets "growing hate speech by public authorities and elected officials," according to the text.

The resolution specifically called out Polish President Andrzej Duda, who won re-election last summer after often speaking out against LGBT+ rights, and depicting members of the community as a threat to families.

Hungary was also highlighted in the resolution for having "severely hindered" fundamental rights due to a de facto ban on legal gender recognition for transgender and intersex people.

The resolution not only focused on Poland and Hungary, but also criticized other alleged discriminatory legislation and practices across the 27-nation bloc.

"While LGBTIQ persons in Poland face systematic discrimination, this is also an issue across the EU, with little to no progress being made in alleviating the persistent discrimination against and harassment," it said.

The Polish government came out against the measure, arguing that as a sovereign nation and a more conservative society, that it has the right to defend what it views as traditional family values.

German MEP Terry Reintke, one of those who put forward the resolution, hailed the "overwhelming majority" supporting it.

European Commission President Ursula von der Leyen had already backed the move ahead of the debate in parliament.

"Being yourself is not an ideology. It's your identity. No one can ever take it away," she wrote on Twitter on Wednesday.

Prior to the resolution passing, DW spoke with Evelyne Paradis, the executive director of ILGA-Europe, an NGO that advocates for human rights and equality for LGBT+ people.

Paradis said the initiative was "an important message of support, certainly for LGBT+ people across the European Union and beyond."

Why was the resolution passed?

Since 2019, over 100 municipalities in Poland have instituted resolutions declaring themselves to be "LGBT-free zones." Similar restrictive policies have been enacted under Hungarian Prime Minister Viktor Orban's government.

As of now, the EU resolution is symbolic. Although this is seen as victory for LGBT+ rights, many hope that action will follow.

"Well, it will be an empty gesture if it's not accompanied by action," said Paradis, "action on many fronts, action on the front of the European Union and the European Commission," she added.

Those actions could range. In Poland where, those who are politically active in the LGBT+ community "have been receiving death threats," said Paradis.

There is also no mention in the Polish penal code that addresses homophobic crimes specifically, so police don't keep statistics of such crimes, according to Kuba Gawron who has been documenting local anti-LGBT+ resolutions with the group Atlas of Hate.

It also address that only two EU states — Malta and Germany — have banned "conversion therapy,'' a controversial and potentially harmful attempt to change a person's sexual orientation.

Judges ruled that the activists did not commit a crime by producing and distributing images of the Virgin Mary and baby Jesus with rainbow halos.