Judges ruled that the activists did not commit a crime by producing and distributing images of the Virgin Mary and baby Jesus with rainbow halos.

A Polish court on Tuesday acquitted three activists who were accused of desecration and offending religious sentiment for altering, producing and distributing images of a revered Roman Catholic icon that included the LGBT rainbow.

The posters used rainbows as halos in an image of the Virgin Mary and the baby Jesus. Their aim was to protest what they considered the hostility of Poland's influential Catholic Church toward LGBT people.

The court in the city of Plock, where they distributed the images in 2019, ruled on Tuesday that they did not see evidence of a crime.

They found that the activists were not motivated by a desire to offend anyone's beliefs, but rather to defend those facing discrimination, according to Polish media.

"The goal of the activists... was to show support to LGBT individuals, to fight for their equal rights," Judge Agnieszka Warchol said.

The case was seen nationally as a freedom of speech test under a deeply conservative government that has been pushing back against secularization and liberal views.

One defendant, Elzbieta Podlesna, said the action came in response to an installation at the city's St. Dominic's Church that associated LGBT people with crime and sins. 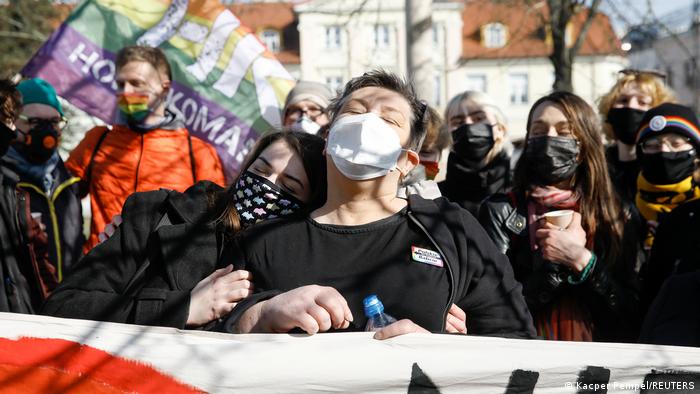 Elzbieta Podlesna and Anna Prus join people who gathered in solidarity with them, after the Polish LGBT activists were accused of offending religious beliefs by putting a rainbow on a painting of Virgin Mary, in Plock, Poland, March 2, 2021

How did the defendents react?

In an interview with DW, Elzbieta Podlesna said she and the other defendents "are pleased" by the court ruling.

However, "it is not the end of the battle" since the prosecutor has said that he will appeal the decision.

She added that it is very significant that the judge said "so many important words for LGBT people, including saying that the rainbow does not offended anybody and does not offend religious feelings," said Podlesna. 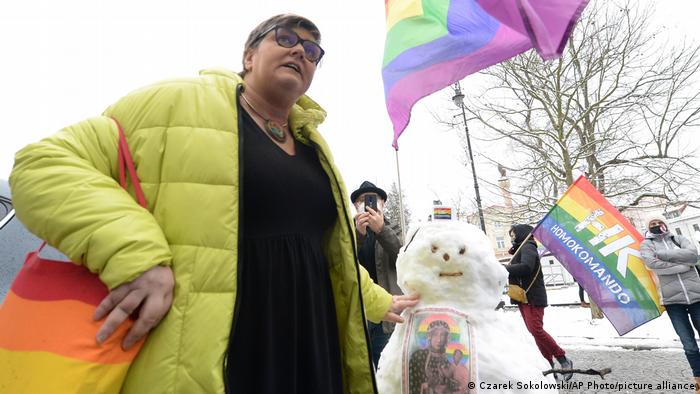 Elzbieta Podlesna, an LGBT and human rights activist, who was tried for adding the rainbow symbol to images of the Black Madonna, walks outside the provincial court in Plock.

What motivated the LGBT activists?

She and her fellow defendents altered the image of Our Lady of Czestochowa "as an act of protest" against the homophobic installation.

"Now that hate speech is concentrated on LGBT persons, we decided that it's our duty to protect them. If the church, which is said to be full of love, attacks them, then somebody has to protect them," she said.

Podlesna and the others acted in response to the culture of "fear" and government "reigning based on the rule of finding a scapegoat."

"We know it very well from the past," she said. The Law and Justice party came to power "by raising the fear  of immigrants. That was the reason of the first success. But nobody wanted to come to Poland after this. Who would want to come to such a xenophobic country?," she asked.

"So they invented another scapegoat: LGBT people," said Podlesna.

What does the court decision mean?

She and the other two activists — Anna Prus and Joanna Gzyra-Iskandar – faced up to two years of prison if found guilty.

An LGBT rights group, Love Does Not Exclude, welcomed the ruling as a "breakthrough."

"This is a triumph for the LGBT+ resistance movement in the most homophobic country of the European Union,'' it said.

The image at the center of the case involved an alteration of Poland's most-revered icon, the Mother of God of Czestochowa, popularly known as the Black Madonna of Czestochowa.

The original has been housed at the Jasna Gora monastery in Czestochowa — Poland's holiest Catholic site, since the 14th century.

Podlesna was arrested in a raid on her apartment in 2019, held for several hours and questioned over the posters.

A court later said the detention was unnecessary and ordered damages of about $2,000 (€1,662) awarded to her.

Because of all the attention the altered icon has received, the rainbow halo image is now recognized nationwide and is often seen in street protests.

'Your body is a battleground': Iconic pro-choice poster returns to Poland

Artist Barbara Kruger's pro-choice poster has reappeared in Poland as a protest against the country's tightening of abortion restrictions. It was first seen there in 1991.