German campaigner Peter Steudtner is among the 11 human rights activists on trial in Turkey who face accusations of belonging to and aiding terror groups. Critics say the charges are politically motivated. 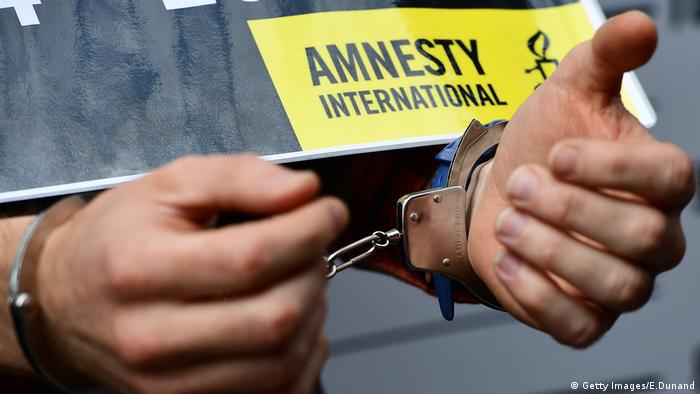 The trial of the 11 activists was set to begin on Wednesday, with the defendants facing up to 15 years in jail on terrorism related charges.

Those on trial include the local heads of rights group Amnesty International, Idil Eser and Taner Kilic, as well as German national Peter Steudtner and Ali Gharavi from Sweden.

The charges against them have been criticized by the United States and European Union, with Germany calling the allegations politically motivated and "absurd."

Ten of the defendants were detained at a human rights workshop on July 5 on the island of Buyukada, near Istanbul. Amnesty Chair Kilic was arrested weeks earlier and his case later folded into the Buyukada case.

"Turkey has jailed these people, just like they have jailed hundreds of journalists, fueling the propaganda that human rights defenders are somehow dangerous and must be stopped. This is ridiculous and simply not true," Amnesty said in a statement ahead of the trial. "These people were peacefully protecting other people's human rights in Turkey. Every day that they are detained, the people they spoke up for are left more vulnerable to the government's sweeping crackdown."

Lawyers for the defendants have said the indictment lacks evidence and leaks to pro-government media led to a smear campaign to influence public opinion and the trial.

All 11 face accusations of "aiding armed terrorist organizations" through civil society actions and seeking to create "chaos in society."

"The suspects … organized activities and meetings about the methods and tactics which are adopted by terrorist organizations, and which are also crucial for the continuation of their activities; organized meetings and activities in order to generate movements that would give rise to social chaos like the Gezi Park (protests)," the prosecutor wrote in the indictment, referring to the June 2013 protests in Istanbul.

Adding to the murkiness of the indictment, the human rights activists stand accused of being members of the outlawed Kurdistan Workers' Party (PKK), far-left DHKP-C and the Gulen movement, which Turkey blames for last year's failed coup attempt. The three groups are rivals. The PKK, for example, is a communist Kurdish nationalist movement and the Gulen movement a global Islamist movement with strong Turkish nationalist undertones.

Since last year's failed coup attempt, more than 50,000 people have been detained and some 150,000 sacked from their jobs under a state of emergency that gives the government sweeping powers.

The extent of the crackdown has heightened international concerns about the deterioration of the rule of law in Turkey and a politicized judiciary.

Under Turkey's current state of emergency, drawing a cartoon that lampoons politics could land you in jail. Despite the crackdown, cartoonists in the country say they are not running out of inspiration. (18.10.2017)

Inside Europe: In Turkey, big brother is watching your taxi