Amnesty International has described terror charges against its head in Turkey as a "mockery of justice." He is the latest victim to be wrapped up in a crackdown on critical voices and dissent. 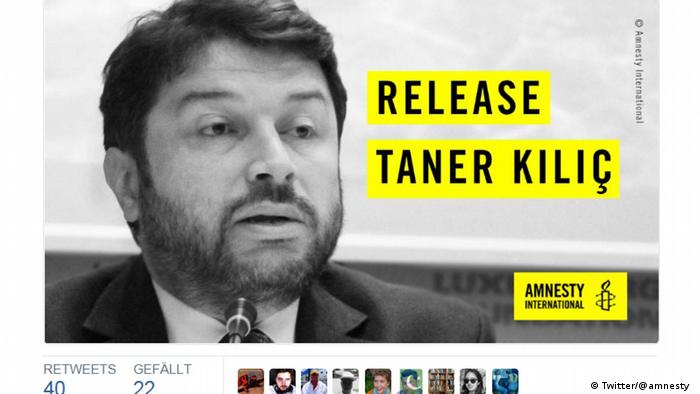 The head of Amnesty International in Turkey was charged on Friday for alleged links to the Islamic movement authorities blame for last year's failed coup attempt, the rights group said.

Taner Kilic was remanded in pre-trial detention and charged with "membership in a terror organization" after being arrested earlier this week in the western city of Izmir alongside 22 other lawyers.

"Imprisonment of our Turkey Chair is mockery of justice," Amnesty's Turkey researcher Andrew Gardner said in a statement released Saturday about the hearing the night before.

More than 50,000 people including soldiers, civil servants, teachers and academics have been arrested in a massive crackdown since last July's failed coup attempt. Over 100,000 others have been dismissed from their jobs under sweeping emergency powers granted to the government in the wake of the coup attempt. Hundreds of media outlets, NGOs and rights groups have also been shuttered.

The government accuses the arrested and dismissed of links to the movement of US-based preacher Fethullah Gulen, a former ally of President Recep Tayyip Erdogan who authorities say orchestrated the coup attempt. The Gulen movement denies any involvement.

"Taner's arrest highlights not just a disregard for human rights, but a desire to target those who defend them," he added.

Authorities accuse Kilic of having the encrypted messaging app Bylock on his phone since August 2014. Thousands of people have been arrested for having the messaging app, which authorities say Gulen followers used to communicate and plan the coup attempt in secret.

Amnesty said no evidence has been presented to substantiate the allegations. It said Kilic never had the app on his phone, and had never heard of it until it was widely reported in connection with detentions and prosecutions.

"Taner Kilic is neither a supporter nor a follower of the Fethullah Gulen movement and has in fact been critical of its role in Turkey. The only evidence brought against him is the alleged presence on his phone of a secure communications platform that would not, even it were true, be evidence of a criminal act. He must not face trial on the basis of such flimsy and inadequate accusations," said Shetty.

Eight other lawyers arrested earlier this week were also charged.

Germany's government has recommended pulling the Bundeswehr from the Incirlik air base. Defense Minister Ursula von der Leyen said earlier that the troops at Incirlik could be moved from Turkey to a base in Jordan. (07.06.2017)

The Aydinlik newspaper has reported the arrest of its editor-in-chief, Ilker Yucel. The apparent cause was an unpaid fine for an article about President Erdogan's son-in-law published in 2014. (03.06.2017)