German Chancellor Angela Merkel has called for the EU to cut funding for Turkey linked to its bid to join the bloc. While raising concerns about the rule of law in the country, she praised Ankara's support for refugees. 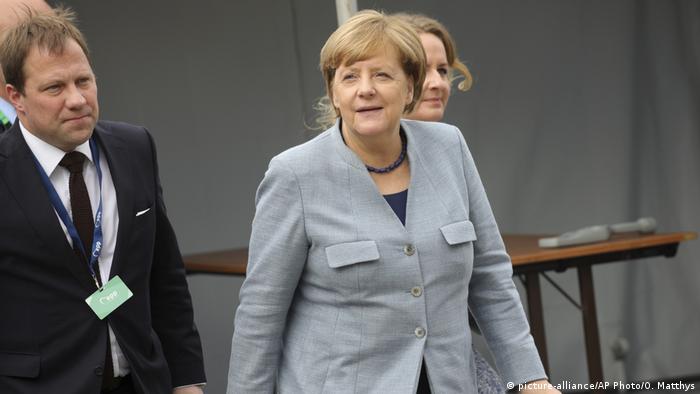 As she arrived at an EU summit on Thursday, Merkel said she considered developments in Turkey "very negative" in terms of European democratic values.

"Not only are Germans being arrested, but the entire rule of law in Turkey is moving in the wrong direction. We are very worried about this. And I will back a reduction in pre-accession funds," Merkel said.

Read more: Can Merkel push the EU toward a new Turkey policy?

Ankara is set to receive 4.4 billion euros from the EU in pre-accession support between 2014 and 2020.

NATO ally Turkey's drawn-out bid to join the European Union has stalled amid a crackdown on dissent and political opponents of President Recep Tayyip Erdogan. A failed coup attempt in 2016 led to wide-scale purges of the armed forces, state institutions, media and academia.

Some 50,000 people have been jailed pending trial. A referendum this year giving Erdogan sweeping new powers, which rights groups say lack checks and balances, is seen as another roadblock to EU membership.

However, Merkel stopped short of calling for the EU and Turkey to now abandon the more than a decade-long push for Turkey to join the bloc. Many European politicians, including Austria's likely next chancellor Sebastian Kurz, have called for negotiations to be broken off.

Praise for taking in refugees

At the same time, Merkel also said that the European Union would keep its side of a refugee deal struck with Ankara in 2016. The deal largely stopped people traveling to Europe via Turkey in smugglers' boats to seek asylum in large numbers.

"I will also make clear that Turkey is doing a great job on the refugees and that we have obligations under the EU-Turkey deal. We have promised 3 billion euros for the coming years in addition to the 3 billion that we have already committed. We need to deliver on this promise," she added.

Turkey, a country of 80 million people compared with the EU's 500 million, hosts more than 3 million refugees and asylum seekers, mostly Syrians who fled the war in their country.