Can Merkel push the EU toward a new Turkey policy? | Europe| News and current affairs from around the continent | DW | 04.09.2017

Can Merkel push the EU toward a new Turkey policy?

In the middle of Germany's election campaign and after 12 years of talks, Chancellor Angela Merkel may push for an end to accession talks with Turkey. It would be an overdue step. DW's Bernd Riegert offers an analysis. 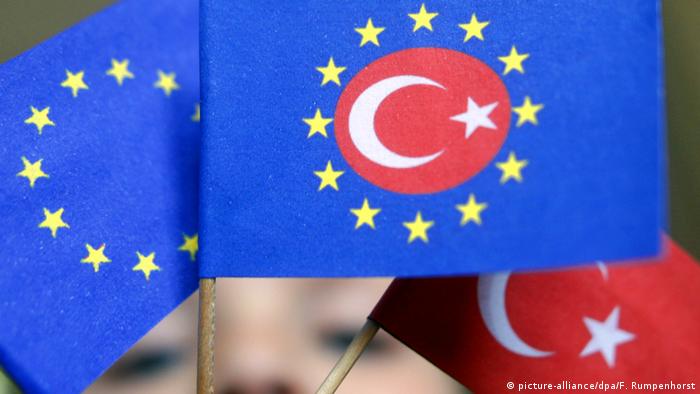 EU accession for Turkey is effectively over. Negotiations that began in 2005 may be soon declared dead, and the government – or, better said, regime – of President Recep Tayyip Erdogan is responsible. Turkey has neither met EU requirements nor appears anywhere close to doing so. Turkey's April referendum effectively turned the state into an autocracy, thereby ending the possibility of joining Europe's community of democratic states. This much is clear based on regular EU reporting. 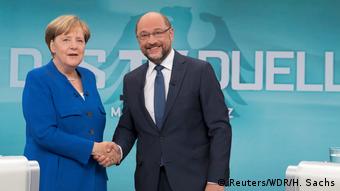 Chancellor Merkel and her challenger, former EU Parliament President Schulz, have both recently reversed course on Turkish membership in the EU

Turkey's rule of law has deteriorated since the failed coup one year ago, and has flipped Germany's Social Democrats (SPD) on the matter of Turkey's EU candidacy. In April, German Foreign Minister Sigmar Gabriel expressed his hope that Turkey would remain a candidate for EU membership.

By August, he had given up that position in light of Ankara's aggressive actions. Martin Schulz, the SPD chancellor candidate and longtime advocate of Turkey's membership, has taken a similar step, calling for an end to talks. During Sunday's televised chancellor debate, Merkel stated what has been obvious for months: "There cannot be a Turkish accession to the EU."

Merkel's comments hardly say anything new. Last week, European Commission President Jean-Claude Juncker said in Brussels that Turkey had already taken huge steps away from Europe, making membership impossible. An official decision to expel Turkey from talks could come as early as this weekend's foreign ministers' meeting or at an EU summit at the end of October. Making good on the unavoidable would be a dramatic turn of events after 12 years: slamming the door to the EU on Turkey.

Juncker had previously warned that Erdogan will have good reason to blame the EU for the failure. However, that would not make the damage any worse. An end to accession talks could also be an end to financial support for accession. So far, suspending payments has been illegal, although the EU has been paying just a small portion of them since 2013.

Turkey-EU relations could hardly get any worse. A July meeting between Turkey's foreign minister and the EU's foreign affairs representative showed how little chance there was at renewed progress. The EU ending accession talks would be unprecedented in its history, but at most symbolic. In reality, talks have been on ice since December, when the Council of the European Union refused to open the next chapter in the negotiation process.

Negotiations have effectively gone nowhere since their start 12 years ago because Turkey has repeatedly refused to recognize Cyprus' membership in the EU, an island whose northern half remains occupied by the Turkish military. Even without Turkey's dramatic descent into dictatorship in the last year, this alone shows that Turkey was never really serious about EU membership.

EU social democrats were the most hopeful for Turkey's membership in 2005. At the time, Erdogan was Turkey's EU-friendly prime minister. That hope waned as Erdogan moved ever further away from European values and, with them, EU accession criteria.

Angela Merkel, who was at the time parliamentary opposition leader, spoke out against membership even then. Her conservatives were satisfied with a "privileged" partnership for Turkey. She continued her resistance to membership even after she became chancellor, which meant inheriting negotiations from her predecessor, Gerhard Schröder of the SPD.

Not the ultimate end

But even if accession talks should come to an end, Turkey and the EU are tightly connected both politically and economically. The German government needs to maintain lines of communication with Ankara so it can look after the 50 German citizens currently sitting in Turkish prisons. Turkey wants to maintain its important customs union with Europe, or even expand it, which the EU can use to ensure Turkey continues holding up its end of the refugee deal. Security issues regarding NATO and confronting the so-called "Islamic State" are additional points on which the EU and Turkey need and want to cooperate.

What about the danger of Erdogan completely turning away from the West and cozying up to Russian President Vladimir Putin? Although Erdogan has not threatened Turkey's NATO membership, relations with the Trump administration are tense. In addition to energy, analysts in Brussels worry that Russia could supply Turkey with weapons, such as missile systems.

An end to EU accession talks would be painful, but not the end to all relations with Turkey. However, it is clear that Turkey is not a European state with respect to Article 49 of the Lisbon Treaty, which outlines accession. Holding Turkey's feet to the fire could be a lesson for other member candidates, such as in the Balkans. Should Bosnia-Herzegovina, Macedonia, Serbia or Kosovo stray from EU membership criteria, the process can be reversed for them, as well.

The Turkish president's attempt to move against supposedly "anti-Turkish" Germans elsewhere in the EU have been scuppered, for now. Some plain speaking by Berlin helped put a stop to it, says DW's Jens Thurau. (20.08.2017)