In his first speech to parliament after the summer break, Turkish President Tayyip Erdogan targeted the European Union. It had failed to help Turkey in the fight against terrorism, he said. 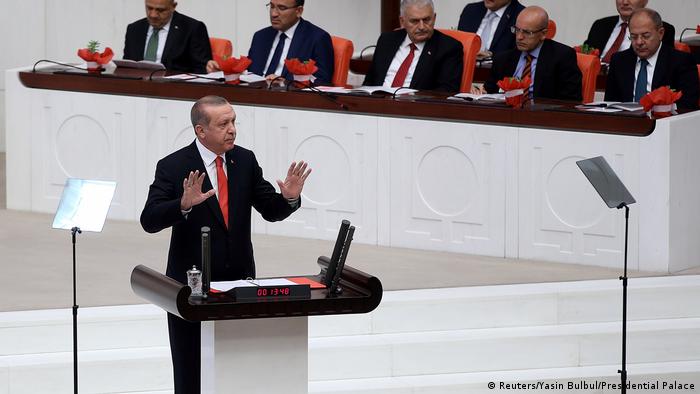 Speaking to parliament on Sunday, President Tayyip Erdogan had some strong words for the European Union and Turkey's 12-year accession talks, which have ground to a halt.

"We will not be the side which gives up. To tell the truth, we don't need EU membership any more," Erdogan said.

Relations between the EU and Turkey have deteriorated in the year since the failed coup of July 2016 and the subsequent government crackdown on opponents and the media.

Over the year since the coup attempt, some 50,000 people, including teachers and journalists, have been remanded in custody, and 170,000 suspects investigated for alleged links to US-based cleric Fetullah Gulen. Erdogan's government accuses Gulen of having masterminded the coup.

"The EU failed us in a fight against terrorism," Erdogan said on Sunday. "Today, Europe has become a place where terrorists can move around freely and carry out all kinds of activity against Turkey's legitimate administration."

"We are extremely uncomfortable with those who openly hinder Turkey's EU membership but adopt a tolerant attitude towards terrorist organizations," he said, referring to supporters of Fetullah Gulen and to the outlawed Kurdistan Workers Party (PKK). He said EU states had failed to respond to requests to extradite individuals accused of involvement in the failed coup.

But he also suggested the EU still needed Turkey.

"If the EU is going to leap forward, there is only one way to do so. And it is to grant Turkey membership and start an action of cultural and economic growth," Erdogan said.

However, during the election campaign, Chancellor Angela Merkel said she would suggest suspending or ending accession talks with Turkey at an upcoming October meeting of EU leaders.

Last November, in a symbolic vote in response to the crackdown following the coup, the EU Parliament urged governments to freeze EU membership talks with Turkey.

But European Commission President Jean-Claude Juncker told the Monday edition of Germany's Bild newspaper that it would be a mistake for the EU to abandon accession talks completely - in light of "a significant portion of Turkey's civil society that is open to Europe."

Several German citizens have been detained in Turkey on political charges in recent months. Authorities in Berlin have insisted they are innocent and are being held unjustly.

Relations between the two countries have been further strained after Turkey refused to allow German lawmakers to visit military personnel at the Incirlik Air Base.

Berlin blocked speeches by Turkish officials in Germany amid campaigning for Turkey's April referendum on constitutional reform, and Erdogan urged the sizable Turkish population in Germany to vote against Merkel in Germany's federal elections last month.

Turkey's president needs enemies to mobilize supporters, says journalist Baha Güngör. Erdogan's influence on Turkey is the topic of his latest book, "Ataturk's Angry Grandchildren." But where does this anger come from? (14.09.2017)

Armenian PM marches through capital, warns of 'coup' 2h ago

Man charged with passing Bundestag details to Russia 3h ago