How to watch the Trump-Biden debate tonight

DW will broadcast the first US presidential debate between Donald Trump and Joe Biden tonight. Here’s a look at what viewers can expect and when to tune in. 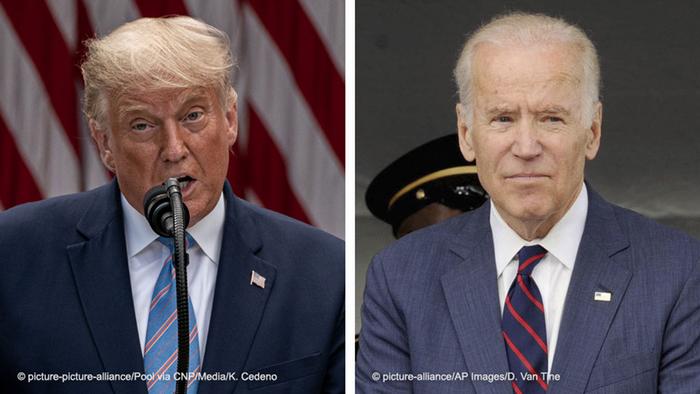 Just five weeks before the 2020 US presidential election, President Donald Trump and Democratic challenger Joe Biden will collide on Tuesday night in the first of three televised debates.

The high-stakes showdown will provide a chance for both candidates to make their case to the roughly 9% of the electorate that is still undecided.

The debate will begin at 9:00 pm Eastern Standard Time (01:00 GMT/UTC, 03:00 CET, 04:00 EEST) and will be broadcast by DW online and on television. A live feed can be accessed on DW’s website and YouTube channel from anywhere in the world, or viewers can tune in however they access DW.

Biden and Trump will meet at Case Western Reserve University in Cleveland and due to the coronavirus pandemic, the in-person audience will be limited and socially distanced.

How can I watch it?

On TV — Watch the DW News channel on your TV

Who's leading the race?

Joe Biden has held a consistent lead over President Trump in national opinion polls that survey the popular vote. But the US election is won by the number of votes in the electoral college, where each state has a certain amount of points. In 2016, Donald Trump lost the popular vote by nearly three million, but still prevailed by winning more states than Hillary Clinton.

Current surveys of so-called battleground states, which each candidate need to clinch in order to win, show a much closer contest, with razor thin margins in critical states such as Florida and Wisconsin.

Voting is already underway in some of these states and partisan views are deeply entrenched, leading to a majority of voters having already committed to one of the two candidates.

What are the debate topics?

Each of the three debates is usually divided into categories, such as domestic issues or foreign policy issues. This first debate will cover mostly domestic US topics, which include the coronavirus pandemic, the economy, racial turmoil in US cities and election integrity.

The political records of both Trump and Biden will also be brought into focus. Viewers can expect two additional, non-scheduled new developments to appear in the debate. One of those is the recent passing of US Supreme Court Justice Ruth Bader Ginsburg and the controversy around her replacement.

The other contentious topic would be the recent report by The New York Times revealing Trump’s tax information, where the president allegedly paid little to no taxes for several years and is deeply in debt.

Can Trump rebound? Will Biden falter?

Trump is expected to level deeply personal attacks against Joe Biden, as the president has been known to deliver acerbic performances on the debate stage.

He regularly calls the 77-year-old Biden ''Sleepy Joe'' and the Trump campaign has argued that the former vice-president is not mentally or physically fit for the job.

Biden, who has decades of public service under his belt, is a far more experienced debater who should have the advantage, but he had uneven performances during this years’ Democratic primary and has a reputation for misspeaking or committing gaffes.

With only 35 days to change the course of the race, the first debate offers an opportunity for Trump to reverse course, to impact the campaign, while Biden is expected to stay focused on his message that this year’s election is a referendum of Trump’s mishandling of the pandemic and overall divisive style of politics.

What’s in it for Europe?

For European viewers, the first debate can offer a glimpse into the key issues that may decide the US election and in turn, the fate of transatlantic relations.

Relations between the US and Germany are currently at an all-time low. Trump has led a confrontational ‘America First’ policy with Europe, imposing tariffs on European products and chastising NATO members for not spending enough on defense.

The three debates will provide an opportunity for Europeans to hear from Biden about his own leadership style and about the kind of US government he would run, should he defeat Trump in November.

While Biden may offer a reversal of Trump’s worst foreign policy impulses, it is still unclear to Europeans if the former vice-president can offer renewed transatlantic engagement or if the intense focus on domestic issues will yield another four years of a US in retreat.

The Democratic Party's White House nominee is polling ahead of Trump, but the president is seen as stronger on the economy. Joe Biden has six weeks to convince voters he can beat the pandemic and turnaround US fortunes.