House Speaker Nancy Pelosi said Donald Trump's debts were a "national security" issue, while Joe Biden's campaign criticized the US tax system. But high-ranking Republicans did not comment on the revelations. 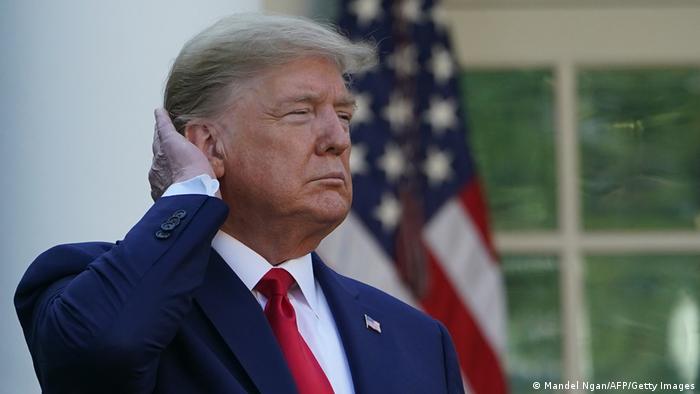 US Democrats went on the attack on Monday after a report by The New York Times (NYT) revealed that President Donald Trump paid little to no income tax in recent years and held large amounts of debt.

House of Representatives Speaker Nancy Pelosi told MSNBC the US public deserves to know to whom he owes money. If it involved different countries, she said, they could hold leverage over the president.

Trump dismissed the NYT report as "fake news" and tweeted that he had paid "many millions of dollars in taxes" but was entitled to depreciation and tax credits and was "extremely under-leveraged" in terms of his debt and assets.

Democrats blasted Trump's alleged tax evasion, but also took aim at the US tax system and the need for reform.

Senator Elizabeth Warren, who ran in the Democratic primary on an anti-corruption message, said the NYT report was about "more than one man's personal tax scams."

"Donald Trump is a liar, a cheater, and a crooked businessman, yes. But he's also taking advantage of a broken, corrupt, and unequal system that's built for people like him to do what he did," Warren tweeted.

"The vast majority of us pay taxes and get on with life. But the richer you are, the more tax lawyers you employ, the more complex you can make your holdings — all of this can, as the piece shows reduce your tax liability to zero," Bernstein said.

While Trump defended himself and White House Press Secretary Kayleigh McEnany described the report as a hit job, no major Republican leaders had addressed the revelations as of Monday.

But Donald Trump Jr. took to broadcaster Fox News, a network that is often sympathetic to the president, to defend his father.

"Of course the New York Times does this, they put out a selective picture of all of these things the day before the debate to try to give someone like Joe Biden an attack line," Donald Trump Jr. said, in reference to Tuesday's first debate between the president and Joe Biden.

DW analyst Peter Rölle-Dahl said the report could hurt the image and brand that Trump has built for himself of a successful businessman and a very skilled deal maker.

"It also confirms a lot of the rumors and the reporting that we actually have been seeing for the past couple of years that he may not have been as successful and wealthy as he claimed," Rölle-Dahl added.

But the revelations are not likely to dent support from his core base. DW Washington correspondent Carolina Chimoy said that while the report would damage any presidential candidate, the US remains a deeply polarized country and neither supporters nor opponents of the president are likely to change sides.

"The reaction of Donald Trump that was saying that this was totally fake news, this is his killing argument always and this is what his supporters believe," Chimoy said.

"He said the IRS is against him, the agency in charge of checking and reporting the federal taxes, that they are conspiring against him and his supporters do believe this," she added.

The pandemic has pushed millions of Americans to vote how citizens abroad always do: early and by mail. President Trump's efforts to discredit the practice has some overseas voters worried if their ballots will count.

The US president has opted for a strategy of polarization in his reelection bid. This time, he attempts to capitalize on the — often violent — protests against police brutality by prioritizing law and order.