How foul air in India is putting people's lives in danger 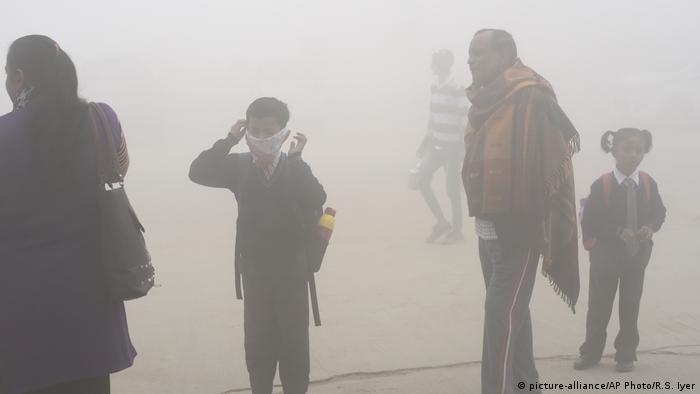 At least one in eight people died of pollution-related causes in India in 2017, a group of Indian medical research bodies have said in a recent report. The research was undertaken as part of a joint project of the Indian Council of Medical Research (ICMR), the Public Health Foundation of India (PHFI), the Institute for Health Metrics and Evaluation (IHME) and the Ministry of Health and Family Welfare, and was funded by the Bill and Melinda Gates Foundation.

The research, entitled "The impact of air pollution on deaths, disease burden and life expectancy across the states of India: The Global Burden of Disease Study 2017," corroborates the fact that air pollution has reached disastrous levels in the country.

The northern states, including Delhi, Punjab and Haryana, are affected worse than regions in the south.

Experts calibrated nearly 369 ground-level monitoring stations and satellite-based aerosol optical depth data to measure outdoor air pollution. The findings of the research, which was also published in the journal Lancet Planetary Health, said 1.2 million people died due to contaminated air in 2017, accounting for 12.5 percent of total deaths in the country. Half of the victims were below 70 years of age.

Without the harmful effects of air pollution, average life expectancy would have increased by at least 1.7 years, the experts argued. In the case of non-communicable diseases, including chronic obstructive pulmonary disease, ischemic heart disease, stroke, diabetes, lung cancer, diabetes and cataract, the number of years lost to ill health was almost as much as the rate attributable to tobacco use, the study said.

The startling results have alarmed both environmentalists and experts, who feel that this evidence should spur leaders to act urgently and reduce health risks to all, particularly children, the elderly and the poor.

Anumita Roychowdhury of the Centre for Science and Environment said that steps needed to be taken urgently to fix the issue. "The scale of the problem is critical and we need to move on a war footing, otherwise we will lose more people in the coming years," she told DW.

While air pollution is a major planetary health risk and many developing countries are suffering from its effects, India's pollution levels have been consistently terrible for the last few years.

According to the researchers, the main reasons for air pollution were coal burning for thermal power production, industry emissions, construction, brick kilns, transport vehicles, residential and commercial biomass burning, agricultural stubble burning and the use of diesel generators.

In addition to the above reasons, winter months bring more problems with them, especially in the capital New Delhi, where a drop in temperatures and wind speeds results in more pollutants being trapped in the atmosphere, causing a haze. Farmers in agrarian areas around Delhi burn more than 23 million tons of crop stubble every year, further contributing to the dense winter smog.

Siddharth Singh, energy expert and author of "The Great Smog of India," says that during this period, breathing in the city air is like smoking a pack of cigarettes a day. "The crisis is so grave that it warrants emergency health advisories forbidding people from stepping out. And yet, for most of us, life is business as usual. It kills people silently," he noted.

A 'road map' to curb pollution

Both the federal and local governments have done little despite warning signals for several years that Indian cities were exposed to alarming pollution levels that breached the safe limit set by the National Ambient Air Quality Standard (NAAQS).

In many cases, pollution levels were four times the maximum permissible limit recommended by the World Health Organization (WHO). No Indian state achieves pollution levels at or below the WHO's limits, the study revealed.

"These findings will serve as a useful guide for making further progress in reducing the adverse impact of air pollution in the country," Balram Bhargava, director of the Indian Council of Medical Research (ICMR) told DW, adding that India needed to act quickly.

New Delhi is still struggling to create a coordinated and well-thought-out national approach to reduce pollution. Several metropolitan cities have initiated some pollution control action in recent years, but there has been little or no political will to enforce anti-pollution laws.

Experts feel that NAAQS must be legally binding in all regions and that the national air quality planning and city action plans need a roadmap for chalking out measures to curb pollution. At the very least, officials should launch a public information system which informs people of the quality of air on a daily basis. Furthermore, health advisories and smog alerts need to be sent out so people can be prepared in case of pollution emergencies.

According to Lalit Dandona, a scientist at the Public Health Foundation of India (PHFI), "This [pollution] is going to have a massive impact on public health. The government's policies on pollution will have to be put to the test and it is in everyone's interest that we have good and clean air."

Air pollution in the Indian capital has hit hazardous levels after a night of revelry to celebrate the festival of Diwali. Despite a ruling to limit the use of firecrackers, most celebrations went ahead as normal. (08.11.2018)

Not many topics galvanize public opinion in Bengaluru as much as worsening traffic and growing pollution. The city's largest water body often draws the spotlight whenever environmental issues emerge in public platforms. (31.01.2018)