Bellandur Lake - a frequently burning waterbody in India′s Silicon Valley | Asia | An in-depth look at news from across the continent | DW | 31.01.2018

Not many topics galvanize public opinion in Bengaluru as much as worsening traffic and growing pollution. The city's largest water body often draws the spotlight whenever environmental issues emerge in public platforms. 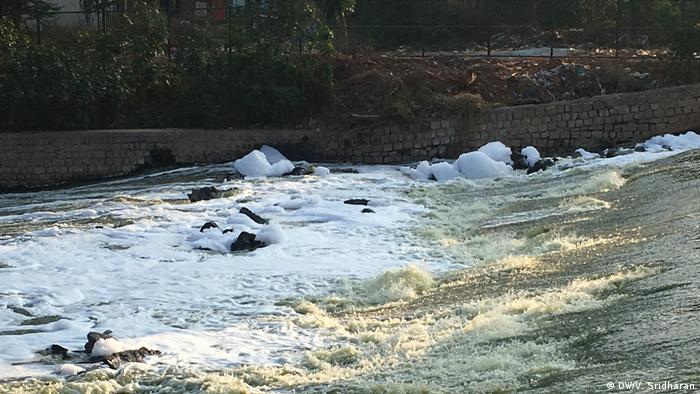 Toxic foam seen from one of the outlets of Bellandur Lake

The southern Indian city of Bengaluru, formerly Bangalore, was once known as the garden city and for its lush green cover. But the city, often touted as India's tech capital and Silicon Valley, metamorphosed into a concrete jungle over the past couple of decades leaving the green habitats to either stink or shrink.

Spread over 900 acres in southeastern Bengaluru and nestled in premier military facilities, Bellandur Lake should be a case in point for rising pollution levels in the city.

Once a seasonal home for tens of thousands of migratory birds from Siberia and other parts of Central Asia, and served as a livelihood for scores of villages in the vicinity, Bellandur Lake now bears the brunt of rapid urbanization of Bengaluru.

Recently, a major fire broke out on the surface of the lake - one of the 70 surviving waterbodies from the 272 of 40 years ago - in a third such instance of a blaze over the past several years, sending an alarm bell to ecologists and authorities.

In an unprecedented move, more than 5,000 troops and firefighters were drafted in to douse the blaze, which raged for several hours on January 19. The fire destroyed up to 40 acres of the lake's bed. The cause of the fire has been identified by "human intervention either intentional or otherwise" to burn dry grasses floating on the water.

Rakesh Singh, principal secretary to the Karnataka government and commissioner of the Bangalore Development Authority (BDA), the agency responsible for the city's infrastructure, told DW that firefighters managed to put out the fire using the lake water itself, indicating the water was not readily ignitable.

The BDA, a cash-starved regulator, took custody of Bellandur Lake in 2017 from the Lake Conservation and Development Authority as part of the rejuvenation efforts to improve the lake's conditions.

In the BDA's latest findings, which Singh shared with DW, it's stated that the "dense smoke spread to other parts of [the] lake due to winds, but this did not have any pungent or toxic smell." This suggests either organic waste or peat caused the fire, said Singh.

The report added that the presence of methane gas was only minimal in the air samples collected from various places nearby the lake, ruling out the possibility of methane being the cause. Nonetheless, the specifics of the findings are disputed given the lake's drastic contamination.

The lake constantly spews waves of toxic foam, which occasionally spills onto roads affecting commute and residences in the neighborhood. Through the five inlets to the lake, three large and two small, there was an inflow of 500 million liters of untreated sewage, both industrial effluents and domestic waste, entering into Bellandur Lake, according to a study in 2017. However, this has been cracked down with the government introducing hefty fines for violators.

"Issues such as a major fire or toxic foam or an unbearable stench have become a common phenomenon in this area. When these occurred for the first time in 2015 and 2016, they were huge spectacles," said Manjunatha, a local shopkeeper in the area. "But nowadays these appear to have become a new ‘normal' in our area, even though Bellandur Lake issue attracts media and government's attention. The new normal is a major cause of worry for the entire neighborhood." 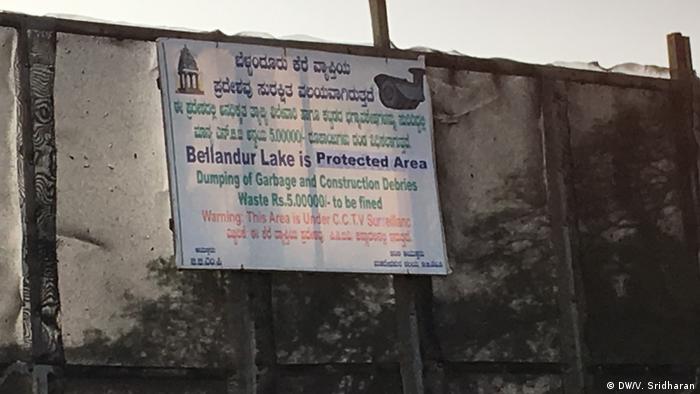 The lake's pollution is notorious enough to force inhabitants in the nearby areas to form close to a dozen loosely aligned civic groups and non-government organizations to deal with authorities.

Pollution levels at Bellandur Lake, one of the two worst polluted waterbodies of Bengaluru along with Varthur Lake, are deplorable, say scientists and environmentalists calling for immediate action.

More strict measures are necessary just like the latest order from the National Green Tribunal, an autonomous judicial body which handles India's environmental matters, asking nearly 100 apartments in the catchment area to set up their own sewage treatment plants, say activists.

"Immediate action plan, the government is definitely doing that. It is planning to set up a massive water treatment plant and it will get completed by this year," Priyanka Jamwal, a scientist with a local research institution which deals with conservation of biodiversity, told the DW. But initiatives which are both scientific and transparent need to be introduced to tackle the pollution in a longer run, said Jamwal.

Incidentally, Jamwal's team had collected water samples from Bellandur Lake just on the day before the fire broke out and found the impurity levels are way higher than the ones prescribed by regulatory bodies such as the National Pollution Control Board.

As a long-term measure, Jamwal has suggested the regulators and government should first come up with comprehensible and enforceable regulations on what they exactly mean by guidelines for "clean lake," by prescribing the levels of nutrients such as nitrate and phosphate. Only this would help in how domestic and industrial sewage should be treated, she said. 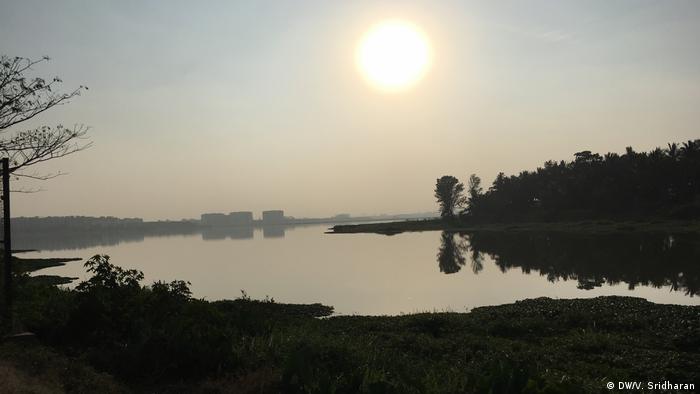 Bellandur Lake is Bengaluru's largest and one of the most polluted

Despite numerous campaigns and popular slogans over the years, the fondness for sons remains strong among Indian parents. Many of them continue to see boys as an investment and girls a liability. Murali Krishnan reports. (31.01.2018)