Despite numerous campaigns and popular slogans over the years, the fondness for sons remains strong among Indian parents. Many of them continue to see boys as an investment and girls a liability. Murali Krishnan reports. 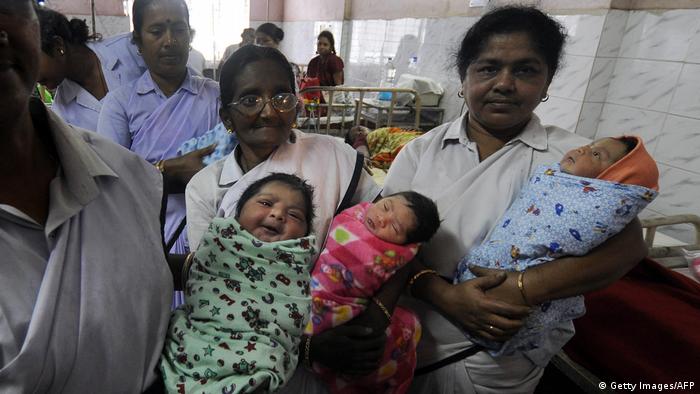 The preference for male children among Indian families has resulted in about 63 million women statistically "missing" from the country's population, revealed a government report presented to parliament this week. Analyzing birth rates and the gender of last-born children, the report states that over 2 million go "missing" across age groups every year because of abortion of female fetuses, disease, neglect and inadequate nutrition.

This obsession with sons has led Indians to resort to female feticide on a massive scale. They also provide better nutrition and medical care for boys than girls, and indulge in a host of other practices that discriminate against girls. Even in this day and age, families openly celebrate the birth of a son, while the birth of a daughter is not always greeted in the same manner.

India's skewed sex ratio is a consequence of this discrimination. The last population census conducted in 2011 highlighted its abysmal record on this front, with the country having only 943 females per 1,000 males. Child sex ratio, which shows the number of girls per 1,000 boys between the ages 0-6, fared even worse, with just 918 girls per every 1,000 boys in this demographic group.

The latest government report demonstrates that the practice of sex-selective abortions continues to persist, in spite of the stringent laws put in place to counter it. "We know that the sex ratio in India is highly skewed," said the government's chief economic adviser Arvind Subramanian. "The issue is a matter for Indian society as a whole to reflect upon," the report grimly warned.

Girls are unwanted, males only?

A plethora of social, cultural and economic factors contribute to this trend. A boy is widely viewed as an asset; a future breadwinner and caregiver who will look after his parents when they become old. A girl, on the other hand, is seen as a liability, as parents are often pressured to pay dowries when their daughters marry.

Also, in India's patriarchal society, it is considered the "pious obligation" of a "son" to take care of his parents, but no such expectation is placed upon daughters. After marriage, a daughter is usually regarded as part of her husband's household and is generally expected to take care of her in-laws, but not her parents.

"The economics here is pretty straightforward. It's the culture that's to be blamed. The system as it stands today rewards the birth of a son, while penalizing the birth of a daughter," S. Rajan, a demographic expert, told DW.

There is a popular perception that this preference for boys is more prevalent among illiterate, working-class people in rural areas. But this belief is not entirely accurate, as the phenomenon of distorted sex ratios can be observed even among educated and wealthy Indians in the country's metropolises like Delhi and Mumbai.

Road ahead is bleak

Sociologists, rights activists and child rights groups who have studied the issue closely over the years blame the wrong social messaging, political attitudes and the poor implementation of laws for the problem to continue unabated.

"Successive governments from the early 1990s have been warned by the Registrar General of Census that this phenomena of missing or eliminated girls is happening and what started as an urban phenomena with people having access to sex-selection technology had by 2011 penetrated into rural areas," Akhila Sivadas, executive director for the Centre for Advocacy and Research, told DW.

Sivadas believes it's imperative for the government to stringently implement the laws to prevent the misuse of prenatal diagnostic technology for the purpose of sex-selective abortions.

"The law has provisions to regulate the practice, and failing that to prosecute the offender, seal the clinic, confiscate the ultrasound machines, file a legal case, create public awareness and partner with civil society organizations in ensuring constant vigil and prevention of unethical practices," Sivadas told DW.

Other activists like Kavita Krishnan of the All India Womens' Progressive Association say the government's campaigns smack of "sexism" and "patriarchy."

"States like Haryana which fete themselves on politically-inspired slogans like 'Beti Bacchao, Beti Padhao' (save the daughter, educate the daughter) need to think twice, especially when the girl is covered in a veil. Is that not a sign of subjugation and oppression?" Krishnan said.

"Preference for males will exist in India. Indeed, a district level index that we are doing shows that the adolescent sex ratio has fallen. Although attention is being paid to the skewed sex ratio in the 0-6 age group, where are the adolescents disappearing?" Enakshi Ganguly Thukral, the founder of HAQ Centre for Child Rights, an NGO, told DW.

"Unless there is strong political will, backed by implementation of the policies on the ground, we will continue to see such violence against girls and women," says social activist Shabnam Hashmi.

There is more bad news on the horizon. Data based on World Bank projections suggest that the sex ratio has been deteriorating in the past few years and is likely to decline further by the year 2031. It is projected to drop further to 904 by 2021 and 898 by 2031.

Against this backdrop, it seems an uphill task for reform-minded politicians and activists in India to bring about a change in mindset and social values that are desperately needed to tackle the problem of "missing" girls and women in India.

The Supreme Court's ruling that having sexual intercourse with a wife aged under 18 is rape marks a big step forward in the fight against child marriage and sexual abuse of minors. But many worry about its enforcement. (13.10.2017)

A list of alleged sexual predators, comprising mainly professors from Indian universities, was recently posted and spread virally on social media, once again shining a spotlight on the issue of sex crimes in India. (08.11.2017)