Why implementing child bride verdict is a challenge in India | Asia | An in-depth look at news from across the continent | DW | 13.10.2017

The Supreme Court's ruling that having sexual intercourse with a wife aged under 18 is rape marks a big step forward in the fight against child marriage and sexual abuse of minors. But many worry about its enforcement. 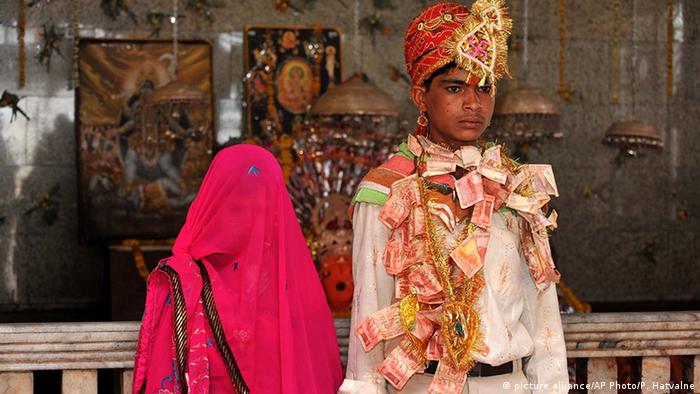 Overturning an outdated law, India's Supreme Court ruled this week that sexual intercourse by a man with his minor wife, aged below 18, with or without her consent, amounts to rape. Any husband convicted of committing such an act can face up to 10 years of imprisonment or even a life term.

The verdict is seen by many here as timely and significant. The Indian government had until now allowed an exception in the penal code that permitted a man to have sex with his wife if she is aged between 15 and 18. And authorities had urged the court not to tinker with the exception clause as it was introduced keeping in view the age-old tradition and evolving social norms.

In short, the government opposed criminalizing the custom, arguing it would damage the institution of marriage, but the judges struck down the section stating the practice of child marriage had to go.

The landmark ruling drew applause from activists and NGOs campaigning against child abuse and for gender rights. They point out that the legal loophole had been routinely exploited to traffic minor girls into sexual slavery both within and outside India.

"The verdict is a vindication of the demand being raised by child rights activists. The challenge of its effective implementation remains. We hope it revamps strategies to prevent and prohibit child marriage," Maya John of the Center for Struggling Women (CSW), a women's rights organization, told DW.

Doubts remain over how authorities will implement the ruling, though, given the large number of child marriages taking place in the South Asian country every year. Along with Niger, Guinea, South Sudan, Chad and Burkina Faso, India is one of the few countries worldwide where child marriage continues to be widely accepted - socially and legally.

Poverty, weak law enforcement, patriarchal norms and concern about family honor are factors contributing to early marriage. Despite reports suggesting that child marriage is on the decline in the country since 2001, the latest census report of 2011 reveals that child marriage is rampant, with almost one in every three married women being below 18 years. The problem is particularly acute in rural areas, where two-thirds of the Indian population lives.

Minor girls getting married off by their parents in mass wedding ceremonies is also a relatively common occurrence. For instance, Akshaya Tritiya or Akha Teej, an annual spring time festival, witnesses a large number of child marriages - even mass marriages - that are solemnized.

India has 70 districts that report a "high incidence" of underage marriages spread across 13 states, which account for 21 percent of the country's child marriages, according to IndiaSpend, the country's first data journalism initiative.

There is gender discrimination inherent in child marriage, as the practice is more prevalent among girls than among boys. It also violates child rights - cutting across every part of women's development and creating a vicious cycle of malnutrition, poor health and ignorance, experts say.

Though the government enacted the Prohibition of Child Marriage Act in 2006 to prevent child marriages, as opposed to only restraining them, the reality on the ground is completely different. According to the National Commission for Protection of Child Rights (NCPCR), India's highest child rights body, underage marriages, especially of girls, are rising even in urban places in India.

Against this backdrop of social acceptance of this tradition, it is unclear how committed Indian authorities will be in enforcing the court's verdict.

"In a situation where child marriage has social approval, who is going to help the girl complain against her husband? No one, not even her close family, will help," lawyer Sudha Ramalingam, from the southern city of Chennai, who has been involved in rescuing many girls from early marriage, told Reuters.

"Child marriage is a social evil, and it is forced and perpetuated by adults. They are the ones who must be penalized. Not children. Unfortunately, simply criminalizing sexual activity among young people does just that," argues Bharti Ali, a child rights activist.

Others also criticize the fact that the ruling focused on criminalizing young boys while ignoring the role played by the parents of the boy and the girl in arranging a child marriage as well as the clerics who perform them. Another issue that observers view with concern is that the verdict could be used as a tool to harass young people aged 15 to 18 who have consensual sexual contact.

Enakshi Ganguly, founder of HAQ, a rights group focused on child welfare, believes the law had the potential of putting a whole lot of youngsters in the criminal justice system. "Far too many young people are getting caught in the criminal justice system for having had consensual sex. And with minimum sentencing, there is no escape for the boys and young men from incarceration," Ganguly told DW.

She is also worried that doctors would refuse to offer medical services to girls who are in such relationships, as they might be afraid of facing litigation.

The court's judgment has come as a shot in the arm for lawyers arguing in favor of making marital rape a crime in the conservative nation. Marital rape is currently not a crime in India, but the Delhi High Court is currently hearing a clutch of petitions over the issue. Prime Minister Narendra Modi's government has argued that criminalizing marital rape could destabilize the institution of marriage and make husbands vulnerable to harassment by their wives.