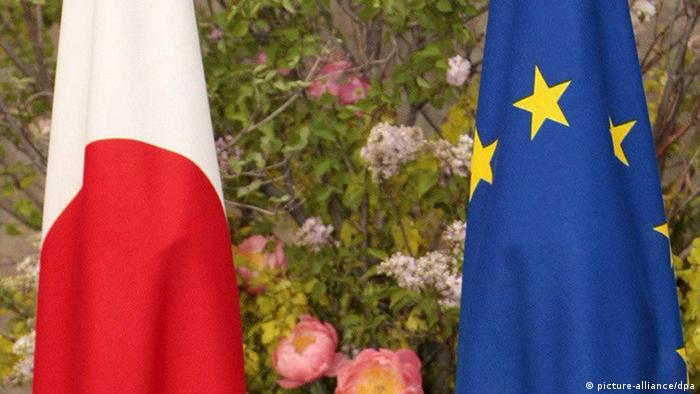 Japan and Europe are both democracies which not only share common values and interests, but also cooperate closely in international fora such as the United Nations, the World Trade Organization, the G7 and G20. They are also accelerating negotiations for a strategic partnership agreement and a free trade deal which together promise to take their bilateral relationship to a new level.

Moreover, there are a number of economic fields where Brussels and Tokyo share interests and are keen to learn from each or at least exchange views and experiences such as fiscal policy, climate change, renewable energy, agricultural reforms and demographic change, as Professor Franz Waldenberger, an expert on Japanese economy at the Tokyo-based German Institute on Japanese Studies, told DW.

Yet despite the long-standing, solid relationship, there is a perception among European government officials, academics, the media and think-tanks that there is a lack of significant international cooperation between Europe and Japan, found a recent survey conducted by the European Council on Foreign Relations (ECFR) and the Foreign Ministry in Tokyo on Japan's image across Europe.

"The perception is that Japan is still punching below its weight in international politics," wrote Mathieu Duchâtel, deputy director of ECFR's Asia and China Program, in a commentary referring to the results of the audit, which was conducted in Austria, France, Germany, Italy, Poland, Portugal, Spain, Sweden and the United Kingdom. 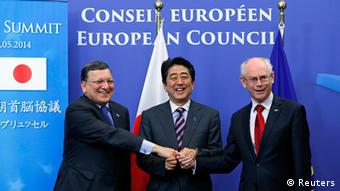 'The perception is that Japan is still punching below its weight in international politics,' wrote ECFR's Mathieu Duchâtel

The survey found that Japan - the world's third-largest economy - is overwhelmingly perceived as a trustworthy partner - a defining feature of Japan's image across European capitals. "This reliability comes with a reputation of high predictability and the perception that Japan, as a status quo power, is a stabilizing factor in the international order," wrote Duchâtel.

The Asia expert states that such a strong basis of mutual trust explains why despite occasional negative media coverage, the ongoing reforms of Japan's military policy are widely understood in Europe as a process of normalization. And that it may also be the basis for the ongoing expansion of Japan's military ties with the UK and France.

"Europeans tend to see the new national security posture of Japanese PM Shinzo Abe as a rational adaptation to a changing balance of military power in Asia. Clearly, Chinese public diplomacy efforts to depict the ongoing reforms as creeping right-wing remilitarization have not been successful in Europe," Duchâtel added.

"Sushi chains are now a standard feature of the urban landscape, anime and cosplay are a well-recognized part of the youth subculture scene. Since the arrival of economic stagnation nearly 25 years ago, the more vituperative characterizations of the country have abated, and even the negative stereotypes about Japanese tourists have been replaced by ones about Chinese," Surak, a Japan expert at the Institute for Advanced Study in Princeton, told DW. 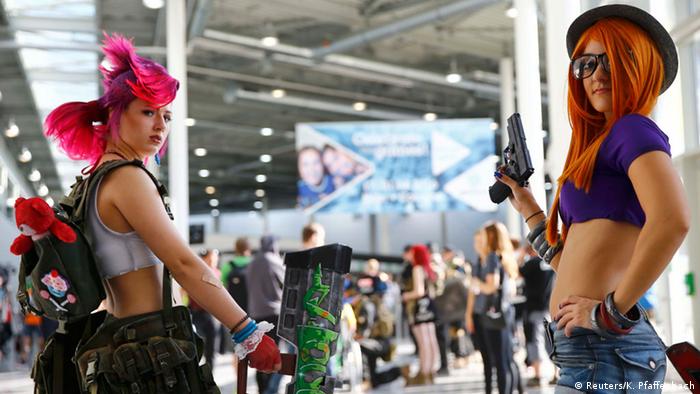 Yet despite the cultural symbols and Europe's strategic trust in Japan, the ECFR audit also finds a scarceness of Japanese soft power in Europe. "Japan's cultural power does not shape the foreign policy preferences of European states, it does not provide a particularly relevant context for the conduct of Europe-Japan relations, and it has no measurable impact in terms of the capacity of Japanese diplomacy to gain support from Europe on specific issues," says Duchâtel.

'China gets all the media attention'

A key factor behind this paradox, the ECFR expert argues, is the rise of China due to a "China-centric vision of Asia" across European capitals tends to push Japan out of the foreign policy debate. "For one thing, China gets all the media attention, which in a way, is a blessing in disguise as Chinese diplomats notoriously complain about the negative coverage their country gets in Europe," says Duchâtel.

But for Japan, he adds, this means less visibility - only a handful of European media outlets maintain a full-time correspondent in Tokyo, while all major media have a full-time presence in Beijing, from which they sometimes cover Northeast Asia or even the whole of East Asia.

Japan expert Surak agrees: "It's easy, from a position in Europe, to lose sight of the differences within Asia when they are so far away. The media devotes precious little attention to this crucial part of the world and the dynamics within it."

According to ECFR, Japan seems to lack its own profile and is seen in Europe as a country that seeks to avoid contentious issues. Therefore, even though the country remains a strong partner of the United States, it doesn't appear to German survey respondents, for instance, as a big international player.

Robots instead of human nurses? Most Germans won't like the idea, but in Japan it's already becoming reality. Researchers in both countries are trying to reduce the fear of robots and make them acceptable to people. (02.12.2015)

The Chinese yuan, also known as the renminbi, has joined the IMF’s reserve-currency basket. This will add value to the currency but also brings obligations for Beijing, says DW’s Frank Sieren. (02.12.2015)

'Pushed off the radar'

A similar view is held by the Austrians. For instance, in terms of the economy, there was a mixed picture, with some Austrian respondents saying that Japan has lost much of its image as a powerful economic player due to its slow growth and the rise of other markets in the region, most notably China, whose strong presence has "pushed" Japan off the radar of Austrian media and public.

James D. J. Brown, a Japan expert at Temple University's campus in Tokyo shares this view, arguing that the main problem is the state of the Japanese economy. He points out that with economic growth barreling along at five percent-a-year or above, Japan would find no difficulty in attracting and maintaining the attention of European decision-makers.

"The reality, however, is a stagnant Japanese economy that is constantly flirting with recession, as well as a rapidly aging and shrinking population. As long as such trends continue, Japan will struggle to command a prominent place in the minds of European business leaders and politicians," says Brown. Japan is the EU's seventh-largest trade partner, with bilateral trade amounting to $118 billion (108 billion euro) last year.

As a result, European-Japanese ties have become less important, and attention that would previously have gone to Tokyo is now being directed towards Beijing, the analyst added.

Indeed, there has been some shock within Japan concerning the new enthusiasm with which many European governments are using to court the Chinese. This was most visible in the case of the Asian Infrastructure Investment Bank (AIIB), the Chinese-led international financial institution that was formally launched this year.

"Despite being shunned by the United States and Japan, European countries were unrestrained in their eagerness to join this bank as founding members," Brown pointed out. That this is the case suggests that soft power is actually not that important. "While Japan is viewed much more favorably than China within Europe, China commands much more influence simply on the basis of its larger and more dynamic economy," he stated. 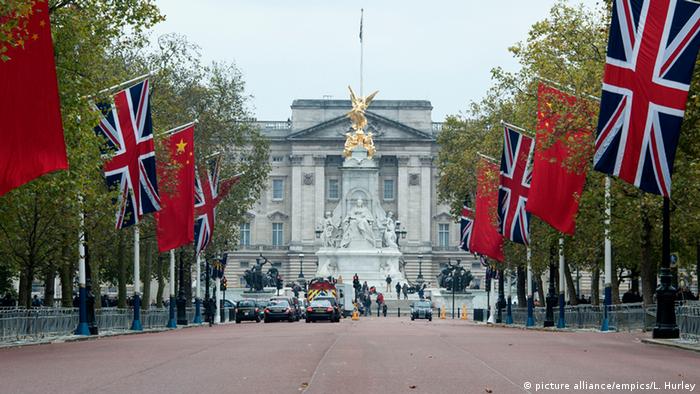 Just two decades ago, China and the EU traded almost nothing. But commercial ties have increased dramatically in recent years, with China becoming the European Union's biggest source of imports by far, as well as one of the EU's fastest growing export markets. China is now the EU's second-largest trading partner behind the United States and the EU is China's biggest trading partner. Bilateral trade amounted to $508 billion (464 billion euro) last year.

Most notable in this regard, is the United Kingdom, whose China policy has seemingly changed dramatically in recent years. Analyst Brown indicates that in 2012, Prime Minister David Cameron held an official meeting with the Dalai Lama, despite knowing that this would anger Beijing.

"In contrast, three years later, the UK has positioned itself as the most pro-Chinese of European countries and Chancellor George Osborne is a vocal champion of closer economic ties with Beijing, even if this entails toning down criticism of China's human rights record," said Brown.

ECFR quotes UK survey participants as agreeing that Japan's soft power does not necessarily translate into increased global political influence. "The reasons for this are unclear, but may stem from Japan's traditional reluctance to take a leading role in global politics, and therefore less directly related to soft power itself," the think tank stated.

Moreover, UK participants in the audit say the Chinese presence in their country is "incredibly pervasive," with people throughout Europe already believing China to be the richest world economy.

Similar views were expressed in Portugal, where officials interviewed by ECFR were reportedly unanimous in saying Japan is not as important as it used to be, and that there are countries in the Asia-Pacific region that are currently more exciting to Portugal - namely India and China. 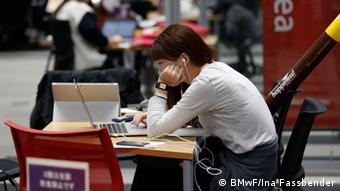 So what can Japan do to improve its image? Experts argue that one small but important step Japan could take would be to encourage more young Japanese to study abroad at European universities.

"In general, due to the structure of Japanese higher education, all too few Japanese students spend time abroad during their undergraduate studies. Were this to change and more young Japanese were to spend time in European countries, they would return with language skills and be able to assist with the internationalization of Japan," says Brown.

And yet Brown points out that, even with the assistance of such steps, unless something fundamental can be done to reverse Japan's chronic economic and demographic problems, in the longer term, "it is inevitable that Japan will become less important to European countries."