Hong Kong media succumbing to Chinese pressure | Asia | An in-depth look at news from across the continent | DW | 11.10.2019

Reporting has become increasingly difficult in Hong Kong since pro-democracy protests erupted in the city four months ago. Many media organizations with ties to China are actively self-censoring. William Yang reports. 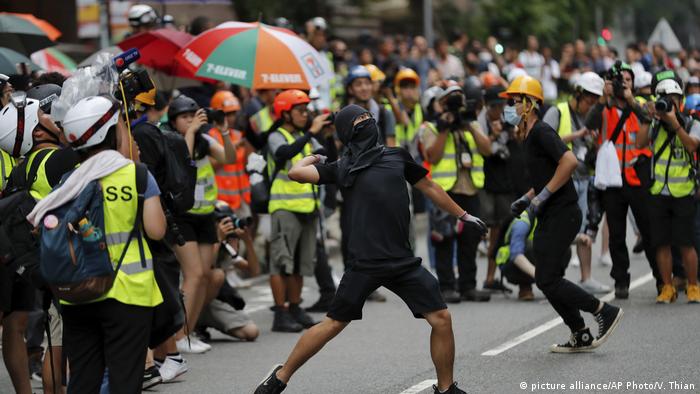 The Hong Kong Journalists Association (HKJA) has warned that press freedom in the city is shrinking, and the threats against journalists have increased in the past months.

According to a HKJA report in July, the violence against journalists, self-censorship and visa restrictions are the main factors behind a deteriorating condition of press freedom in Hong Kong.

Protests in Hong Kong have been ongoing for four months, with protesters initially fighting for the removal of a controversial extradition bill and then for broader democratic rights in the Chinese special administrative region.

Beijing is yet to intervene directly in the protests, but Hong Kong Chief Executive Carrie Lam recently refused to rule out the possibility of Chinese military intervention.

Independent reporting has become increasingly difficult in Hong Kong. Journalists are not only being intimidated and physically targeted, they are also forced to censor their stories. At the same time, self-censorship is also on the rise in the city, say analysts.

Cheng, a journalist who works for a local news website, says that self-censorship has increased since the start of the protests.

"The management of some publications doesn't want their reports to look anti-government. For instance, they tell their staff to change a headline that appears to be sympathetic to the protest movement," Cheng told DW.

As many media organizations have business links with mainland China, they tend to succumb to Beijing's pressure, Cheng added.

Cheng says this self-censorship is dissuading readers, who are losing trust in Hong Kong's media. "The distrust makes it harder for journalists to report from the scene. They could also face a backlash from the public," she said.

In the line of fire

For independent journalists, the situation has been dire.

"Before the start of anti-extradition bill protests, the interference with media coverage was quite invisible; now it has become tangible," Shirley Yam, the HKJA vice chairperson, told DW.

"Now we also have a law that allows interference with journalistic work," Yam added.

On October 4, the Hong Kong government introduced emergency measures, including an anti-mask law. Yam says that journalists need masks to protect themselves from teargas while reporting.

The difficult circumstances have forced some news organizations to pull back journalists from the frontline. On October 1, Radio Television Hong Kong's (RTHK) English news and current affairs unit decided to recall its reporters from the streets after two of its journalists were injured in two separate incidents.

"The decision was made because we can't risk having more journalists injured, and we think it is necessary to ensure everyone's safety," Damon Pang, a RTHK journalist, told DW.

The HKJA paints a gloomy picture for press freedom in Hong Kong in its annual report.

Journalist Cheng fears the government will suppress more civil liberties in the coming weeks and months.

"I think that press freedom in Hong Kong will only deteriorate," Cheng said.

"The protests are far from over and the authorities will put more curbs on civic freedom, including the freedom of expression and the freedom to information," she added.

But HKJA's Yam says the Hong Kong journalists will do whatever it takes to uphold press freedom.