Hong Kong activist Joshua Wong told DW that defying "the greatest human rights abuser is essential" ahead of his trial next week. He faces up to five years in prison for his role in pro-democracy protests. 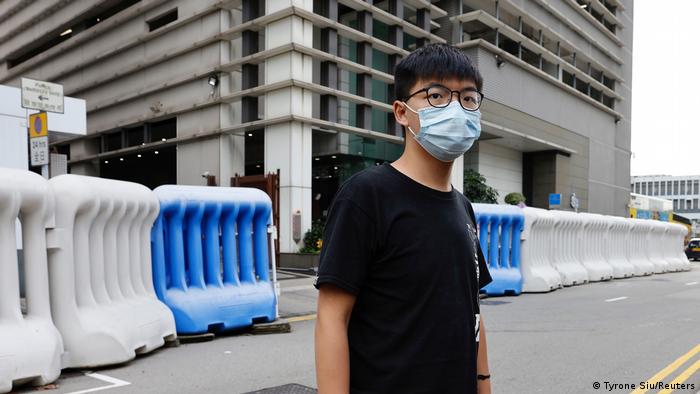 Wong rose to prominence during the pro-democracy demonstrations that were triggered by the introduction of the Fugitive Offenders amendment bill by the Hong Kong government. The now-aborted legislation would have potentially meant the extradition of Hong Kong citizens to mainland China, where Wong and other activists felt residents would be subjected to Beijing's stricter approach to civil liberties.

Wong, whose trial starts on Monday, remained defiant, despite the threat of a lengthy jail term. "Prison bars have never stopped me from activism and thinking critically. Even though more than 10,000 Hong Kongers have been arrested since last summer and 2,000 people — including me — were prosecuted, it's still important for us to stay and fight."

Wong not expecting a fair trial

But Wong has little confidence in the judicial process ahead. "Courts in Hong Kong are being interfered with by the Beijing authorities, and the rule of law in Hong Kong exists in name only."

Police arrested Wong on September 24 for participating in an unauthorized assembly in October 2019, as well as for violating the city’s anti-mask law by covering his face during the protests.

That arrest added to several unlawful assembly charges, or suspected offenses he and other activists have been accused of related to last year’s protests.

Despite the pressure, Wong showed no signs of easing up as he said: "No matter what happens, to defy the greatest human rights abuser is essential to restore democracy for our generation and the generation following us."

Wong hopes others will keep a watchful eye on developments in Hong Kong should he go to prison.

"I only wish that during my absence, people around the world can continue to stand with the people of Hong Kong by following closely the developments, whether it's the canceled election, the large-scale arrests under the national security law and the 12 activists being detained in China."

At the beginning of last month, China formally approved the arrests of 12 Hong Kong activists caught last month while allegedly trying to flee the former British colony for Taiwan.

The ex-lawmakers say they were arrested for bringing a rotting plant and pungent liquid into a legislative session in May. The actions were a protest against a law that criminalizes criticism of China’s national anthem