The ex-lawmakers say they were arrested for bringing a rotting plant and pungent liquid into a legislative session in May. The actions were a protest against a law that criminalizes criticism of China’s national anthem 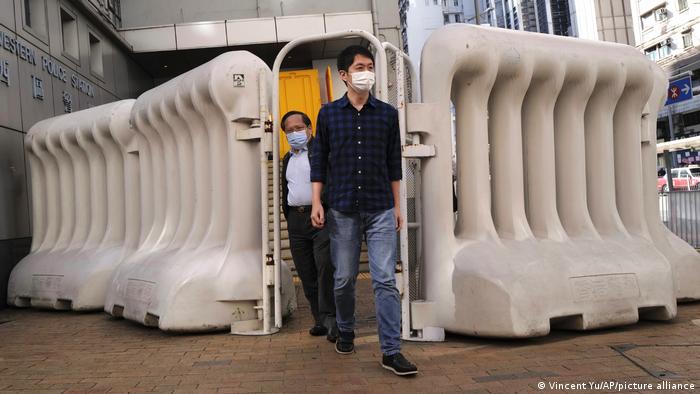 Three former Hong Kong lawmakers said they were arrested on Wednesday for previous attempts to disrupt debate of pro-Beijing bills in the legislature.

Chu Hoi-dick, Ray Chan and Ted Hui said in separate Facebook posts that their detention was in connection with incidents that took place in May.

It was the latest in a string of arrests that have been carried out in recent months. Earlier this month, seven pro-democracy lawmakers, including Chu and Chan, were arrested over scuffles that broke out at another chaotic legislative meeting on May 8.

Hong Kong police confirmed three Wednesday arrests on charges of contempt in the legislature and intent to cause harm to others, but did not name the lawmakers.

Police later said all three had been released on bail and must now appear at the West Kowloon Court on Thursday.

Chu and Chan quit the legislature in protest after Hong Kong leader Carrie Lam postponed legislative elections that were scheduled for earlier in the year, citing the coronavirus pandemic.

They said the postponement breached the Basic Law, Hong Kong's mini-constitution, which came into effect after the former British colony was returned to China in 1997.

Ted Hui was arrested for rushing to the front of the legislature on May 28, dropping a rotten plant and attempting to kick it at the speaker of the chamber, Andrew Leung. Chu allegedly splashed a bottle of liquid inside the legislature on the same day.

One week later, Chan is accused of hiding a pot of liquid with a strong and unpleasant smell in a paper lantern attempting to approach the front of the chamber with it. He dropped it as he was stopped by security guards.

That same day, Hui is said to have splashed some liquid at the front of the legislature and was escorted out.

The actions were all in protest of the six-part National Anthem Law, which criminalizes criticism of China’s national anthem, "March of the Volunteers," and requires citizens to "stand solemnly and deport themselves with dignity" during its playing.

The law came into effect on June 12 despite the opposition protests. Amnesty International called the law, which can carry a 3-year jail term, "an insult to freedom of expression."

Hong Kong's Pro-democracy groups have in recent months accused their government and the central Chinese government in Beijing of tightening control over the semi-autonomous Chinese territory in response to demands for more democracy.

They accuse authorities of destroying the autonomy promised to the city, a global financial center with greater freedoms than mainland China.