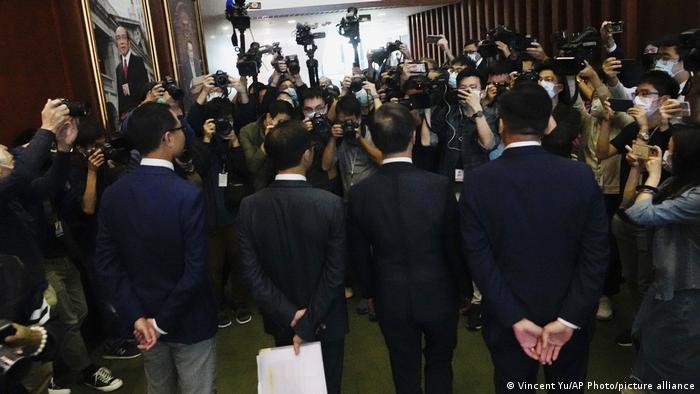 "Today we will resign from our positions, because our partners, our colleagues have been disqualified by the central government's ruthless move,'' Wu Chi-wai, convener of the pro-democracy camp, said at a news conference announcing their resignation.

"Although we are facing a lot of difficulties in the coming future for the fight of democracy, but we will never, never give up," he said.

Wu said they will hand in their resignation letters on Thursday

Which lawmakers were disqualified?

It came immediately after Beijing passed a new bill that allows the government to expel legislators without recourse to the courts.

The city government said the quartet had endangered national security, without offering further details, an accusation Kwok described as "ludicrous" in an interview with DW.

As a result of Wednesday's development, Kwok said the "one country, two systems" legislation introduced in 1997 to guarantee Hong Kong's autonomy was "now gone" along with the constitutional order "because with this law, the chief executive could basically pick off any legislator that she doesn't like. So I think the constitutional order that we originally enjoyed and believed that we had is now gone."

Kwok still felt there was a ray of hope coming from the people of Hong Kong. "We are going through a very, very tough period and we foresee that there will be even more difficult, trying times... But I think I can still feel the passion and the aspiration in the hearts and minds of the Hong Kong people. The aspiration for the rule of law, the freedom that they've been promised. I think that is not going to go away."

Amnesty International decried the new laws, saying it was "yet another example of the Chinese central government’s campaign to silence dissent in the city by any means."

Amnesty International’s Asia-Pacific Regional Director Yamini Mishra said: "Once again, Hong Kong has allowed its laws and its legislature to be bypassed as Beijing makes up the rules as it goes along. Bulldozing through arbitrary decisions via the Chinese government makes a mockery of the rule of law."

Lawmakers can be expelled if they are considered to pose a risk to national security, if they seek the city's independence, if they refuse to accept China’s sovereignty over Hong Kong, or if they seek foreign interference.

The law was passed at the National People's Congress Standing Committee, which convened on Tuesday and Wednesday.

Opposition lawmakers in the 70-seat city legislature had threatened to resign en masse if any pro-democracy legislators were disqualified from the Legislative Council, or Legco.

A teenage former activist leader in Hong Kong has become the first public political figure to be prosecuted under a national security law imposed by Beijing. Tony Chung was trying to seek asylum at the US Consulate.