Seven pro-democratic politicians have been arrested over scuffles that broke out in Hong Kong's legislature earlier this year. It's the latest prosecution targeting Beijing's opponents in the deeply divided city. 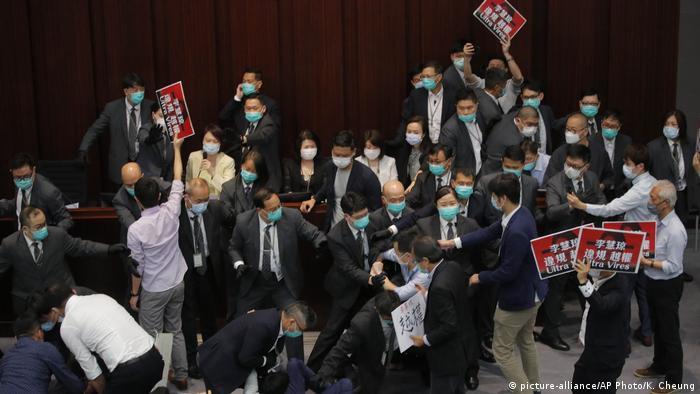 Hong Kong police arrested seven people Sunday over scuffles that broke out in the city's legislature during a faceoff between pro-democracy and pro-Beijing lawmakers earlier this year.

The seven politicians — four of them sitting lawmakers — were arrested on charges of "contempt" and "interfering" with members of the city's Legislative Council in early May, police said.

The statement said the arrests are part of an investigation into a May 8 committee meeting in which pro-democracy lawmakers rushed toward the chairperson's seat and security guards shoved them back. 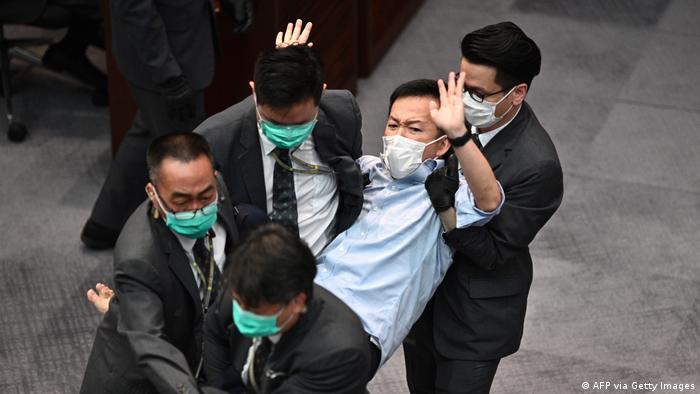 On that day, confrontations broke out in a committee that decides which bills come up for debate.

The opposition had used months of filibustering to stop the appointment of the committee's leader. The pro-Beijing camp responded by forcibly installing one of their politicians to the committee chair.

That prompted angry scenes and protests in the chamber with lawmakers from both sides using placards to protest amid boisterous heckling and physical obstruction.

Security guards and pro-Beijing lawmakers eventually dragged most of the pro-democracy politicians from the chamber and the installation of the committee chair went ahead.

Sunday's police action singled out the pro-democracy politicians for arrest and is the latest in a string of prosecutions launched against critics of Beijing.

The inability of Hong Kongers to elect their leaders and lawmakers has been at the heart of swelling opposition to Beijing's rule.

Hong Kong's legislature passes semi-autonomous laws for the special administrative region but only half of its seats are directly elected, and a complex appointment system ensures the city's pro-Beijing establishment are all but guaranteed a majority.

Public discontent with Beijing's growing influence has contributed to the huge and often violent democracy protests that broke out last year.

In a direct response to the protests, Beijing bypassed the legislature and imposed a sweeping new national security law on Hong Kong in late June.

Beijing says the law has restored stability. Critics say it has delivered a hammer blow to the city's already stuttering civic freedoms.