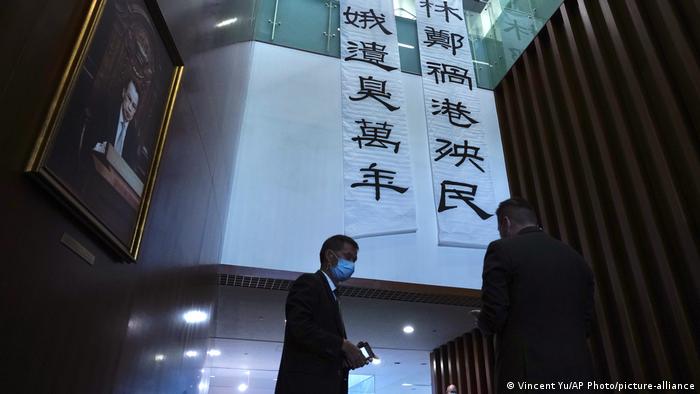 Hong Kong's legislature opened Thursday ahead of the planned mass departure of the pro-democracy opposition following the dismissal of four of their colleagues.

One opposition politician unfurled a banner from a balcony of the legislative council building saying the city's leader Carrie Lam "was corrupting Hong Kong and hurting its people; She will stink for 10,000 years."

"I suppose this is my last protest in Legco," opposition member Lam Cheuk-ting said after suspending the banner from the building's second floor. Chief Executive Carrie Lam was not in the assembly at the time.

Why is the opposition resigning?

The 15 remaining opposition lawmakers then said they would hand in their resignation letters in solidarity on Thursday.

It cleared the way for the government to act against lawmakers seen as endangering national security, supporting Hong Kong independence, or refusing to acknowledge China's sovereignty over the city.

Beijing imposed a controversial national security law in June after months of anti-government protests in the city last year. Critics say the measure seeks to curtail the freedoms China promised Hong Kong could keep after the end of British colonial rule in 1997.

What could this mean for Hong Kong?

The departure of the opposition from the city's legislature has raised concerns about China's expanding control over the former British colony. It would essentially make it possible for Beijing loyalists, who already dominate the chamber, to pass laws favored by China with little opposition.

"This is an actual act by Beijing ... to sound the death knell of Hong Kong's democracy fight because they would think that, from now on, anyone they found to be politically incorrect or unpatriotic or are simply not likable to look at, they could just oust you using any means,'' lawmaker Claudia Mo told reporters.

Hong Kong leader Lam defended the lawmakers' removal, saying that legislators should behave properly. She added that diverse opinions were welcome and stressed that the legislature would not become a rubber-stamp body.

Chinese Foreign Ministry: 'It is a necessary measure'

But the move was widely condemned by the US, Australia and Britain.

A German Foreign Ministry spokesman also said the disqualifications were the latest step of a "deeply worrying" trend which was aimed at undermining pluralism and freedom of expression.

British Foreign Secretary Dominic Raab said Beijing had breached its commitments under a 1984 treaty governing the handover of Hong Kong.

US national security adviser Robert O'Brien said the expulsions showed the Chinese Communist Party had "flagrantly violated its international commitments" and was "expanding one party dictatorship in Hong Kong."