UN special rapporteurs said the law posts a serious risk to fundamental rights, in an open letter to Beijing. They also say the law undermines the right to freedom of expression. 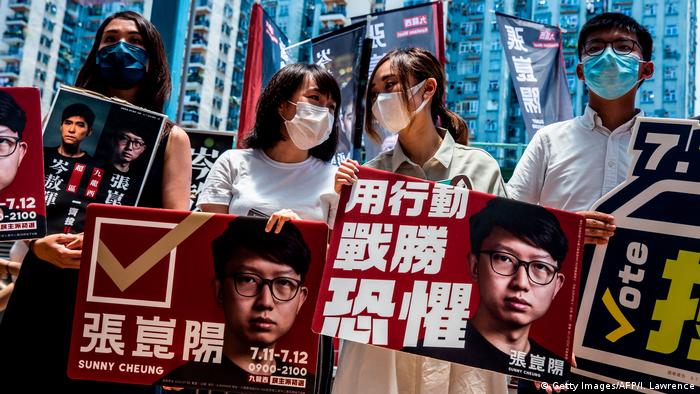 UN special rapporteurs on human rights have told China that its national security law for Hong Kong poses a serious risk to the city's fundamental rights, warning that it could be used to prosecute political activists.

The joint letter, issued on Friday, also said the new law appears to undermine the independence of Hong Kong's judges and lawyers, and the right to freedom of expression.

The law, which criminalizes secession, subversion, terrorism and colluding with foreign forces, has silenced many protesters and activists. Authorities in Beijing and Hong Kong have said the law is necessary to ensure the territory's stability and prosperity.

"The National Security Law poses a serious risk that those fundamental freedoms and due pocess protections may be infringed upon," the letter said, warning that the legislation may "impinge impermissibly on the rights to freedom of opinion, expression and of peaceful assembly."

The UN also called for a fully independent review of the law to make sure that it complies with China's human rights obligations.

The 14-page letter was sent by Fionnuala Ni Aolain, UN special rapporteur on protecting human rights while countering terrorism, and six other UN envoys. The signatories said the law's measures do not conform to China's legal obligations under international law, and voiced concern that the law "lacks precision in key respects, infringes on certain fundamental rights."

The law "should not be used to restrict or limit protected fundamental freedoms, including the rights to opinion, expression and of peaceful assembly."

The letter also said the law could make illegal "many legitimate activities" of rights defenders in Hong Kong. The UN signatories also called on China to explain how it plans to enforce "extra-territorial jurisdiction" so as to ensure It complies with an international treaty on civil and political rights, signed by Beijing.

The letter also warned that the definition of terrorism under the new law was not aligned with he UN Security Council's definition, as China's definition extends to damage of physical property such as transport facilities.

Since the law was imposed, several nations have ended bilateral deals with the global financial hub, including trade privileges with the US, as well as extradition treaties with the US, Britain, Australia and Germany.