Hong Kong authorities are seeking to arrest six pro-democracy activists living abroad, including one US citizen. Experts say that China's security law for the city doesn't just pose a threat to locals. 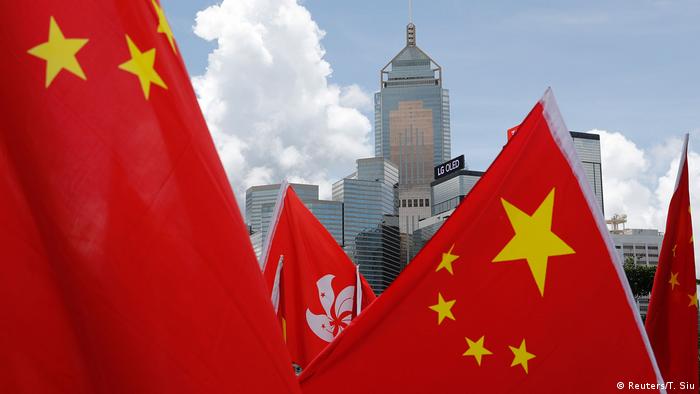 Samuel Chu, a US citizen and the managing director of the Washington-based Hong Kong Democracy Council (HKDC) advocacy group, told DW he was surprised to learn that Hong Kong authorities wanted to arrest him.

Police have issued arrest warrants for six democracy activists living abroad, including five exiled Hong Kong activists and Chu. According to China's state broadcaster CCTV, they are wanted on suspicion of inciting secessionist sentiment and colluding with foreign countries.

"I have been living in the US for 30 years," Chu told DW. "This is definitely an aggressive approach… to go after a US citizen working in the US," Chu added.

It's the first time Hong Kong authorities have targeted activists who are not based in the city.

In Hong Kong, 'the resistance will go on'

Chu's organization has played an important role in several pro-democracy laws targeting Hong Kong that have been passed in the US in the recent months, including the Hong Kong Human Rights and Democracy Act, the PROTECT Hong Kong Act and the Hong Kong Autonomy Act.

"I think we have been targeted because we are an extremely effective force in Washington, D.C.," Chu said.

Ray Wong is another activist wanted by Hong Kong authorities, and he believes the government is sending a message to all Hong Kongers living abroad.

"They don't want us to build contacts with politicians and lobby in foreign countries," Wong told DW. "I'm not afraid of this law [China's new security law — Editor's note] and the fact that the Hong Kong government has put me on the list of wanted individuals. The German government has already granted me asylum and I'm sure it will continue to protect me," he said.

On August 1, a day after China's state-run CCTV reported about the planned arrests, Hong Kong's Chief Executive Carrie Lam warned pro-democracy activists that if they violated the "one country" principle, their future could be bleak.

Last week, US Secretary of State Mike Pompeo criticized the move by Hong Kong police to issue arrest warrants for overseas activists, saying that China is attempting to extend its reach beyond its borders.

"The Chinese Communist Party cannot tolerate the free thinking of its own people, and increasingly is trying to extend its reach outside China's borders," Pompeo said. "The United States and other free nations will continue to protect our peoples from the long arm of Beijing's authoritarianism."

Cui Tiankai, China's ambassador to the US, defended the move against the six activists, saying all measures are being taken according to the national security law. "If anybody violates the law, they'll be punished," Cui said. "It doesn't matter what kind of political views they might have."

Concerns over broad nature of the security law

"What makes the national security law unusual is that Hong Kong is purporting to apply, regulate and prosecute things that individuals do when they are not inside Hong Kong," Julian Ku, a law professor at Hofstra University in the US, told DW. "It's considered very unusual, or potentially a violation of international law, to prosecute non-citizens for things they are doing outside their territories."

Maggie Lewis, an expert in Chinese law at Seton Hall University, told DW that anyone, anywhere can now be subject to criminal prosecution under the national security law. "Since the law came into effect, there have been no efforts to assuage concerns about the broad nature of the law," she said.

According to Ku, there is no difference between an activist living overseas and a Hong Kong citizen under the national security law, adding that the Hong Kong government is damaging the city's international reputation in its efforts to enforce the law.

Even though foreign countries can't really change what's happening in Hong Kong, they should evaluate what changes they can make to ensure that they don't allow city authorities to violate human rights, said Lewis.