A judge sentenced seven men to jail over their "indiscriminate" attack on pro-democracy protesters in Hong Kong two years ago. This was the first conviction over the beatings that refueled protests in the city. 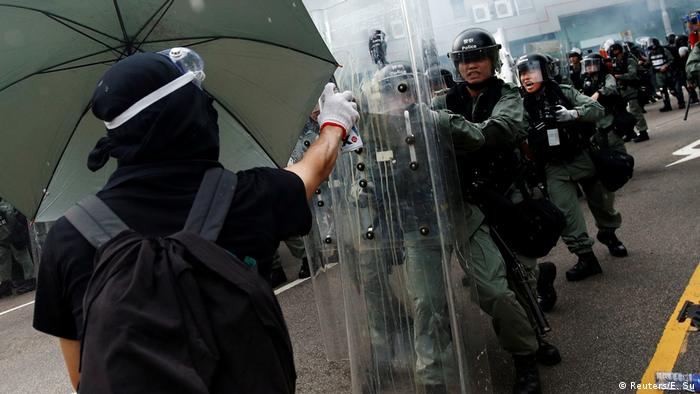 Seven men have been sentenced in Hong Kong for taking part in a mob attack  on protesters who were returning from a pro-democracy rally two years ago, with the judge handing them jail terms varying between three and half and seven years.

The men were found guilty of rioting as well as wounding with intent or conspiracy to wound with intent.

Judge Eddie Yip said the attacks were "indiscriminate" in nature, and that attackers had "collectively lost their minds."

"They collectively took the law into their own hands and put residents in extreme terror," Yip added.

Dubbed the 'Yuen Long' mob attacks, more than a hundred men dressed in white and wielding sticks had pounced on pro-democracy supporters at a train station in Yuen Long, a town close to the rural border with mainland China.

The attackers injured at least 45 people, including ordinary commuters and reporters.

An award-winning journalist was found guilty of illegally obtaining vehicle registration of potential assaulters in April. Bao Choy was conducting an investigation into police action on the day of the beatings for public broadcaster Radio Television Hong Kong.

The banned march marks the fifth anniversary of Beijing's rejection of a call for universal suffrage. Some protesters threw petrol bombs at police, who responded with tear gas and water cannon.

The US sanctions target officials from China's Hong Kong liaison office, which seeks to promote Chinese influence in the partly autonomous city.