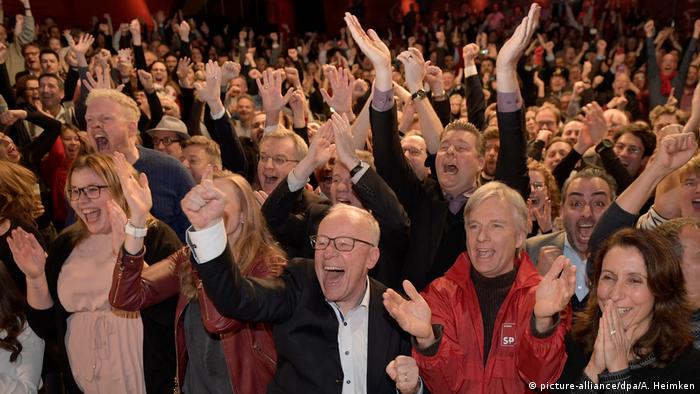 The center-left Social Democrats (SPD) have won the regional election in Hamburg, with partial results from Sunday's election indicating that the party will maintain leadership in the northern German city-state.

Provisional results from the electoral commission showed the SPD winning 39.0% of the vote.

Support for the environmentalist Greens surged, putting them in second place with 24.2%, meaning a likely coalition between the SPD and the Greens.

"This result should wake us all up bit and show us that, right now, there's a lot at stake," said German Health Minister Jens Spahn. "It's Hamburg. It's Thuringia. It's the poll results. It’s the position of the party."

The CDU politician is considered a potential successor to party leader Annegret Kramp-Karrenbauer, who had announced earlier this month that she will step down from her post.

The most closely-watched result of the night was for the far-right Alternative for Germany (AfD), with early results indicating that the party might not garner enough votes to remain in Hamburg's state parliament.

The AfD garnered 5.3% of the vote, just surpassing the bare minimum needed to stay in parliament. 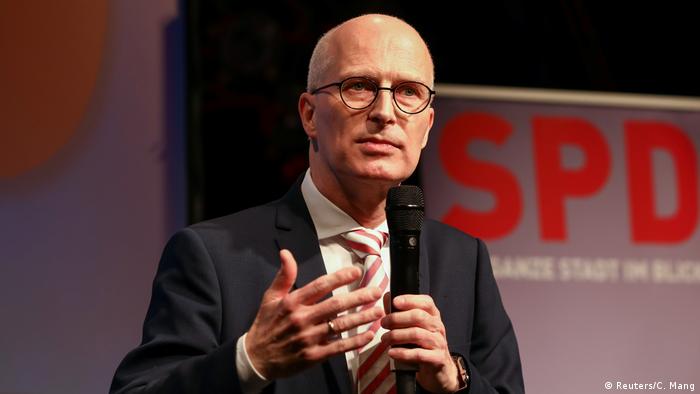 SPD supporters celebrated their party's results at an election party in Hamburg, but appeared to be even more jubilant about the possibility of the AfD exiting Hamburg's parliament. "Nazis out! Nazis out!," they cheered during a live broadcast on ARD.

Voter turnout surged compared to the last election, with local election officials reporting 62% turnout, compared to 56.5% in 2015. Fifteen parties competed for the 121 seats in the Hamburg parliament.

The Left party, meanwhile, secured 9.1% of the vote, followed by the business-friendly Free Democrats (FDP) with 5.0%.

Around 1.3 million people were eligible to vote on Sunday in the first state election since the furor over the ousting of the socialist Left party state premier in the central state of Thuringia, which spurred accusations that center-right parties the CDU and the FDP had cooperated for the first time with the AfD.

The controversy forced the newly elected state premier to resign within a day of taking office, and indirectly caused Kramp-Karrenbauer to step down.

The vote in Hamburg also follows a right-wing extremist attack in the city of Hanau this week, where a gunman opened fire on two hookah bars, killing nine people — the majority of whom were of foreign descent.

The shooting increased pressure on the anti-immigration AfD, which regularly comes under fire for its xenophobic rhetoric. Opinion polls showed that support for the party dropped this week in the aftermath of the attack in Hanau.

Farid Müller, Green candidate in the Hamburg-Mitte district, told Politico that public outrage over the ousting of Thuringia's leftist state premier Bodo Ramelow, with the help of the far-right AfD, swayed voters to back the SPD.

"The situation in the state parliament in Thuringia was, for the whole country, a shock," said Müller. "In this situation, a lot of people return to old parties like the Social Democrats."

Unlike several German states where the AfD is a major political force, the far-right party has one of the lowest levels of support in Hamburg.

The AfD first entered Hamburg's state parliament during the 2015 election with 6% and is currently represented in all of Germany's 16 state parliaments as well as in the federal Bundestag.

Should the party fail to pass the 5% threshold, however, it would be the first time the AfD would exit a state parliament.

A win in the northern German city-state would also likely give the SPD a much-needed boost on the national level, where they have been losing overall support. National support for the party is hovering at just 15%.

"We have to hold our ground against the federal trend," SPD lead candidate and incumbent Hamburg Mayor Peter Tschentscher told the news agency AFP ahead of the vote.

The SPD has also garnered local favor by supporting green policies like a proposal to convert a coal power plant to a natural gas plant to cut greenhouse emissions, and by pushing for lower rents and free daycare in the city.

Hamburg also hosted a climate rally on Friday with around 20,000 people in attendance, according to police estimates. Organizers say some 60,000 people turned up, including Swedish environmental activist Greta Thunberg.

People the world over are talking about the Elbphilharmonie concert hall, Hamburg's new landmark, but there's much more to see in the northern German port city. (18.02.2020)

About 3,000 people took to the streets of Hanau to call on Germany's government to take action against right-wing radicalism. Protesters carried signs slamming the far-right AfD's normalization of racist rhetoric. (22.02.2020)