Hamburg is Germany's second largest city. It's a Hanseatic beauty full of contrasts. Elegant and rough, green and urban — always startling and unexpected. 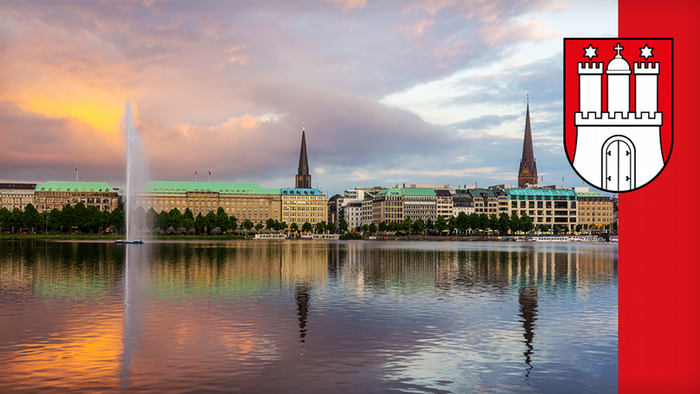 Hamburg is not just an ordinary city. It's a city-state. Home to 1,9 million people, it is one of the country's largest. Before the coronavirus outbreak, an average of 7,5 million guests would flock to the bustling port city each year.

A rainy, stiff breeze often blows over the city, but true Hamburg natives and their guests don't let it get them down. From musical theaters and museums to the Sankt Pauli red light district, there's always something to see in the Hanseatic city.

Hamburg, metropolis on the waterfront

The old Hanseatic city is connected to the North Sea via the Elbe, and the reputation of the maritime metropole precedes it. A dense network of waterways characterizes the cityscape. Whether you're sailing right in the city center on the Inner-Alster-Lakes, Hamburg's blue center, or chilling out on the Elbe beach, Hamburg should be discovered from the water, Check-in presenter Lukas Stege recommends. He went to check out before the coronavirus pandemic.

Hamburg from a bird's eye view

The Elbphilharmonie, the Hafen City and Speicherstadt — these are just three of the highlights that tourists should see in Hamburg. Here are the city's must-sees on a special guided tour from a drone's perspective.

A city of music

Since early 2017, concerts have been taking place in the Elbphilharmonie, the newest landmark in Hamburg's harbor area. Very quickly, the concert hall — designed by Jacques Herzog and Pierre de Meuron — established itself into the league of international tourist attractions. Hamburg has always been and remains a vibrant city of music.

Urban living made in Hamburg

Hamburg is setting an urban development benchmark. Since 2003, a completely new district called Hafencity has been developed. Empty warehouses and hardly used port basins are being transformed into modern residential quarters. Hamburg is growing and redefining urban living spaces. With elegance, audacity and foresight.

Hamburg's Speicherstadt is the largest historical warehouse complex in the world. Together with the adjoining Kontorviertel it is a living monument to the long trading tradition of the Hanseatic city. A guided tour through this "city in the water" is a unique experience.

Despite the early opening time (officially 5 in the morning), there's always something happening at Hamburg's traditional fish market. Whether it's a basket of fruit, fresh eel or tropical flowers, everyone finds something at the riverside — and in the market hall, there's dancing into the wee hours of the morning.

This cable-stayed bridge in front of Hamburg's skyline is only something for those who have no fear of heights. 50 meters over the southern arm of the Elbe, the distinctive structure spans the port. Built in 1974, it soon became a city landmark. How long it will remain standing is unclear: because the new tall container ships no longer fit underneath, it is to be replaced by 2030 at the latest.

When visiting Hamburg be sure to try a fish sandwich. Some culinary chefs have recently been reinventing the popular snack, lending it an international twist.

In the Miniatur-Wunderland in Hamburg's former warehouse district 1040 locomotives pull some 10,000 carriages over more than 15 kilometers of tracks, lined by thousands of houses, 269,000 figurines, 9250 vehicles and an incredible 13,000 tiny trees.