EU leaders have gathered in the Latvian capital of Riga for a partnership summit with former Soviet countries. But so far Britain's insistence on an EU referendum and Greece's economic crisis have dominated talks. 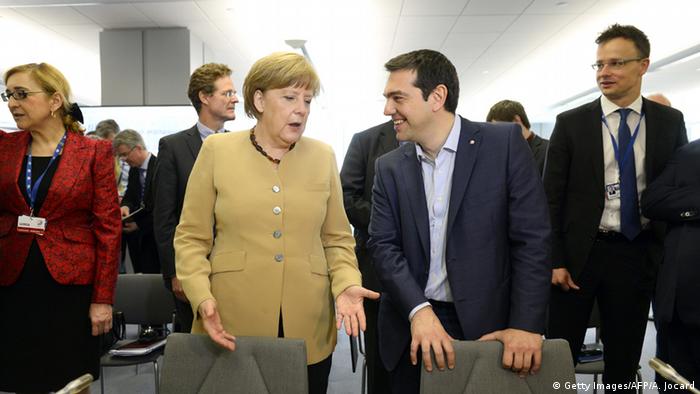 On Friday, Greece's problems were still receiving the most attention in Riga, where EU leaders had gathered to participate in the EU-Eastern Partnership Summit to review economic and political ties with Armenia, Azerbaijan, Belarus, Georgia, Moldova and Ukraine.

German Chancellor Angela Merkel spoke to the press about her meeting with Prime Minister Alexis Tsipras and France's president, Francois Hollande, a day earlier in the Latvian capital. "It was a very friendly and constructive exchange," Merkel told reporters. "But it is clear, the work with the three institutions has to go on. There is still a lot to do," she added, implying that Athens would have to reach an accord with its three creditors, the International Monetary Fund (IMF), European Central Bank (ECB) and the European Union (EU).

Discussions on Greece right now are focused on the last installment of 7.2 billion euros ($8.2 billion) out of a total of 240 billion euros in bailout funds. The EU has made a release of the money conditional to Athens' implementing reforms like reducing wages and introducing pension cuts. 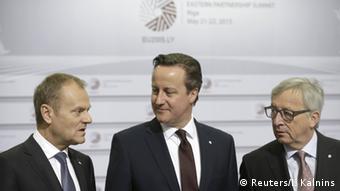 Another EU problem seemed to overshadow the summit in Riga after British Prime Minister David Cameron said he was determined to renegotiate Britain's membership with the EU and give Britons a proper choice on a reformed EU in a referendum by 2017. He said Britain could stay back in the EU provided certain reforms - which he hasn't spelled out - were implemented.

"There will be ups and downs. You'll hear one day this is possible, the next day something else is possible," he told reporters as he arrived in Riga on Friday.

However, EU leaders in Riga refused to make comments on the so-called "Brexit," with European Commission head Jean-Claude Juncker saying: "This is not a meeting concerning UK membership."

Summit not 'against' Russia

The European Union's priority in Latvia is to review their relationship with the six former Soviet states and ensure that tensions with Moscow do not rise in the backdrop of the Ukraine conflict.

"The Eastern Partnership is not aimed against anyone, especially not against Russia," Merkel told the German parliament before leaving for Riga, adding that the meeting was also "not an instrument" for EU enlargement. 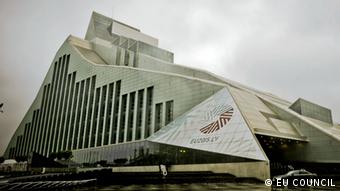 The national library in Riga, venue of the EU- Eastern Partnership summit

Several of the Eastern partnership countries have expressed their desire to join the EU or enhance economic cooperation, but European leaders have been wary after the 2013 summit in Vilnius ended in chaos when Ukraine's former president, Viktor Yanukovych, refused to sign an association accord with the EU at the last minute.

His refusal sparked public protests, after which he was deposed and finally replaced by President Petro Poroshenko. But Ukraine's woes have been prolonged, after Russia annexed Crimea last year, followed by a bloody conflict with separatist rebels in eastern Ukraine, which has continued despite a ceasefire.

The EU and the United States accuse Moscow of aiding the rebels and have slapped extensive sanctions on Putin's government, contributing to tensions in the region.