Grand coalition - A controversial alliance | Germany| News and in-depth reporting from Berlin and beyond | DW | 23.09.2013

Angela Merkel needs an ally. Her party missed the absolute majority in Sunday's election. The most obvious partner would be the SPD in a grand coalition, but they would have difficulty explaining this to their members. 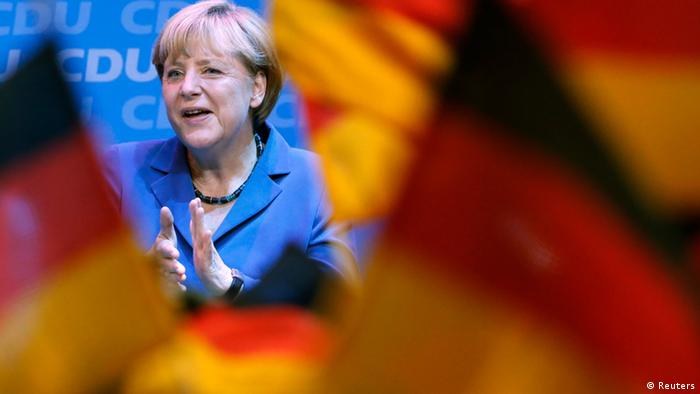 Angela Merkel is the winner of the federal elections of 2013 in Germany. The conservative CDU, led by Merkel, together with the Bavarian sister party, CSU, led by Horst Seehofer, got 41.5 percent of the vote. Despite this great success, the two parties will not be able to run Germany on their own. For this, it is missing just a few seats in parliament.

Now, the difficult time of finding coalition partners has started. Merkel's previous partner, the liberal FDP, missed the threshold for entering parliament, leaving the CDU/CSU with only three options:

Theoretically, they could join forces with the Left Party. But this option is highly improbable since the conservative CDU/CSU parties are more to the right of the political spectrum and have virtually nothing in common with the Left party.

The second option would be a so-called black-green coalition. At the state level, this has already happened in Hamburg. However, this coalition failed after two and a half years in 2010. At the federal level, the CDU/CSU and the Greens have never worked together before.

Jürgen Trittin, the top candidate of the Green Party, was not very positive about such a coalition on election night. "The probability that this works out isn't very high", he said flatly. 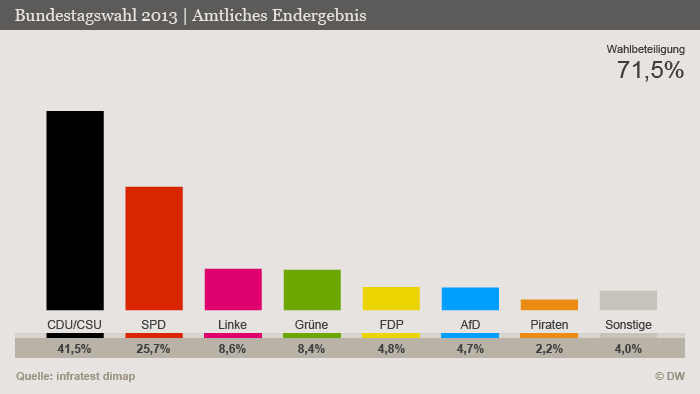 Results of the 2013 general election in Germany

That leaves the CDU/CSU with the third possibility: A grand coalition, which is a government of the two strongest parties in parliament, the CDU and SPD. The Social Democrats, with chancellor candidate Peer Steinbrueck, got 25.7 percent of the vote. Such a coalition is likely, since it has already been done twice before at the federal level.

In 1966, the CDU and SPD formed a government for the first time. The coalition of CDU and FDP had just fallen apart. Willy Brandt (SPD) became Vice-Chancellor under Kurt Kiesinger (CDU). "The grand coalition of 66-69 dealt with the first serious economic recession in the history of the Federal Republic," Everhard Holtmann, research director at the Center for Social Research at the University of Halle-Wittenberg, told DW. 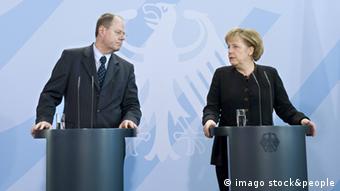 From 2005 to 2009, Angela Merkel also led a grand coalition. It also did a lot of positive work: "The global economic and financial crisis that hit us in 2008 was rolling towards Germany, but was overcome. That says a lot for the effectiveness and efficiency of a grand coalition," Holtmann said. However, the SPD got a very bad result in the election after the coalition in 2009.

The opposition as part of the government

Before this year's federal election, the party leaders of the CDU and the SPD did not categorically exclude a grand coalition. On the part of the SPD there is, however, more reluctance, especially from the left wing of the party. According to the German weekly news magazine "Der Spiegel", some Social Democrats have asked that all party members be allowed to vote on a possible grand coalition with the CDU before coalition negotiations begin.

"It is going to be very, very difficult for the SPD to share the idea of ​​a grand coalition with its members," Klaus Schubert, Professor of German Politics at the University of Münster, told DW. "The party had to suffer because of the result of the last grand coalition for a long time. In the former grand coalition, there were only marginal differences between the two parties, but now there is a huge difference." According to Schubert, the SPD must be careful that it does not go down. To emphasize their own profile, they would have to work as a kind of opposition to the government within the grand coalition. 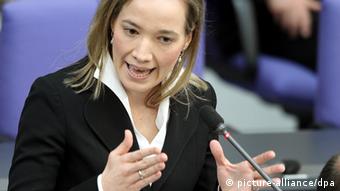 Even though Peer Steinbrück before the election ruled out that he would assume a ministerial position in a possible government with the CDU, he would like to be chief negotiator of the SPD in any upcoming exploratory talks. According to Schubert, he will try to work out a high price for a coalition with the CDU. In particular, approaching the sister party CSU is likely to be difficult.

First, the CSU would most likley want to retain the controversial home care benefit, a payment to families who do not want to put their infants in a day-care center. "I assume that Seehofer will not back down from the success that he has had for his party since," the political analyst from Münster says. "The SPD would probably have to accept that." The second point of contention would be the car toll that the CSU wants to introduce on German highways. Steinbrück reiterated on election night how much he opposes that idea.

If programmatic differences can be eliminated, a grand coalition certainly has the potential to achieve much for the Germans, said Holtmann. "Due to the compromises that have to be made for the formation of a grand coalition, the needs of a relatively wide range of social interests could be met." Maybe that's one of the reasons why a collaboration between the CDU and the SPD was so popular with the electorate. According to a survey before the election, more than half of all Germans voiced support for a grand coalition.

For the first time since 1949, the liberal Free Democrats (FDP) will not be represented in Germany's parliament. The party leader has announced his resignation. Many parliamentarians and staff face an uncertain future. (24.09.2013)

In an interview with DW, former US ambassador to Germany, Philip Murphy, explains why he was stunned by the election outcome and why he thinks a grand coalition could boost Germany’s role in Europe. (23.09.2013)