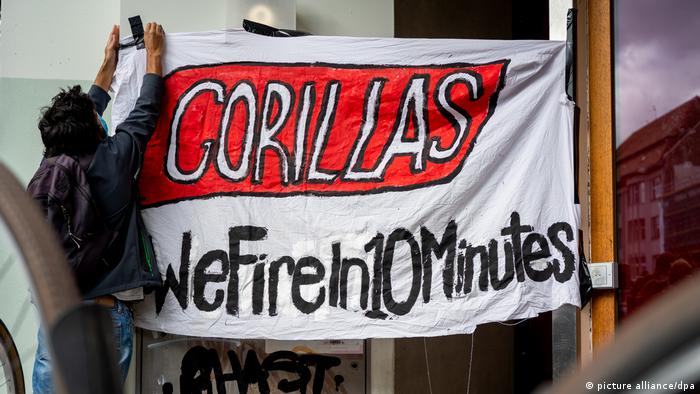 The company is cracking down on striking workers

Several dozen Berlin-based delivery workers were fired by Gorillas Technologies on Monday, October 4, for participating in strikes against the company in protest of unfair working conditions.

The Gorillas Workers Collective, a group of workers who have previously led strikes against the company, called for a protest for said terminations in front of the company's headquarters in Prenzlauer Berg on Wednesday afternoon. An estimated 150 protesters gathered for several hours, during which time the front doors to the headquarters remained locked.

Duygu Kaya was among the Gorillas riders who were terminated. She had also participated in actions and meetings with the workers' collective.

"They fired some of us with termination letters, and others through phone calls," Kaya said. "Workers got calls from private numbers and were asked, 'Did you participate in the strikes?' and if they said yes then they were fired."

Kaya estimates that around 30 to 40 workers were fired, although she suspects that Gorillas Technologies intends to rehire some of the workers now that the strikes have been effectively squashed.

Asked for comment, Gorillas Technologies stated: "There have been a series of unannounced wild strikes, blockades and the barricading of warehouse emergency exits by employees from a number of our locations in Berlin and Leipzig. Under German law, unannounced, non-unionized, spontaneous strikes such as these are not permitted, and thus have no legal basis." 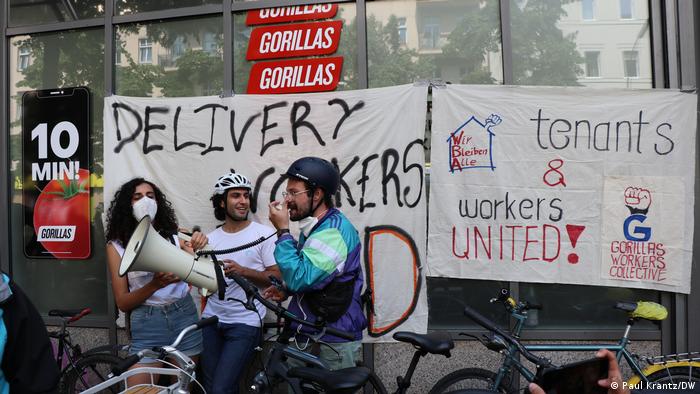 On Twitter and messaging platforms numerous Gorillas workers have shared screenshots of schedules which violate the German labor law requiring workers to have 11 hours off between shifts.

"This is illegal," Kaya said, "and if the company commits illegal actions, the worker has the right to stop working until the company corrects those mistakes."

Following a first strike in July this year, the Gorillas Workers Collective produced a list of demands. These demands included points about receiving accurate and equal pay, being scheduled in a way that allowed riders a couple days off in a row, and being provided with better equipment, such as cargo bikes, for heavy loads.

Workers who decided to strike last week did so because they felt demands had not been met.

Among workers' more recent concerns is the sense that the company has become obsessed with optimization to the detriment of employees who are therefore expected to fulfill more orders in less time.

"With these optimizations there is so much stress on every rider," Kaya said. "Depending on the warehouse, some people cannot even take proper breaks."

According to the company's website Gorillas operates 16 different warehouses in Berlin. While warehouses function under the same structure, their day-to-day operations are largely independent, and they are known among employees to have wildly different atmospheres.

The recent strikes were organized by workers from three warehouses: in Bergmannkiez, Gesundbrunnen and Schoeneberg. Other warehouses in Berlin and in other cities continued with operations as usual.

"For me, right now, there is no problem," said a rider from the warehouse on Schoenhauser Allee. "I see my supervisors helping and everyone is doing their best to fix problems."

However in Bergmannkiez, where workers who went on strike were fired, the workers' collective reported that deliveries were continuing on the backs of only a couple of contracted workers while the rest of the workforce was replaced with day laborers from Zenjob, an online platform which connects part-time workers with daily gig work.

Gorillas warehouses often use ZenJobs workers to fill in when they are short-staffed, but replacing teams of fired workers with gig workers is potentially setting a new precedent. This could be seen as particularly ironic for a company that has proclaimed itself as a "counter model to the gig economy."

"The CEO comes from Turkey as do I," said Kaya. "Many of us have come to avoid the oppression there. Every rider in this company has their studies or a degree but they cannot find proper jobs because they don't know German or their diplomas aren't recognized. This CEO knows this and he uses it as a business tool. Seeing someone from my country exploiting migrant labor in this way is quite hurtful."