Around one in 10 people on the bloc's labor market have got work through digital platforms, such as Uber or Deliveroo, but many miss out on workers rights. 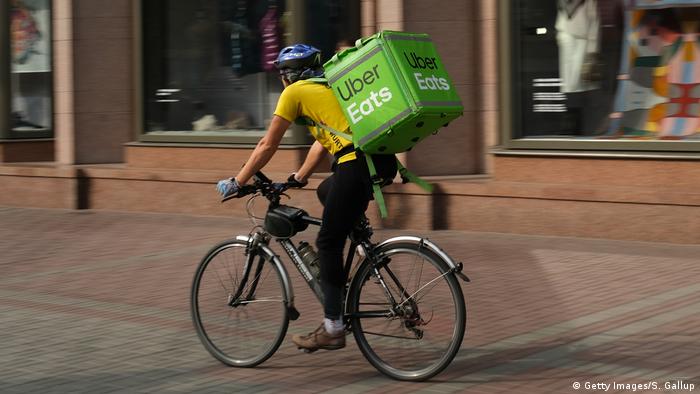 The European Commission on Wednesday launched a public consultation to look into the legal employment status and conditions of gig economy workers.

It is the bloc's first step aimed at improving the rights of such workers, who work through digital labor platforms, such as ride-hailing or food-delivery apps.

Uber, Just Eat and Deliveroo are among some of the digital platforms used by gig economy workers in Europe.

Such platforms have been particularly in-demand during the coronavirus pandemic, as consumers turned online during lockdowns across the EU.

The gig economy allows for flexible working conditions, as well as "job opportunities and additional revenue, including for people who might find it more difficult to enter the traditional labor market," the commission said on Wednesday.

But companies working in the sector are frequently accused of taking advantage of the self-employed status of workers to avoid covering social security payments and other benefits.

Courts in the UK and Spain have already overruled "self-employed" claims from some companies in the sector.

Prosecutors told Uber Eats, Glovo, Just Eat and Deliveroo in Italy their couriers were employees and not independent workers.

The companies were fined €733 million ($892 million) for breach of labor safety rules. The more than 60,000 couriers must be offered non-permanent contracts with fixed pay, the Milan prosecutors' office said in a statement.

What will the EU consultation do?

The first phase of the EU initiative will see six-week consultations with trade unions and employer organizations about their views on improving working conditions.

If labor and business representatives choose not to enter negotiations on the issue, there will be a second round of consultations on possible measures the EU could take.

If the two side still do not come to the table after that, then the commission said it will "put forward an initiative by the end of the year."

Uber said it plans to work with policymakers and social groups on the proposal.