The Berlin-based grocery delivery startup, which launched its service during the pandemic, is expanding rapidly, but workers say the billion-dollar company should fix local problems first. Gorillas Technologies has faced multiple worker strikes and protests in the past month over the termination of certain employees, a lack of suitable equipment and pay discrepancies.

On Saturday, July 17, the Gorillas Workers Collective organized a mobile protest in which employees and activists cycled to three different delivery warehouses, temporarily halting operations at each one.

Gorillas is an app-based delivery company that was founded in Berlin and launched in June 2020. The company succeeded in reaching an estimated valuation of $1 billion (€850 million) in just nine months and hiring 10,000 employees.

Gorillas is already among the top delivery apps in Germany, but the number of competitive companies is growing fast. Whether or not Gorillas workers succeed in getting their demands met could set a precedent for delivery and warehouse workers in Germany.

"There are a lot of issues," said Gorillas rider Anna Zakelj, who named missing pay, insufficient rain gear and chronic back pain from carrying heavy loads as her primary concerns. "The company is expanding so quickly without fixing existing problems."

Cansel Kiziltepe, a current member of the Bundestag for the Social Democrats, joined the protesters in solidarity.

"I've supported the Gorillas workers' fights for a few months now," Kiziltepe said. "It's important to send a message to the delivery industry that codetermination rights need to be fulfilled in Germany. Our goal is that wages and contracts are organized by collective agreements."

Recent protests and wildcat strikes have been organized by the Gorillas Workers Collective.

According to Jakob Pomeranzed, a member of the collective, the group began organizing after February, when riders were expected to complete deliveries without work-issued winter gear in heavy snow.

"In workers' chat groups there were messages about workers falling off their bikes," Pomeranzed said. "And there were no jackets at that time. The jackets we got arrived in March and reached all the warehouses by April."

Eventually, workers at two warehouses started a strike, which grew until the company called off work for the week. In the months that followed, a group of Gorillas workers created the collective. On June 3, a general assembly was held to elect an electoral council, which plans to organize elections for a legal workers council. 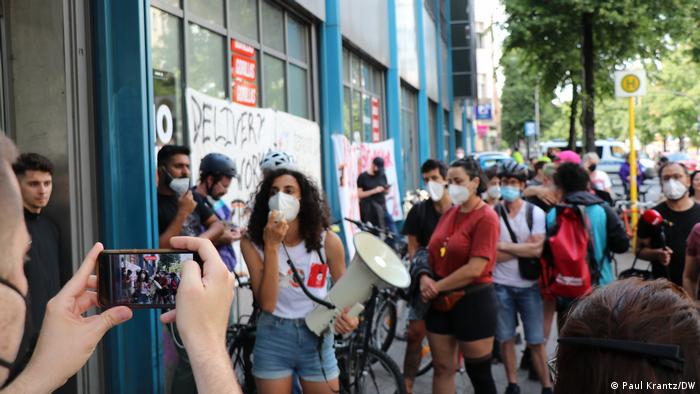 The Gorillas Workers Collective escalated protests in June, after hundreds of employees complained that their paychecks were inaccurate — most saying they were paid less than they were owed.

"Every month I have been paid less than I'm owed," Gorillas rider Kristopher Goanez said. "Last month I was finally paid 40 hours that I was owed from three months ago."

The scope of the issue was made clear when a popular meme account (@GorillasRiderLife) began sharing messages from riders who claimed they were underpaid.

"We realized there was a necessity for union and community within the riders and warehouse workers," a creator of @GorillasRiderLife said. "And we had randomly landed into filling this void."

On June 28, members of the collective and concerned employees protested in front of the company's headquarters in Prenzlauer Berg.

CEO Kagan Sümer, who reportedly ran the first Gorillas warehouse out of his apartment last year, arrived at the protest and made a statement. He acknowledged that 250 payment issues had been identified and promised they would all be resolved. Protesters at the scene demanded that resolutions be reached quickly.

"We are here to listen. ... We need to keep this communication going," Sümer told the protesters. "And I support that you are here to act."

Protesters, however, pressed him for more solid solutions, and also deadlines for those solutions.

"He's saying it's good you're fighting for your rights, but if they are rights we should already have them," Pomeranzed said in response to Sümer's comments. "We should not have to fight for them to pay us our contractual hours or to pay for our sick leave."

In the following days, the Gorillas Workers Collective issued a list of demands that included 19 points. The first two involved resolving all payment issues within 48 hours. Other demands included giving full-time riders at least two days off in a row per week and providing bikes with cargo carrying components.

Many Gorillas warehouses lack cargo bikes, forcing riders to carry large loads of groceries on their backs. Numerous riders have reported back injuries after working for the company for six months or more.

"I was injured while carrying a heavy order," Gorillas rider Fernando Bolanos said. He was diagnosed with cervicobrachial syndrome. "My doctor sees many riders because she speaks Spanish. She told me this injury is common among Gorillas employees."

Some Gorillas warehouses are equipped with cargo bikes, but most riders are given bikes with no cargo-carrying components. Bolanos said in his case baskets had been removed from riders' bikes.

"The reason, I was told, was because riders taking deliveries on the baskets meant that people couldn't see the Gorillas logo," Bolanos said.

Gorillas currently operates in 21 German cities, and has recently expanded to the United Kingdom, Belgium, France, Italy, the Netherlands and Spain.

Responding to a request for comment, Gorillas replied with a formal statement that was published in response to the recent strike.

Gorillas wrote: "We at Gorillas have been the countermodel to the gig economy since we were founded one year ago. From day one, we have employed our riders on a permanent basis with social security, sick pay and paid vacation. ... We are and we will remain a rider-centric company. That's why constructive dialog with our employees, including those from the group Gorillas Workers Collective, will continue to be our focus."

The foot soldiers in the food delivery wars

Around one in 10 people on the bloc's labor market have got work through digital platforms, such as Uber or Deliveroo, but many miss out on workers rights.