Hundreds of errant flightless birds have confounded attempts to control their population and are gobbling up farmers' crops. North German agriculturalists want to start shooting the birds, but face legal hurdles. 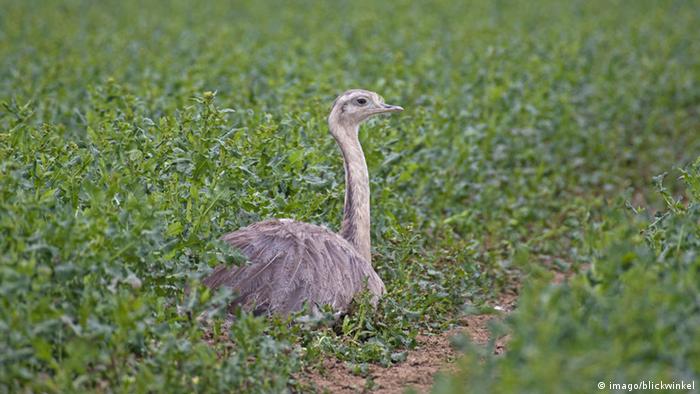 The autumn census of Europe's only wild rhea population, at the border of Mecklenburg-Western Pomerania and Schleswig-Holstein, found numbers had jumped from 205 birds in spring to 566, according to the Ministry of Agriculture.

The population explosion of greater rheas came despite population control efforts in the Schaalsee Biosphere Reserve.

Almost 300 of the counted birds were juveniles born this year, presumably due to the uncharacteristically warm and dry summer.

The birds, which are distantly related to the ostrich and emu, can grow to 170 cm (67 in) tall and can weigh up to 40 kg (88 lb). Farmers dislike the three-toed giants as they can devour cereal and rapeseed fields.

The local farmers' union claims the birds cause tens of thousands of euros of damage to farms each year. They also occasionally stroll onto the autobahn, causing headaches for commuters.

The German population is descended from a few breeding pairs which escaped from an exotic meat farm near Lübeck in the late 1990s and early 2000s. They migrated to Mecklenburg-Western Pomerania and found a home for themselves in the extensive fields and meadows of the UNESCO-listed Schaalsee Biosphere Reserve, where they prospered.

Wildlife officers have been controlling the population by drilling the rhea's eggs and covering them in wax, but the campaign appears to be getting less effective.

Farmers have been lobbying the government to expand their efforts and allow the male birds to be shot, and state authorities have agreed to look into alternative population control methods. However, the so-called neozoans (introduced species) are not listed as an invasive species as they do not cause damage to native fauna and flora, complicating eradication efforts.