The majestic sea eagle was on the brink of extinction just decades ago in Germany. Now, the birds of prey are making a slow comeback - the "Bird Man" of the Mecklenburg lakes helps by getting up close and personal. 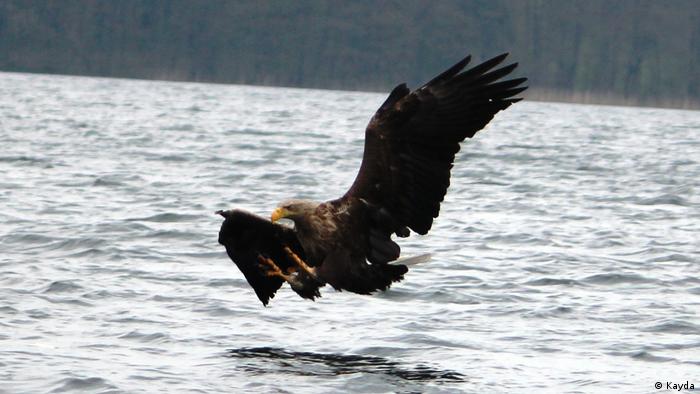 The man at the helm waves a dead fish over his head and yells, "Come get the eel!" His eyes have a roguish sparkle, and his grey walrus mustache resembles a permanent smile on his face.

Fred Bollmann is the town of Feldberg's eagle ranger, a Grizzly Adams in camouflage gear, who skipped school as a child to go birdwatching.

Rain or snow, Fred heads out at dawn, armed with his binoculars. He puts out dead game or fish for birds, and spends hours motionless in the bushes observing them. Nobody else in Germany gets as close to wild eagles as he does.

Small waves quietly slap against the boat that slowly glides across the lake in Mecklenburg-West Pomerania, in far northeastern Germany. "I'm going to throw a small fish," Bollmann tells the four amatuer photographers sitting in the boat.

The fish flies through the air and smacks onto the surface of the water 10 meters (33 feet) away. He scans the sky for the Eurasian sea eagles that nest along the shores of the Breiter Luzin lake. "Nah, they're not really into it yet," he decides, collecting the fish to use again later. 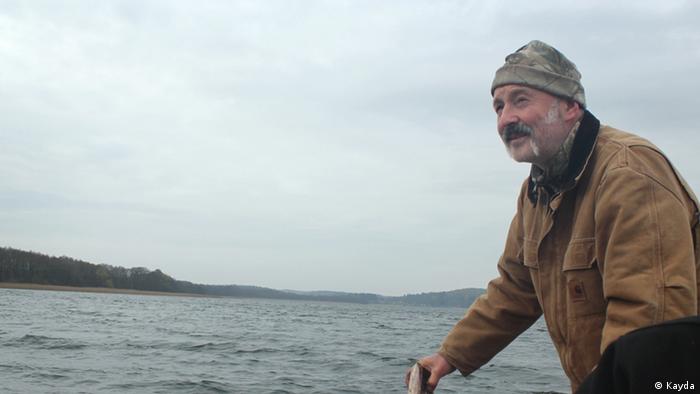 For more than 16 years, Fred Bollmann has been approaching the mighty yet shy birds of prey on the Mecklenburg Lake. Most German eagles live in the network of lakes and deciduous forests on the plateau here. But Bollmann also gets to see rare kites, black storks, kingfishers, cranes, herons and cormorants - time and time again.

The ranger is constantly scanning the skies to point out these impressive and beautiful birds to children, photographers and other visitors. "I hope that this will make them appreciate nature more and that perhaps they will also protect it more," he says.

He says this as his "duty and a point of honor to regularly take along the children from the local kindergarten" when he stalks the eagles.

Peter Wernicke, his former boss and head of the nature park Feldberger Seenlandschaft, says that conservation needs dedicated activists like Bollmann. "For Fred, the eagles and their survival are paramount," he tells DW.

Neither he nor the conservation group WWF find it questionable that Bollmann baits the eagles for his tours. "On the contrary," says Thomas Neumann from WWF Germany, "that helps us to learn more about these magnificent animals every day, and how we can better protect them."

That Bollmann manages to entice two of these extremely shy eagles to "hunt" the fish he throws into the water is "truly unique," say both men.

Even if the population of the Eurasian sea eagles is recovering thanks to the prohibition of hunting and the banning of pesticide DDT in the 1970s, they are still threatened.

An unexpected side effect of the pesticide was to make the apex predator's eggshells paper-thin - as a result, most cracked during brooding, killing generations of offspring. 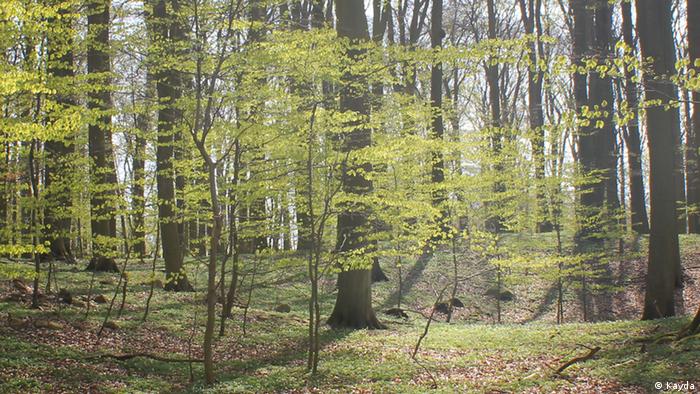 A pristine ecosystem is essential for many rare eagle species to settle in an area. The Feldberg Lake District

Today, there are around 700 breeding pairs again in Germany. But ospreys and lesser spotted eagles are still rare, as they are more selective about what they feed on and where they nest.

"The smallest one, the lesser spotted eagle, is being left behind," Bollmann says. That's because natural marsh areas with rats and mice are being drained for canola and maize fields.

The government should do something about this - such things need to be decided politically, the Bird Man believes.

On top of that, eagles are facing new threats from drones and wind turbines. Both should be banned in and around eagle habitat, adds Bollmann.

Conditions on the Mecklenburg Lake Plateau are good for the eagles, which need high nesting sites and clean bodies of water.

It's not long before Bollmann spots the fabled bird. "There's one wobbling towards us," he exclaims excitedly. A dark, almost rectangular shadow is majestically circling in the sky.

Eurasian sea eagles can have a wingspan of up to 2.5 meters. Although they don't sexually mature until they are 5 years old, they can live to be well beyond 20.

This species is an opportunistic feeder and eats pretty much anything - preferably the intestines of dead animals. Fish is one prey they actually hunt.

Bollmann throws a fish. The photographers on the boat aim their cameras - but the eagle veers off and lands in a tree some 300 meters away. "He wants eel," Bollmann says. That's his favorite dish, and with his excellent eyesight "he sees perfectly that these are just small fish." The proverbial eagle eye has magnification power seven times greater than humans, and is five times more light sensitive.

Now Bollmann waves an eel and whistles loudly. The mighty grey-brown bird in the treetop reacts promptly. His scream is surprisingly squeaky. "Eagles aren't vocal artists," Bollmann quips. Then the king of the skies, with his yellow beak and white tail, swoops down. Everyone on the boat holds their breath while camera shutters clatter non-stop. 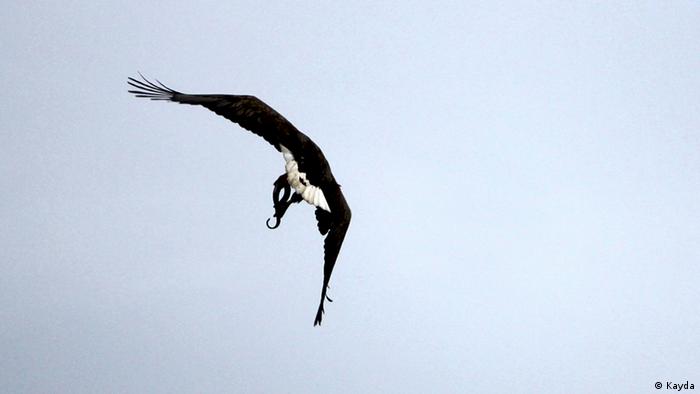 It is very rare to see the shy eagles this close

Spreading its tail feathers, the heavy bird comes nearly to a complete halt, only a few inches from the surface of the water. Its yellow talons reach forward, gripping the eel - and within an instant, the eagle is climbing back up into the sky. All of this happens just meters from the boat.

Content sighs spread among the photographers, some of whom have traveled 500 kilometers (311 miles) to experience this. "An incredible, breathtaking feeling, how it came down when called, got closer and closer. My heart was pounding quite a bit, I had difficulty focussing," one of the photographers said.

Eagle ranger Bollmann is happy as well. His eel-obsessed king of the skies was gracious, once again. It doesn't always work out this well, he says. These aren't trained zoo animals, after all, but wild birds of prey. It took him years of training to get two of them to occasionally accept a delicacy from him.

In a casual tone, he promises that his "catering service" will be back again later: "I'll be back at five - then I'll bring dinner."