Big South American Birds on the Loose in Northern Germany | Germany| News and in-depth reporting from Berlin and beyond | DW | 03.08.2008

Big South American Birds on the Loose in Northern Germany

Birds as big as people are breeding out of control near Germany's Baltic coast, giving a shock to sparrows, blackbirds and other small-fry inhabitants. Some think the interlopers could pose a menace to native species. 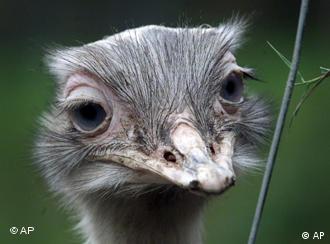 Some find nandus incredibly cute, others see them as a menace

The newcomer is the nandu a tough, ostrich-style avian from Argentina, which is normally bred for meat and feathers. It is also known as a rhea.

Six nandus escaped from a German farm eight years ago and began multiplying furiously in a nature reserve south of the German city of Luebeck. Thanks to German nature-conservation laws, the pushy nandus can grin at hunters, because no one is licensed to kill one.

Hunter Wolf Juergen Menken can shoot deer and ducks, but the nandu is off limits.

"They are practically an established species," he said ruefully. 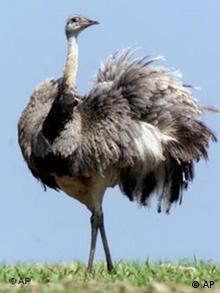 The nandu is so large that it scares cattle

What is more, the nandus, which are flightless but excellent runners, are spreading eastwards.

German land conservation student Frank Philipp has taken a close look for a thesis at the birds and counted more than 30 in an 80-kilometer (50-mile) area.

"I found three nests with more than 50 nandu chicks this spring," said Philipp, a student at Dresden University. He did not venture a judgment on how they are affecting native flora and fauna.

"Our information is that they have no ill effects on native species," said Lothar Woelfel, nature conservation officer for Mecklenburg-Western Pommerania state. "We used to find the nests and smash the eggs but stopped doing that a few years ago."

Locals say they are growing accustomed to the birds.

"We're getting used to one another, but I still say they don't belong here," said Thomas Boehm, an organic farmer in the small town of Schattin.

He said the birds eat food needed by large native animals such as cranes. A visit by a nandu is also scary for other animals. Even Boehm's tough Galloway cattle have stampeded in fright after seeing a nandu mating dance and broken down fences. He calls the immigrants "aggressors" that are seizing space from local animals. 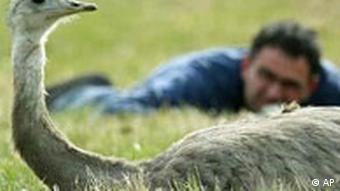 The birds have been kept under close watch

Boehm said he believes the bureaucrats have missed their chance to eradicate the nandus and have misunderstood the law. He said the Convention on International Trade in Endangered Species of Wild Fauna and Flora does not protect non-native species from extinction.

"The birds have established an ecological niche for themselves," he said, agreeing with hunter Menken that the nandus are snatching protein-rich insects from local birds to feed to their own chicks.

But the nandus do have some friends, including Sven Langmaack, a hotel owner in Schattin. He offers nandu-spotting holidays and keeps a close eye on the big birds' nests to ensure that the anti-nandu faction does not smash the eggs.

"They are such peaceful birds, and a joy to look at," he said.

A new study warns that destroying the diversity of animal and plant life can have serious repercussions for the world economy, with the poor bearing the brunt of the cost. DW-RADIO spoke to the report's lead author. (23.05.2008)

Scientists studying the twittering and chirping of birds have discovered a key genetic link in the "language gene" that may explain why some human infants have problems learning to speak. (17.12.2007)