Researchers have found 60 packs of wolves living across Germany. That's 13 more than last year. The news is likely to frustrate some farmers who believe the predators are dangerous and attack livestock.

The number of wolves in Germany has grown, according to data released Wednesday by the Federal Agency for Nature Conservation (BfN) and the Documentation and Counseling Center of the Federation of the Wolf (DBBW).

The researchers, who counted the wolves by analyzing photographs of traps, animal feces, and other traces, found 60 packs are now living across the country, which is 13 more than a year ago.

Overall, there are between 150-160 adult wolves in Germany, Beae Jessel, the president of BfN told reporters in Berlin. A year ago, there were estimated to only be around 140 wolves and 47 packs.

Read more - Germans divided over return of the wolves 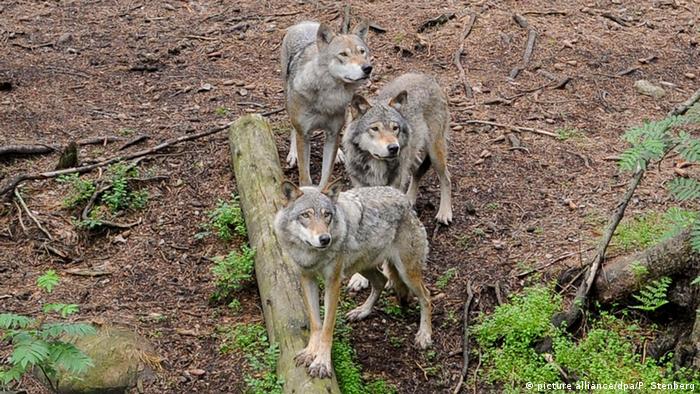 The number of wolves in a pack varies, but is normally between three and 11

In recent months, farmers and activists have clashed over the management of wolves. Farmers argue the predators have attacked their farms and killed their sheep since their reintroduction to Germany in 2000.

The animals are protected by strict laws in the country, because they are an endangered species. As a result, killing them is prohibited. But the ban was recently lifted for a specific pack in the forests of Upper Lusatia on Germany's border with Poland, sparking protests from activists.

Many livestock owners and hunters want permission to shoot wolves, especially if their animals are under attack. However, animal rights activists and the BfN say this should not be allowed.

Environmentalists say electric fences or livestock dogs could be used to protect farmland instead, adding that even if wolves do kill sheep, they are not automatically a danger to humans.

"We do not know of any single attack on humans since wolves have been back in Germany," BfN President Jessel said.

Most wolves were recorded in the eastern German states of Brandenburg and Saxony, and Jessel says that, despite multiplying in number, they are keeping to the northeast of the country.

Wild wolves were eradicated from Germany at the end of the 19th century. But in 2000, wolves from neighboring Poland moved west in search of new territory and crossed the German border.

Road traffic is the biggest danger to the animals: 140 of the around 200 dead wolves since 2000 died in road accidents. From May 2016 to April 2017, five wolves were reported to have been killed illegally.

The debate over the management of wolf populations has raged across Europe in recent years. Many governments allow controlled killing of the animals to prevent illegal hunting.

On Tuesday, a Norwegian court issued an injunction temporarily stopping the hunting of 12 wolves in the Oslo region at the request of the World Wildlife Fund.

Bears in Switzerland, wolves in Germany. Wildlife that humans had once driven to extinction in Central Europe is making a return in the 21st century. The conditions for their survival in modern times look good. (28.08.2005)

Germany No Longer Keeping the Wolf from the Door

The mournful howling of wolves is echoing these days through the forested woodlands of eastern Germany for the first time in centuries. (25.08.2008)

Germany's wolf population has been gradually increasing since the animals were reintroduced in 2000. New data shows there are now up to 160 adult wolves in the country, but the animals still face a range of threats. (24.11.2017)