With players such as Oezil, Cacau, Khedira, even Podolski, the German national team lining up against Australia on Sunday has its roots all over the world. And it's no fluke either. 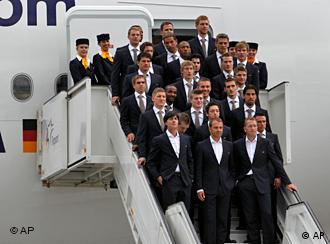 Of the 23 players representing Germany at the World Cup, 11 have foreign backgrounds. More than half of the outfield players selected by Joachim Loew were either born outside Germany themselves, or have a non-German parent. The squad has roots in eight different countries - nine when Germany's included.

The role of sport in incorporating ethnic minorities into society is one of the Olympic movement's central leitmotifs.

"Sport is a fantastic instrument of social integration," said Jacques Rogge, president of the International Olympic Committee, at a recent lecture in Darmstadt.

Germany's favorite sport is a working-class game, but not exclusively so. Soccer is cheap to take up but promises great riches at the top, and so offers the chance to advance and climb the social ladder. These opportunities are keenly seized by youngsters from lower-earning, ethnically-diverse backgrounds. 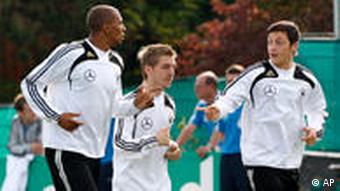 The national team is redefining what it means to be German

According to the most up-to-date figures from the Federal Statistics Office, one in five people living in Germany in 2008 was of foreign descent. From the total of 15.9 million with roots abroad, 2.9 million were from Turkey. Two likely starters for the national team at the World Cup - Serdar Tasci and Mesut Oezil - both have Turkish parents. "A gift for German football," was how Joachim Loew described Oezil.

It works both ways. The sport plays a leading role in a successfully multicultural society today. Germany hopes to reap the rewards with its ethnically-diverse team on the pitch in South Africa.

Lukas Podolski, Miroslav Klose and Piotr Trochowski were born in Poland, and moved across the border as children. All have been part of Germany's international set-up for years. Youngster Marko Marin was born in war-struck Bosnia-Herzegovina. His parents moved to Frankfurt when he was two, and, when he came of age, Marin decided on a German passport. Mario Gomez was born in Baden-Wuerttemberg, but his father comes from Spain. 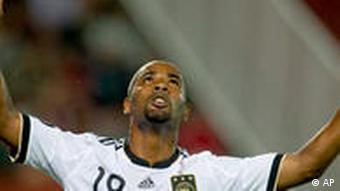 Gomez is likely to miss out on a place in Germany's attack, in favor of an in-form Brazilian-born striker nicknamed "Helmut." More commonly known as Cacau, he was born in Sao Paulo province, and moved to German lower-league football ten years ago. He gradually rose through the ranks to become a Bundesliga winner with Stuttgart in 2007. He's just extended his contract at the club until 2013.

Cacau became a German citizen in 2009, and the call from Joachim Loew came quickly. "I am glad that Germany has adopted me," he said. "My whole mindset is German."

"Never mind where you come from"

The German Football Association (DFB) is not afraid of celebrating its eclectic new generation of players. Since 2007, the DFB and its general sponsor Mercedes-Benz have given an integration prize under the label "Football: Many cultures - but a Single Passion." They also put on a spectrum of projects and activities to promote the integration of youngsters from different backgrounds into society, both by playing soccer and using it as an example. 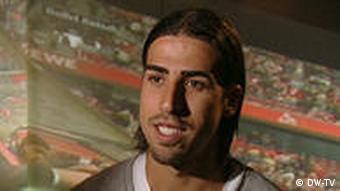 Khedira completes a trio of players with African roots

But an impression of a complete acceptance of ethnic diversity in German soccer would not be fair. Far-right groups were reprimanded in court for racist publications attacking black German national players Gerald Asamoah and Patrick Owomoyela only four years ago, in the build-up to Germany's World Cup.

Included in Germany's 2010 squad are Dennis Aogo, whose father is Nigerian, and Jerome Boateng, born in Berlin to a Ghanaian father. Sami Khedira is set to play an important role after captain Michael Ballack was ruled out through injury. Ballack was notable for being born in the former East Germany when he made his national team debut in 1999. His replacement has a Tunisian father, and is well-versed on the collective goals of a diverse group of players.

"We are a team," says Khedira. "We all want success at the World Cup, never mind where you come from."

Born and raised in Brazil, Cacau might be the most exotic member of an ethnically-diverse German squad. DW spoke with the Bundesliga striker about his transition to playing for Germany. (19.05.2010)