Germany′s Russia policy in tatters after Russian invasion of Ukraine | Germany | News and in-depth reporting from Berlin and beyond | DW | 24.02.2022

Germany's Russia policy in tatters after Russian invasion of Ukraine

Germany's historic Russia policy, which has been focused on "special relationship" diplomacy and economic ties rather than confrontation, has been struck a blow by Russia's escalation. What now for Berlin? 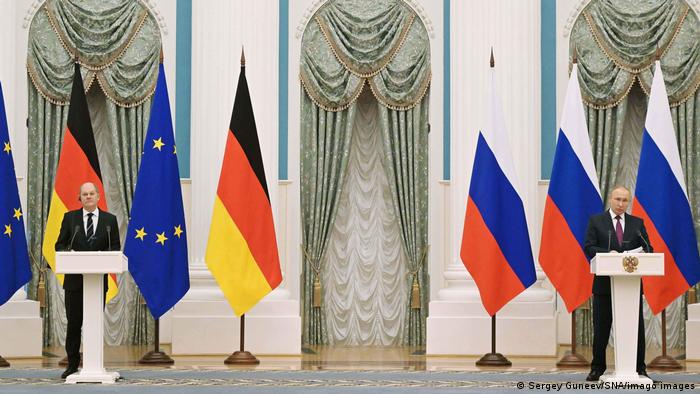 Russia's invasion of Ukraine has had major consequences for Germany's foreign policy.

"The situation is serious. The peace in Europe is built on not changing borders. We must return to these principles: State sovereignty is respected. Borders will not be moved."

Foreign Minister Annalena Baerbock was more emotional, warning that the world would "not forget this day of shame."  "Germany is stunned, but not helpless," she said, announcing a package of "massive sanctions."

Annegret Kramp-Karrenbauer, former defense minister in Chancellor Angela Merkel's previous center-right government, admitted policy failures. Taking to Twitter in English on Thursday she wrote she was angry at Germany for not preparing any deterrence and showing military strength.

"This attack will have severe political and economic consequences for Russia," Vice Chancellor and Economy and Climate Minister Robert Habeck, from the Green Party, said.

Finance Minister Christian Lindner, the party chairman for the neoliberal Free Democrats (FDP), said on Thursday that Russia faces tangible and painful sanctions, but his goal of limiting new borrowing in Europe's biggest economy to €100 billion ($113 billion) in 2022 was a benchmark that remained unchanged in the crisis.

Germany imports 55% of its natural gas from Russia, but Scholz's decision to put Nord Stream 2 on hold on Monday, following Moscow's recognition of the two breakaway regions in eastern Ukraine, was itself an awkward U-turn for a chancellor who has not yet been in office for three months.

At the start of his tenure in December, Scholz was still describing the gas pipeline in the Baltic Sea — recently completed but not yet online — as a purely private economic project, even though it is owned by a company that the Russian state has a controlling stake in. Now, Nord Stream 2 proves to be very much the political tool that many of Germany's geopolitical partners, especially the US government, had always seen it as.

The Kremlin's move also leaves the policies of Scholz's predecessor, Angela Merkel, in ruins. Following the annexation of Crimea in 2014, Merkel invested much effort into putting the Minsk Protocols into place: joining France in efforts to mediate between Russia and Ukraine and create a fragile peace.

"What is also in ruins now are the Minsk Protocols, and that is a large part of Germany's Russia policy," said Thomas Kunze, head of the Moscow office of the Konrad Adenauer Foundation — an institution affiliated with Merkel's center-right Christian Democratic Union (CDU). "Germany, the former chancellor and the current chancellor have all been working hard to implement Minsk. Now, with Russia's decision, that is no longer possible."

History of hostility and of friendship

The latest course changes reflect fluctuations in Germany's policy toward Russia that reach back decades. Gustav Gressel, a senior policy fellow at the Berlin office of the European Council on Foreign Relations (ECFR), told DW that the psychological roots of Germany's ties to Russia lie deep in their shared history in the 20th century.

"The Russia-centeredness rested on two main motives," he wrote in an email. "First, guilt from World War II [which was started by Germany and cost tens of millions of Russian lives — eds.] and the longing for historic reconciliation, and secondly on sympathy for Russia based on a common sense of victimhood and being deprived of historical rights by the West."

In other words, Gressel argues that what Versailles was to Germany after World War I, when many Germans felt aggrieved by the punitive terms of the treaty, the post-Cold War order was to Russians. "Russia dislikes the post-Cold War order, the dissolution of the USSR, etc," said Gressel. "They often described it in front of a German audience as 'Versailles.' They want to reverse that order, if necessary by military force."

Nevertheless, the Federal Republic's first chancellor, Konrad Adenauer, drove a hostile policy toward the Soviet Union, and worked hard to orient West Germany toward its Western allies, the so-called Westbindung or Westintegration.

That was modified by Social Democrat Chancellor Willy Brandt (who governed from 1969 to 1974), whose famous "Ostpolitik" aimed to normalize relations with Communist Eastern Europe.

"The concept of Ostpolitik has changed its form numerous times since it was coined by Willy Brandt in 1969," said Rafael Loss, security policy specialist at ECFR. "He wanted to establish productive relations and overcome the historical burden that Germany had accumulated with the terror of the Second World War. But Willy Brandt was only able to pursue his kind of Ostpolitik because Germany was so integrated into the Euro-Atlantic political West."

The idea of hoping to soften the Soviet Union with friendship, also taken up by Brandt's successor, Helmut Schmidt, was a policy summed up in a phrase coined by one of Brandt's most influential Cabinet ministers, Egon Bahr: "change through rapprochement."

The 1980s and 1990s may have been the high point of German-Russian relations, when Chancellor Helmut Kohl enjoyed an increasingly fruitful relationship with Soviet leader Mikhail Gorbachev. That led to various deals ensuring that Russian troops left East Germany after the fall of the Berlin Wall in 1989.

More recently, the German government has been eager to turn a softness on Russia into economic benefit. Change through rapprochement became "Wandel durch Handel," or "change through trade." "Germany has benefited from fairly cheap energy over the last 20 years," said Rafael Loss. 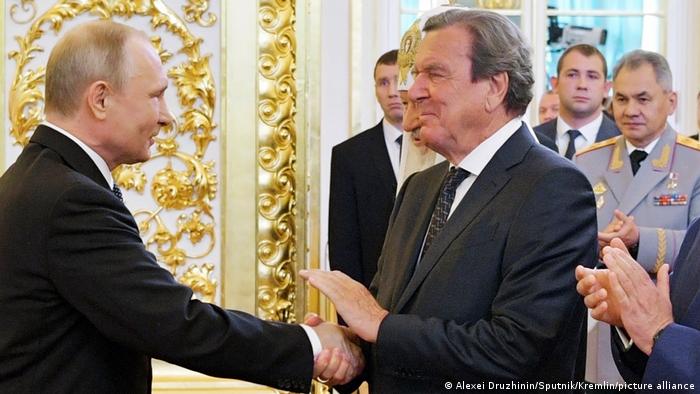 But economic rapprochement has sometimes embarrassed the German government: Former SPD Chancellor Gerhard Schröder spent much of his last few months in office ensuring that Nord Stream deals would be in place to bring Russian gas to Germany. He later joined the boards of the companies operating the pipeline.

But the past few weeks have shown that those policies, beneficial as they have been economically, have not necessarily granted Germany special influence over Russia.

On Thursday, Schröder took to LinkedIn to write that there had been many mistakes on both sides. "But Russia's security interests do not justify the use of military means either." Schröder wrote in a post on LinkedIn.

"With the necessary sanctions, care must be taken not to completely cut the remaining political, economic and civil society ties that exist between Europe and Russia," Schröder wrote.

But on Thursday even the staunchest Russia supporters on the fringes of German politics did not voice support for Putin's invasion.

This article was first published on February 22 and updated with German government reactions to the invasion on Thursday, February 24.

What are the Minsk agreements?