German Chancellor Merkel has highlighted her party's common ground with its Bavarian ally as the parties plot a course for the upcoming election. The meeting comes amid a surge in support for the Social Democrats. 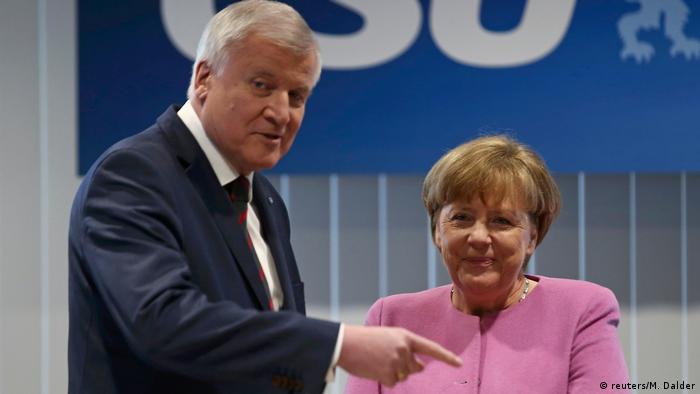 Newly announced as the Social Democrats' candidate to be chancellor, Martin Schulz was a hit with the party faithful in Germany's old industrial heartland. The big test will be winning over the rest of the country. (02.02.2017)

Court: Bavarians have no right to vote for Merkel

Two Bavarian lawyers are challenging a basic tenet of Germany's political landscape in the election year - the bond between the CDU and the CSU. They lost the first battle, but want to go to the constitutional court. (02.01.2017)

Merkel also stressed that there is much more that unites the two so-called "Union" parties than divides them. Both party leaders appeared to downplay disagreement over migrant policy - but the issue has not entirely fallen off the radar.

"The CSU has always put its own accent on one point or another," Seehofer, who has been pushing for a cap on migrants that Merkel opposes, told reporters. "We don't play this game for votes every day, every week. Rather, we follow our path steadily and continuously."

Merkel set aside Sunday and Monday to meet with the CSU in Munich, underscoring the importance she places on improving relations within the troubled conservative alliance. The two parties form a single bloc in the federal parliament and a recent court ruling held that Bavarian voters did not have a right to cast their ballots for the CDU as the CSU  was their local alternative.

In a bid to hold on to power come September, the CDU and CSU will carve out a campaign strategy emphasizing domestic and international security and cohesion within German society.

The push for unity in the conservative union came amidst a surprising revival of support for the Social Democratic Party (SPD) after it put forth former European Parliament President Martin Schulz as its candidate for chancellor.

In an opinion poll published by the German newspaper "Bild am Sonntag," the SPD scored 29 percent - a six-point jump in support that was the largest pollster Emnid ever recorded for the party.

Support for the CDU/CSU union, on the other hand, fell by 4 points to 33 percent.

An opinion poll conducted for the German public broadcaster ARD on Thursday showed that the CDU/CSU raked in 34 percent while the SPD was up eight points at 28 percent. On Monday, the CDU and CSU heads will also meet with the SPD counterparts in Munich to discuss Germany's asylum laws in light of the December terror attack on a Christmas market in Berlin. The three parties currently form a grand coalition federal government led by Merkel.

They are set to discuss surveillance of suspects who are deemed "threats," repatriation and preventing future terror attacks.