The German chancellor said negotiations were necessary in order to evacuate Afghans who worked with the German government. Meanwhile, the top Afghan resistance leader said he is "ready to stop fighting" the Taliban. 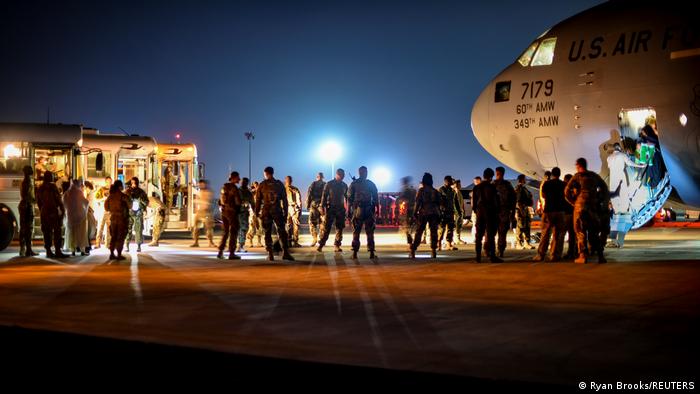 German Chancellor Angela Merkel said Sunday she is in favor of opening a political dialogue with the Taliban, the Islamist group which controls most of Afghanistan.

"Regarding the Taliban, the fact is that of course we have to talk to them because they are now the ones who have to be addressed," Merkel said while on a visit to the western German city of Hagen, which was hit with massive flooding earlier this year.

She said the talks were necessary to help evacuate Afghans who were left behind.

"We want to get people out of the country who have worked for German development organizations in particular and who now feel threatened," Merkel added.

She said dialogue would allow the flow of humanitarian aid into Afghanistan to continue. The German leader said it was a "good signal" that Kabul international airport was recently reopened for flights.

CDU chancellor candidate Armin Laschet, who was with Merkel on the trip, has also expressed support for talks with the Taliban

What is the Taliban stance?

Merkel's comments come after a Taliban spokesperson told the Welt am Sonntag paper on Sunday that the group would like "strong and official diplomatic relations with Germany."

Merkel did not say she supports full diplomatic relations with Taliban-controlled Afghanistan. German Foreign Minister Heiko Maas said this week that Germany could reopen a diplomatic office in Kabul if the Taliban respect "fundamental human and women's rights," among other conditions.

What is happening in Afghanistan?

Although the Taliban control the vast majority of the country, a resistance force has remained in the holdout Panjshir region. On Sunday, however, key opposition leader Ahmad said he is open to negotiations.

Massoud heads the National Resistance Front of Afghanistan (NRFA) based in Panjshir.

"The NRF in principle agree to solve the current problems and put an immediate end to the fighting and continue negotiations," Massoud said in a post on social media.

"To reach a lasting peace, the NRF is ready to stop fighting on condition that Taliban also stop their attacks and military movements on Panjshir and Andrarab," he added.

The two sides could soon meet with an Ulema religious council to broker a political settlement..

Why are the Taliban back in power?

The United States had invaded Afghanistan in 2001 in pursuit of al-Qaeda, the terrorist organization which was behind the 9/11 terrorist attacks. During the invasion, US-backed forces deposed the Taliban, which had controlled the country since 1996 and implemented a strict version of Islamic law.

In April, President Joe Biden announced a complete withdrawal of US troops from the country after nearly 20 years, with NATO countries such as Germany also following suit.  The pullout allowed the Taliban to quickly overwhelm the US-aligned Afghan government and reestablish control over the capital on August 15.

US Secretary of State Antony Blinken is expected to visit Germany next week, where he will hold talks with German officials about the situation in Afghanistan. Some German leaders, such as Bavarian premier Markus Söder, have slammed the US withdrawal.