A Taliban spokesman has said Germans are welcome in Afghanistan and that the group hopes Berlin will open diplomatic ties. The militant Islamist group is aiming for international legitimacy — as well as substantial aid. 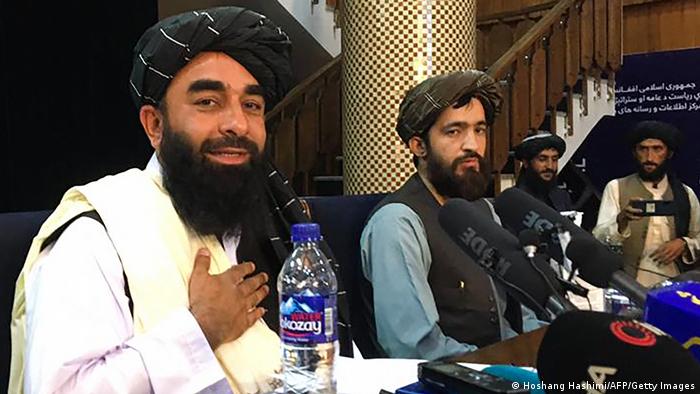 In an interview published Sunday, Taliban spokesman Zabiullah Mujahid told the German newspaper Welt am Sonntag that the militant group now in control of most of Afghanistan would like diplomatic relations and financial support from Germany.

"We want strong and official diplomatic relations with Germany," Mujahid told the paper.

In addition to diplomatic relations, the Taliban also seek financial support, humanitarian aid and cooperation in health, agriculture and education from Germany.

"Unfortunately, they then joined the Americans. But that is forgiven now," Mujahid said.

Germany closed its embassy in Kabul with the Taliban's victory and relocated Ambassador Markus Potzel to Doha, Qatar, but the German government remains in contact with the Taliban.

Maas: 'No getting away from engaging in talks with the Taliban'

Berlin is hoping for some level of cooperation to bring more eligible Afghans out of the country. The Taliban have a political office that functions roughly as a foreign ministry might in Doha.

While German Foreign Minister Heiko Maas has been keen to stress that diplomatic representation does not equal recognition of the Taliban government, he did say last week: "If it were politically possible and if the security situation permits, then Germany should also have its own embassy in Kabul again."