Foreign Minister Heiko Maas has decried US escalation and called on Iran to abide by the existing nuclear agreement. He said a "spark" could set off a "wildfire" that would have implications for Europe. 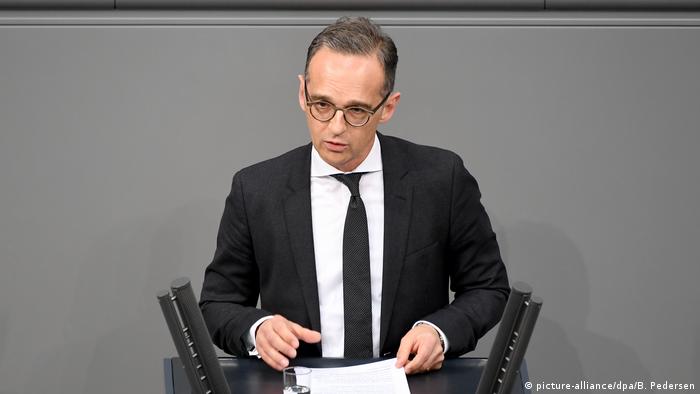 Speaking at Germany's parliament, the Bundestag, on Wednesday, Foreign Minister Heiko Maas warned of the implications of escalating tensions between the US and Iran.

The special session was convened to address the fate of the Iran nuclear deal and the increasingly acrimonious standoff that has been developing between the two countries over the past week.

Maas said the current showdown between the US and Iran was "extremely serious," pledging, "We must, and will, do all we can to prevent a military escalation."

Speaking of the imperiled future of the Iran nuclear deal — officially known as the Joint Comprehensive Plan of Action (JCPOA) — Maas said its collapse would have far-reaching consequences for Germany and Europe as well as for the Middle East.

Maas was critical of the United States — one of the original signatories of the deal alongside Iran, China, Russia, Germany, France, the UK and the EU — for unilaterally withdrawing from the deal one year ago at the insistence of President Donald Trump, calling the move "incomprehensible."

He also chided Iran for its 60-day deadline issued to other JCPOA partners, which warned that unless they found further incentives for Iran, then Tehran would stop keeping to some of its key JCPOA commitments.

Looking for a reason to stay in the treaty

Last week, Iranian President Hassan Rouhani announced that Iran would abide by some but not all of the commitments it made under an agreement that promised the loosening of sanctions if Iran would give up its nuclear ambitions.

The EU, which has implored Iran to stand by commitments it made under the deal's framework in 2015, is interested in dialogue as a means to keep the deal in place, according to Maas.

Maas said a collapse of the deal "would be a major setback in the fight against the proliferation of nuclear weapons."

The dangers of 'maximum pressure'

In recent weeks, verbal threats between Washington and Tehran have evolved into increased US accusations of malign Iranian behavior related to the alleged sabotage of Saudi Arabian oil tankers and unspecified threats against the US and its allies.

The US used those threats, for which it has offered no evidence, as a pretext to move warships, aircraft carriers and a bomber squadron into the region.

Maas warned that the US strategy was a dangerous one: "We do not believe the strategy of unilateral maximum pressure will help end the impasse. Maximum pressure always carries with it the threat of unintended escalation."

Further, Maas said that in this current high-stakes situation a "spark" could very well set off a "wildfire" in the region.

Secretary of State Mike Pompeo has said the US is not seeking conflict in Iran, after high-level talks in Russia. Meeting with President Vladimir Putin and top officials, he also discussed ways to mend US-Russia ties. (15.05.2019)