Germany's foreign minister has described Turkey's offensive against Syrian Kurds as an "invasion" and said Berlin saw it as illegitimate. But the Turkish president's spokesman said Ankara's forces merited gratitude. 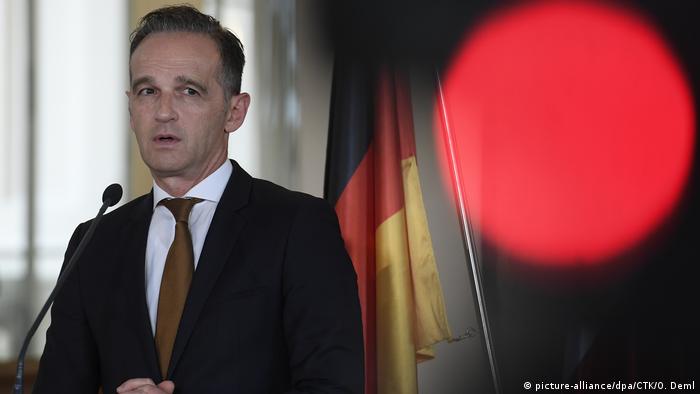 "After everything we know and after everything that Turkey itself has cited as a legal basis, we cannot share that view," Maas said in remarks broadcast by the public broadcaster ZDF.

"We do not believe that an attack on Kurdish units or Kurdish militias is legitimate under international law," the foreign minister added.

His comments were echoed by other top officials, including Defense Minister Annegret Kramp-Karrenbauer.

At a conservative party congress, she said Turkey was violating the "basis of the post-World War II order," whereby conflicts should be solved by diplomacy instead of force.

Turkey has cited links between the Syrian Kurdish YPG militia and the Kurdistan Workers' Party (PKK) fighting against the Turkish state as justification to clear its border of "terrorists" in self-defense.

Since the Turkish military and its rebel proxies launched the offensive on October 9, at least 160,000 people have been displaced and scores killed. Human rights organizations have warned that the Turkish-led offensive may have committed war crimes, including targeting civilians and carrying out summary executions.

Maas warned that Germany was keeping an eye on Turkey's actions following a fragile US brokered truce.

"We have been very clear that we are keeping other measures open — and they might also include economic sanctions."

According to a survey conducted by Forschungsgruppe Wahlen pollster, 91% of Germans are against arms exports to Turkey and 65% support punitive economic measures against the country due to its offensive in Syria.

Maas also said Sunday that Berlin would aim to end to the fighting. "We will do everything for this truce to last longer than just the five days, and that the invasion is stopped for the time being," he said.

EU leaders also oppose the idea of relocating up to 2 million Syrian refugees living in Turkey into a proposed "safe zone" in northeast Syria.

"We also do not agree that Syrian civil war refugees who are now in Turkey are then sent to northeast Syria in this way into this security zone, possibly against their will," Maas said.

He said the topic should be discussed with Ankara together with the EU-Turkey migration deal, which sees Brussels pay billions to Turkey to host 3.6 million civil war refugees.

"Because we will not pay money for things that, according to our perspective, are not legitimate or legal," Maas said.

In a notable choice of words, Maas described Turkey's offensive as an "invasion" despite threats from President Recep Tayyip Erdogan not to label it as such.

Erdogan's spokesman Ibrahim Kalin on Monday contradicted Maas, telling DW that Turkey's "European friends should be thankful to our soldiers for doing this very dangerous but important work" and adding that the cease-fire would not be extended unless all YPG "terrorists" had left the area.

Erdogan lashed out at Maas personally last week, calling him a "political dilettante." On Sunday, however, Maas appeared unconcerned.

"The bottom line is that I still prefer when Mr. Erdogan shoots with words and not with rockets," Maas said.

Northern Syria: How stable is the ceasefire?

Washington and Ankara have agreed to a ceasefire in northern Syria, but the deal leaves a lot of questions unanswered. Experts say these will present hurdles on the way to establishing a safe zone. (18.10.2019)

Turkish-Kurdish cease-fire on edge as one soldier is killed

Turkish forces said one soldier has been killed and another injured by the YPG in northern Syria, threatening a fragile cease-fire. President Erdogan said Turkey would "crush the heads of terrorists" who don't withdraw. (20.10.2019)